Add an Event
Newswire
Calendar
Features
Home
Donate
From the Open-Publishing Calendar
From the Open-Publishing Newswire
Indybay Feature
Related Categories: California | San Francisco | Labor & Workers
After 90 Days 700 IUOE Local 39 Kaiser Engineers Forced Back Without Real Gains
by WorkWeek
Monday Dec 20th, 2021 9:17 PM
700 IUOE Local 39 Kaiser Engineers have had their strike defeated after being on the picket lines for three months. Their own union leadership refused to mobilize their other members in other in hospitals and industries and the California union officials refused to mobilize the membership. The picket lines were also crossed by SEIU UHW, CNA, NUHW. 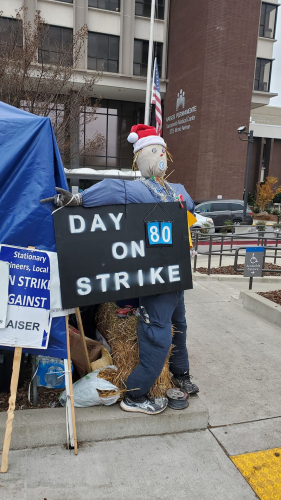 original image (1080x1920)
After Three Months On Strike, 700 Kaiser IUOE Local 39 Engineers and Biomeds Go Back To Work With One Contract Gain

Kaiser IUOE Local 39 strike of 700 stationary engineers and biomeds came to an end after 3 months of 24 hour picketing with one gain on the contract that engineers could not be forced to travel to other locations to work. Kaiser spent millions of dollars bringing in scabs from throughout the country to bust the strike and no organized effort was made to stop this union busting. The Newsom administration supported by the IUOE and other unions refused to enforce health and safety laws at Kaiser hospitals despite the dangers because of floods and failures of equipment by uncertified scabs.

Although IUOE Local 39 has more than 2,000 members in San Francisco and 20,000 in Northern California there was no mobilization of their membership or even information to their members about the strike and how to support it. In fact there was no mass picket of their members even in San Francisco where they represent office building engineers, other hospitals and city engineers. The San Francisco Labor Council leadership also refused to organize to get locals to support the picket lines on a regular basis. Despite a couple of one day protest strikes by SEIU UHW and NUHW unions including the CNA crossed the picket lines helping Kaiser bosses break the back of the strike.

For the union this is the second strike defeat. Seventy Macy’s engineers went on strike for parity with other building engineers and their strike was also broken after many months and many of their members are still without work. Again, the Local 39 union leadership refused to mobilize the membership or even inform them about the strike. When rank and file members went to union meetings they were insulted by their own union officials.

IUOE Local 3 Operating Engineers, a sister local were also not mobilized to support striking Local 39 Kaiser engineers and biomeds and the IUOE International had no information about the strike of their own members at Kaiser. There was no use of the website and even social media to provide information or even build support for both strikes and there was a corporate media blackout with very little information. Also, the hundreds of thousands of union members who are members of Kaiser were not educated or mobilized on how to support the strike so what could have been a reservoir of support for the strike was untapped.

This defeat of the Kaiser Local 39 engineers will certainly be used by the Kaiser management to go after the other unions in the system and also expand the contracting out and outsourcing. This was a prime example of business unionism and the failure of the union leadership to prepare for this battle, educate their membership and fight to mobilize the rest of the labor movement.

https://www.facebook.com/Local39OperatingEngineers
Day 90 – The space where we march has turned into an encampment of renegades. Officially untethered and in the land of the lost, we find kinship with our fellow Engineering nomads. Kaiser’s executive vultures have fed upon our withering spirit for 90 straight days, and it still isn’t enough to satiate their appetite. Adding insult to injury, our union has plated what’s left of us as a final course to Kaiser’s unending feast.
We engineers may be faced with returning to work after 90 days of suffering through the back and forth, without a new contract and without choice. We will have to tend to the desperation of deteriorating facilities and clean up the catastrophes that have piled up in our absence. But where were they in our desperation? Where was Kaiser in our time of need as our unpaid bills piled up? We would love to wait for an answer, but we know the wait would far exceed these 90 days of torment. Kaiser Permanente Thrive #local39engineers #nounionleftbehind #fightingforfairness #kaiserstrike #solidarity #WeWillBeHeard
https://www.facebook.com/Local39OperatingE...
Add Your Comments
Support Independent Media
We are 100% volunteer and depend on your participation to sustain our efforts!