Add an Event
Newswire
Calendar
Features
Home
Donate
From the Open-Publishing Calendar
From the Open-Publishing Newswire
Indybay Feature
Related Categories: San Francisco | Education & Student Activism
Demos, Billionaires & War On Teachers & Public Education From SFUSD To OUSD
by Labor Video Project
Tuesday Dec 14th, 2021 3:02 PM
Mass layoffs are threatened against teachers and staff at San Francisco Unified School District SFUSD and it is being backed up with the threat of a state take-over of the school district unless the cuts are made. This is also taking place in Oakland at the OUSD against Oakland Education Association members. Jack Gerson who is a retired OEA executive member and with the OEA bargaining committee and representative to the CTA State Council. He talks about how the Democrats and the billionaires are busting up public education while pushing charters and privatization. 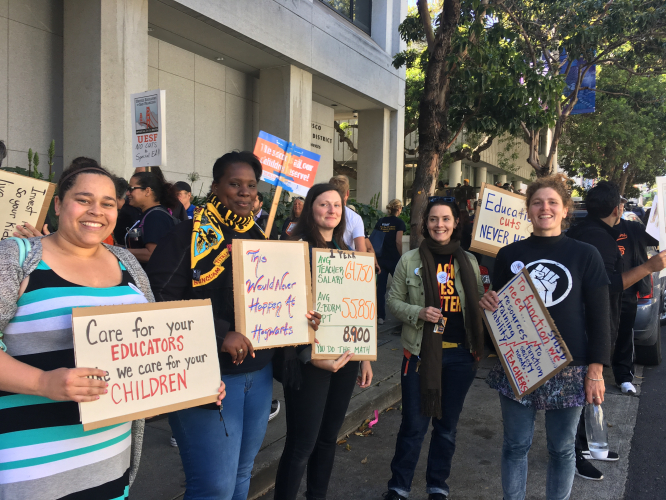 original image (4032x3024)
Teachers in the San Francisco Unified School who are members of the United Educators of San Francisco and Oakland Unified School District whose members are with the Oakland Education Association face a frontal attack. Using the threat of a take-over, the state is demanding that school districts layoff hundreds
of teachers and staff at the districts or face a trusteeship by State Superintendent of Instruction Tony Thurmond.
Despite a budget surplus of over $31 billion in California, the State legislature which is controlled by the Democrats with a super majority has failed to fully fund education in California and the state is still behind many others in funding. California is still 30th in funding for public education.
Jack Gerson who was formerly on the Executive Board of OEA and and on the bargaining committee and a representative to the State CTA when he was teaching discussed the history of the CTA in allowing charters and privatization. Both organizations supported Proposition 39 which allowed for co-locations
and deregulation of charter schools.
He also talks about the history of present SFUSD superintendent Vincent Matthews who is demanding the cuts. He also discusses the role of Eli Broad, Reed Hastings and other billionaires in pushing privatization in California including testing and charters. He looks at the history of Vincent Matthews from being principal
of the for profit Edison school in San Francisco to his role appointed by state privatizers in attacking teachers
in Oakland and other districts.
Part of this according to Gerson was how state trusteeships of school districts was use to bring in charters and sell off school property to developers and speculators.
He also discusses the key role of the Democratic Party which the CTA and CFT have supported with hundreds of millions of dollars. These same politicians according to Gerson such as California State Superintendent Tony Thurmond were critical in helping to put charter advocates in key posts to allow further privatization.
This interview was done on 12/13/21.
Additional media:
Do not divest from direct student services to balance S.F. school budget
‘A cruel austerity agenda is the antithesis of what our students and schools need’
https://www.sfexaminer.com/opinion/do-not-divest-from-direct-student-services-to-balance-s-f-school-budget/

The AFT, NEA And The Privatization Drive Against Public Education By Jack Gerson
https://youtu.be/-18RVbBsnas 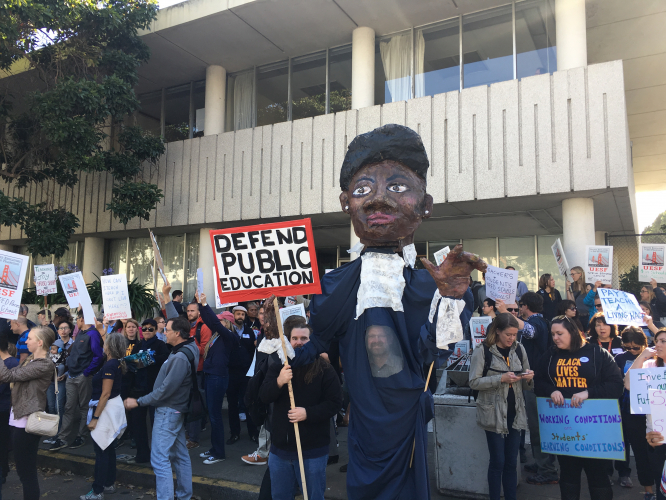 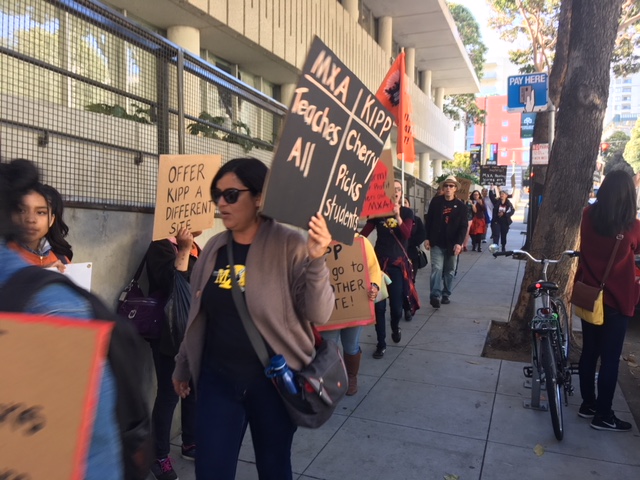 The billionaire Fisher family which owns the GAP and the A's also are pushing to destroy the Malcom X Academy in Hunters Point Bay View. Doris Fisher and John Fisher's wife Laura Fisher who are on the board of KIPP in San Francisco are suing SFUSD to grab more rooms from the Malcom X Academy. The Fisher family, Zuckerberg, Reed Hastings andn other billionaires control the State Board of Education and their ally is State Superintendent of Public Instruction Tony Thurmond who is threatening to put SFUSD and OUSD unless massive layoffs and cutbacks take place in the schools. The Democrats who have a super majority in the California legislature have shielded these billionaires from a capital tax to fully fund public education.
https://youtu.be/u52tZhMIt7M
§SFUSD Superintendent Vince Matthews Shut Down Schools In Oakland
by Labor Video Project
Tuesday Dec 14th, 2021 3:02 PM 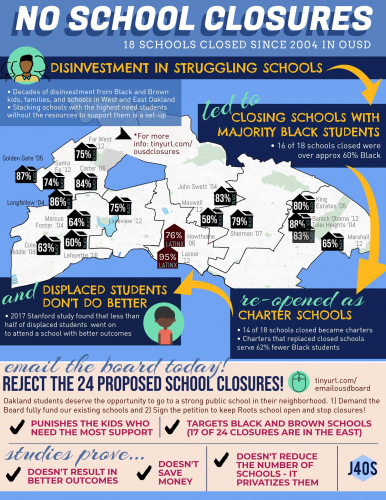 original image (1583x2048)
Present SFUSD superintendent Vince Matthews was personally involved in the take-over of the Oakland Unified School District and imposing austerity and budget cuts. Over 24 public schools were closed nearly all in the flatlands with Black and Brown students while opening up charter schools. He is now engaged in the same tactic at SFUSD.
https://youtu.be/u52tZhMIt7M
Add Your Comments
Support Independent Media
We are 100% volunteer and depend on your participation to sustain our efforts!