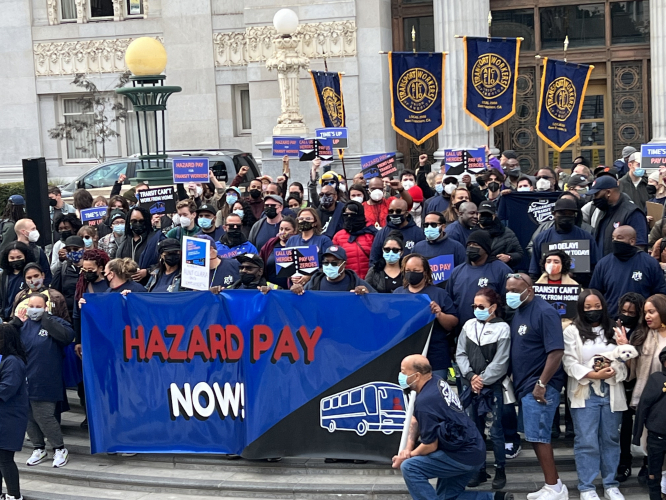 original image (4032x3024)
Over 100 East Bay ATU 192 transit workers and supporters rallied on December 4, 2021 at Oakland City Hall to demand hazard pay for the dangerous work they are doing during the pandemic.

They reported on the dangerous conditions and the fear that they have of also infecting their families and relatives.

The AC Transit Board of Directors has received $150 million in Covid funding but refuses to use it for hazard pay. Workers and unionists from other transit agencies attended and spoke at the rally.

ATU LOCAL 1560 Members "Drivers" are being forced to work without Proper Training by the RTA
https://atulocal1560.org/local-1560/news

Additional Information:
https://www.facebook.com/laworkerscouncils/
Production of Labor Video Project
http://www.labormedia.net
https://youtu.be/brk31Pk1QYc
Add Your Comments
Support Independent Media
We are 100% volunteer and depend on your participation to sustain our efforts!