Add an Event
Newswire
Calendar
Features
Home
Donate
From the Open-Publishing Calendar
From the Open-Publishing Newswire
Indybay Feature
Related Categories: U.S. | Womyn
Stop the Fascist Assault on Abortion Rights!
by Curt Wechsler
Thursday Dec 2nd, 2021 4:13 PM
Now is the time for everyone, everywhere, to get in the streets to stop this fascist assault on abortion rights! 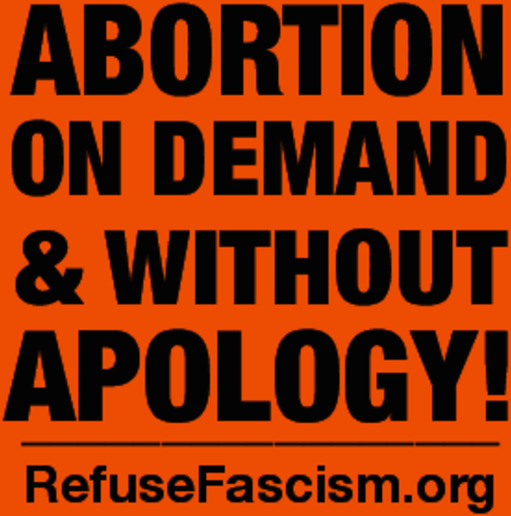 Download PDF (402.7KB)
The war on abortion, waged by woman-hating, theocratic Christian fascists for decades, has been the linchpin of a vicious American fascist movement built on white supremacy, misogyny, and xenophobia; they have terrorized women at abortion clinics, murdered abortion doctors, and mobilized massive marches of indoctrinated followers who see women as breeders of children and the property of men. They were a key organizing force behind the rise of Trump and Pence to the White House, bestowing power to a regime that then stacked the courts with
Christian fascist judges and created a pro-fascist majority on The Supreme Court, a court which is now poised to overturn the fundamental right to abortion.

Now, Texas’s horrific abortion ban advances this fascist offensive in a way that is being replicated all over the country. Their aim is nothing less than the consolidation of fascist rule, one that violently reasserts the domination of white, male supremacy over all of society and government. The Texas ban shreds the rule of law while giving legal backing and legitimation to fascist mob rule– where literally any vengeful vigilante can be awarded a bounty for spying on, snitching on, and dragging into court anyone who helps a woman seek an abortion.

This cannot stand! It is time to fight for abortion rights in the same way they were won in the first place, through massive outpourings of fury and determination to protect the right of women and girls to control their own reproduction.

All who care about the lives of half of humanity say no more! No more ceding ground to fascists. No more surrendering the fundamental right to abortion. No more waiting for the courts that are overrun with fascists to intervene. No more relying on the Democratic Party, which has conceded to and conciliated with Christian fascists as access to abortion got chipped away.

This is the time to stay in the streets using our power of sustained, non-violent protest to stop the fascist assault on abortion and declare:
In the Name of Humanity,
We Refuse to Accept a Fascist America!
Get Your Laws and Vigilantes Off Our Bodies!
Abortion on Demand and Without Apology!
https://refusefascism.org/resources/
Add Your Comments
Support Independent Media
We are 100% volunteer and depend on your participation to sustain our efforts!