Add an Event
Newswire
Calendar
Features
Home
Donate
From the Open-Publishing Calendar
From the Open-Publishing Newswire
Indybay Feature
Related Categories: U.S. | Racial Justice
Protesters Shot at Kenosha Called Heroes
by Kyle Rittenhouse is a Murderer
Tuesday Nov 23rd, 2021 2:11 AM
The three men shot by gun wielding Kyle Rittenhouse have been portrayed by the right wing as “BLM rioters guilty of assault.” But the lead prosecutor in the case, Thomas Binger, in his closing argument at the murder trial of Rittenhouse, called them heroes who risked their lives to disarm the gunman and protect the lives of other demonstrators. In the aftermath of the trial, in which Rittenhouse was pronounced not guilty, demonstrators in Oakland held up hero signs with photos of the murder victims. 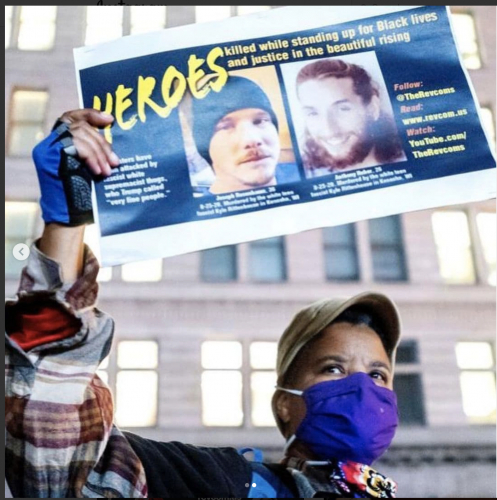 Gaige Grosskreutz is a protest medic whose his right arm was torn apart by a shot fired from point-blank range as he advanced on vigilante Kyle Rittenhouse. He watched Rittenhouse shoot and kill Anthony Huber directly in front of him. Also murdered was an unarmed Joseph Rosenbaum who carried only a plastic bag with toothbrush, toothpaste, socks, deodorant and the like.

Despite these facts, Rittenhouse has been called a "hero" by far-right media since the incident, and continues to be since his non-guilty verdict.

Turning the tables, demonstrators in Oakland and across the US held signs with photos of the murder victims with the word splashed across them...heroes.

§Oakland demonstrator
by Kyle Rittenhouse is a Murderer
Tuesday Nov 23rd, 2021 2:11 AM 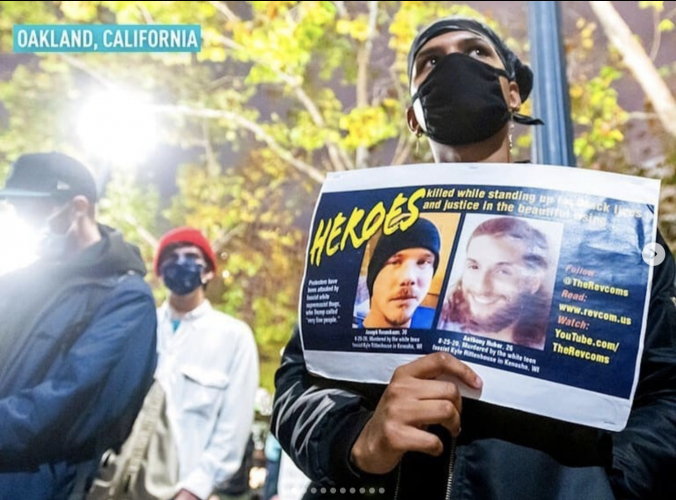 original image (1390x1028)
Add Your Comments
Support Independent Media
We are 100% volunteer and depend on your participation to sustain our efforts!