America's Youngest Voters: Catalysts for Change and Targets of Suppression 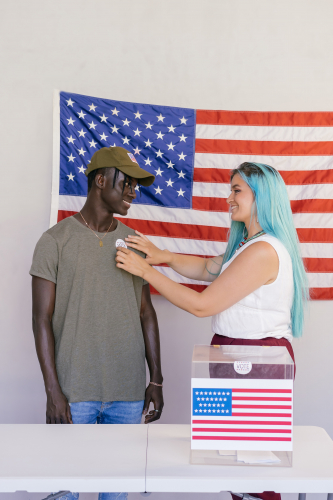 Experts in the area of the voting rights and voting behavior of the "Millennials" and "Plurals" (Generation Z) discuss America's future.

Following a successful career in the field of entertainment research Mike Hais was an Assistant Professor of Political Science at the University of Detroit, where he taught graduate and undergraduate courses in American government and political institutions, the legislative process, the U.S. presidency, and political behavior. He also conducted political polls for a wide array of candidates, newspapers, and office holders. Mike has co-authored three books on American generational change and its impact on society and politics—Millennial Makeover (2008), named a New York Times favorite book, Millennial Momentum (2011), and Millennial Majority (2013) as well as Healing American Democracy (2018), that focused on defending and preserving the constitutional order in the United States.

Yael Bromberg is a constitutional rights attorney with 20 years of experience in community organizing, advocacy, and campaigns. As Principal of Bromberg Law LLC, she represents and counsels local, state, and national democracy organizations, in addition to individual clients, on a range of federal and state cases and projects related to constitutional law, civil rights, election law, voting rights, and free speech. Yael is a lecturer at Rutgers School of Law, where she teaches "Election Law & the Political Process."

She formerly served as Chief Counsel for Voting Rights with the Andrew Goodman Foundation, a national organization in 25 states whose mission is to make youth voices and votes a powerful force in democracy. Her legal scholarship, "Youth Voting Rights & the Unfulfilled Promise of the Twenty-Sixth Amendment," published in the University of Pennsylvania Journal of Constitutional Law, was dubbed a "groundbreaking study" by Slate and has emerged as a blueprint for protecting the youth vote.

Yael, who has a JD from Rutgers Law and an LLM in Advocacy from Georgetown, has worked in the national office of Common Cause and at Georgetown University Law Center’s Civil Rights Clinic and Voting Rights Institute . Amendment,” was recently published in the University of Pennsylvania Journal of Constitutional Law. Yael has received numerous honors including the Eli Jarmel Memorial Award for greatest interest and proficiency in public interest and the Eric Neisser Public Service Alumni Award in recognition of her work in democracy law.

Winograd is currently President and CEO of the Campaign for Free College Tuition, a bi-partisan, multi-generational effort to make college tuition free in all fifty states. His recent writings are focused on issues that are of concern to Millennials, such as greater affordability of higher education, more affordable housing for first time home buyers and greater empowerment of local decision-making.

Winograd served as the Executive Director of the Institute for Communication Technology Management (CTM) at USC’s Marshall School of Business from 2001 until his retirement in June of 2009. He served as senior policy advisor to Vice President Al Gore and director of the National Partnership for Reinventing Government (NPR) from December 1, 1997 until January 20, 2001.

Winograd earned a Bachelor of Business Administration and attended Law School at the University of Michigan. He resides in Arcadia, CA.
Added to the calendar on Mon, Nov 22, 2021 1:22PM
Related Categories: California | Government & Elections
Add Your Comments
Support Independent Media
We are 100% volunteer and depend on your participation to sustain our efforts!