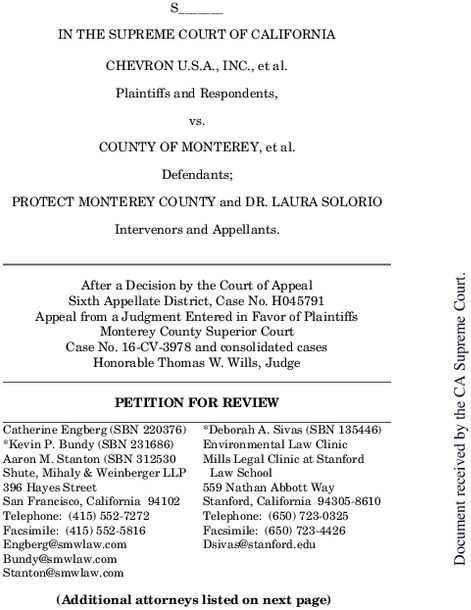 Today’s petition challenges an October appeals court ruling that the local ordinance, Measure Z, which passed in 2016 with overwhelming voter support, is preempted by state oil and gas laws. Measure Z would have prohibited land uses that support new oil and gas wells. It also would have phased out oil industry wastewater disposal over the next five to 15 years.

“Voters spoke loud and clear that we want to move away from the polluting fossil fuel industry. We’ll keep fighting for voters to be heard,” said Dr. Laura Solorio, president of Protect Monterey County. “We need Measure Z more than ever, and we have to protect local communities’ power to take a stand against oil industry pollution.”

“Time and time again, courts have upheld the power of cities and counties across California to protect their residents from dangerous oil operations. There’s no reason to chip away at that power now,” said Hollin Kretzmann, an attorney at the Center for Biological Diversity’s Climate Law Institute, part of the team representing Protect Monterey County in the case. “We need the California Supreme Court to step in and restore the balance of decision-making power between the state and local governments.”

Whatever the California Supreme Court’s decision, the case puts additional pressure on Gov. Gavin Newsom to protect people from fossil fuel pollution statewide. Newsom has recently taken promising steps, proposing a 3,200-foot buffer between oil wells and communities and a ban on hydraulic fracturing, or fracking, that would begin in 2024. But Newsom has also continued to approve new oil and gas permits by the thousands.

Local residents formed Protect Monterey County to advocate for health and environmental protections against oil production in the county. After the county’s board of supervisors rejected commonsense protections, the group gathered support for the Protect Our Water: Ban Fracking and Limit Risky Oil Operations Initiative, which became Measure Z. The oil industry ran a multimillion-dollar opposition campaign, but voters approved the measure by a 12-point margin.