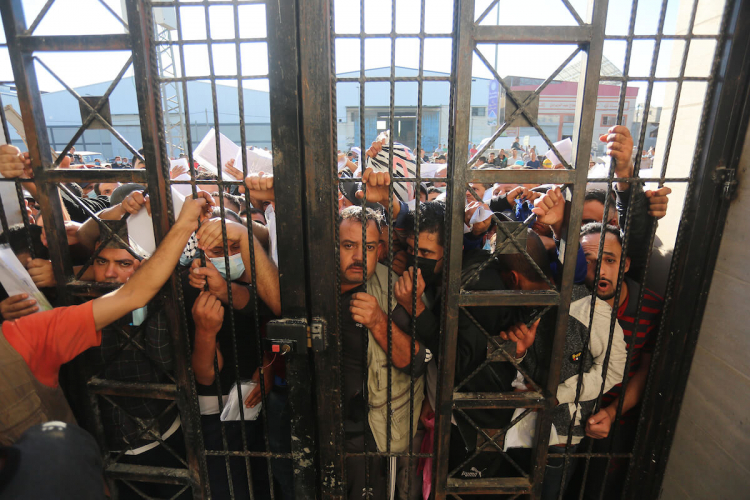 Saturday November 13, 2021 2PM PST/5PM CST/6PM EST
There has been a strong surge in support for Palestinian workers and people during the past year.

From CWA UPTE at UC, UESF and CUNY AFT PSC in New York, union locals have voted to oppose US military and economic aid and supported boycott of Israel.

This panel will look at this history and the efforts of the supporters of Israel to shut down debate, free speech andto intimidate trade unionniists and workers to remain silence about apartheid Israel and support for it by the US government, and the AFL-CIO leadership which receives funding from the US government through the National Endowment of Democracy NED.

Register in advance for this meeting:
https://us02web.zoom.us/meeting/register/tZIkfu6przkpHNZ2IM8_LwmxMNPmJPoe2urE?fbclid=IwAR3rUA9AIsTdJPEQToyWj8vhNuINcQtMhrCIatJcc-NTN3YSvyO1NkGh1Us

After registering, you will receive a confirmation email containing information about joining the meeting.

Whereas, Israel receives $2,961.04 million in foreign aid from the US to Israel which translates to $367 aid per individual. Nearly all the US bilateral aid given to Israel is military assistance. Whereas in September 2016, representatives of the two governments assented to a Memorandum of understanding pertaining to military aid to be given from the fiscal year 2019 to the fiscal year 2028. The agreement requires the US to allocate $38 billion to Israel in military aid. It is the single largest pledge made by the US in history.

Whereas, the conflict is a one-sided assault on defenseless Palestinian citizens by overwhelming military force resulting in an obscene difference in the rate at which people are being killed. Tens killed on one side, hundreds killed on the other.

Whereas Israel has targeted and destroyed hospitals, more than 1300 housing units and news agencies, killing women and children in targeted airstrikes, in violation of international law.

Whereas this conflict would be impossible without the United States’ weapons and support, creating humanitarian catastrophes acknowledged time and again by international observers.

Whereas the Palestinian people face restrictions to residency rights, citizenship, civil rights, freedom of movement, allocation of land and resources, access to water, electricity, granting of building permits, and other services (source).

Whereas, Israel has turned Gaza into an open air prison by controlling everything and everyone that is allowed to come in and out of the area including by air and by sea. The population of Gaza Strip is 50 percent children, 97% of the water in Gaza is unfit for human consumption. And the Gaza Strip was said to be unlivable by 2020 by the United Nations.

Whereas, our current social and economic reforms, achieved by labor struggle, are on the chopping block as our unions are under attack under the premise of austerity while our government sends 10 million dollars a day to support the Israeli military apparatus.

Whereas, the AFL-CIO has supported the Israeli state by purchasing bonds from Israel.

Therefore, Be It Resolved, that UPTE CWA 9119 demands that the AFL-CIO divest from the Israeli state in terms of financial support in the form of bonds and other political support.

Be it Further Resolved, that UPTE CWA 9119 expresses its solidarity with the Palestinian’s call for Boycott, Divestment and Sanctions (BDS), inspired by the movement that helped end apartheid in South Africa; and

Be it Further Resolved, that UPTE CWA 9119 will call on labor bodies to divest from Israel bonds, and cut ties with the Histadrut, Israel's racist labor federation that aggressively discriminates against Arab workers; and

Be it Further Resolved, that UPTE CWA 9119 will stand in solidarity with dockworkers in Italy, South Africa, India, Sweden, Norway, Turkey, the US west coast, and elsewhere, who refuse to handle military equipment and weapons or any other cargo destined for Israel; and

Be it Further Resolved that UPTE support the CWA in moving to stand with the demands of Palestinian labor for full human rights recognized for all people under the UN agreements. Pressing elected officials in its networks to lobby the U.S. government to end all aid to Israel until Israel complies with international law as it relates to the treatment of occupied territories and Arab citizens and dismantles all forms of Jewish supremacy and “all forms of systematic domination and oppression that privilege Jewish Israelis and systematically repress Palestinians, and end the persecution of Palestinians.”

A regime of Jewish supremacy from the Jordan River to the Mediterranean Sea: This is apartheid (2021): https://www.btselem.org/publications/fulltext/202101_this_is_apartheid
A Threshold Crossed: Israeli Authorities and the Crimes of Apartheid and Persecution (2021): https://www.hrw.org/report/2021/04/27/threshold-crossed/israeli-authorities-and-crimes-aparthei d-and-persecution
US Labor Leaders Should Stand With Palestine (2021): https://www.jacobinmag.com/2021/05/us-labor-leaders-palestine-israel-bonds-trade-unions Blacklisted Academic Norman Finkelstein on Gaza, “The World’s Largest Concentration Camp”: https://theintercept.com/2018/05/20/norman-finkelstein-gaza-iran-israel-jerusalem-embassy/

The International Federation of Journalists (IFJ), the world's largest organisation of the profession representing 600,000 members in 146 countries around the world, today joined its Palestinian affiliate, the Palestinian Journalists Syndicate (PJS), in denouncing the latest serious attack on a journalist in Hebron.


Photo credit: PJS
Photojournalist Moath Amarneh today 15 November lost sight in the left eye after being seriously injured by a rubber bullet fired by an Israeli soldier in the Surif region of the Hebron governorate, where Amarneh was covering a protest against land confiscation. He was rushed to a hospital in Hebron for emergency treatment.

Dozens of Palestinian journalists rallied on Sunday 17 November against the targeted attack on Moath Amarneh, protesting with one eye covered.

In a statement, the PJS condemned the attack, saying that "this deliberate targeting by the Israeli army of a colleague wearing a bullet-proof vest signed "Press". It also called on "international institutions to act quickly to stop this violence against the press in Palestine".

Anthony Bellanger, IFJ General secretary, said: "Once again, the IFJ deplores the attacks on Palestinian journalists by the Israeli military. The IFJ recalls that international law applies everywhere and that no government is above it. It is now time for the United Nations General Assembly to adopt the Convention for the Protection and Safety of Journalists, so that the impunity enjoyed by predators of press freedom and democracy can end in Israel as elsewhere."

The IFJ represents more than 600,000 journalists in 146 countries

U.S. Unions Are Voicing Unprecedented Support for Palestine
While some national labor groups remain silent, union locals across the country are speaking out to defend Palestinians from Israeli aggression.
https://inthesetimes.com/article/palestine-israel-labor-unions-afl-cio-aft-bds-gaza

END_OF_DOCUMENT_TOKEN_TO_BE_REPLACED
Added to the calendar on Sun, Nov 7, 2021 11:26PM
Add Your Comments
Support Independent Media
We are 100% volunteer and depend on your participation to sustain our efforts!