by Labor Video Project
IUOE Local 39 San Francisco Kaiser hospital stationary engineers and biomed techs and other workers talked about the battle and union busting at Kaiser and the coming mass strike of Kaiser around the country. 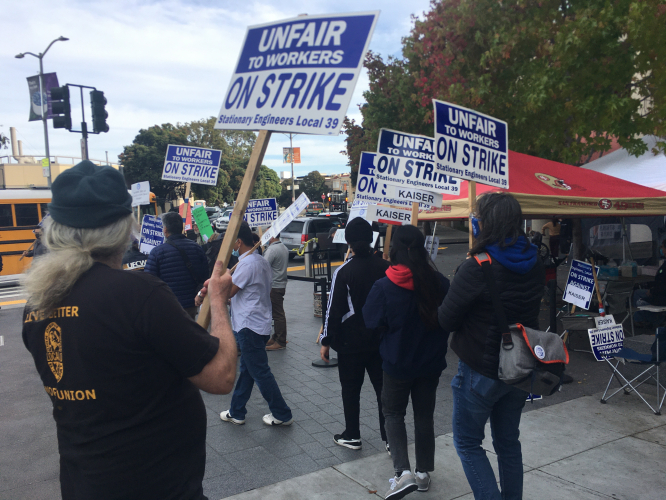 original image (4032x3024)
On Day 49 at the Northern California Kaiser strike, striking IUOE Local 39 workers and supporters rallied at the San Francisco Kaiser hospital on November 5, 2021. Seven hundred stationary engineers and biomed techs have been on strike throughout Northern California.

Workers talked about the union busting attack with a company that is making billions more as a result of the pandemic. Local 39 San Francisco Kaiser hospital Biomed lead Pablo Ramirez talked about the issues and attacks on conditions of Kaiser engineers
and also said that "we're on verge of what could be the biggest healthcare strike in American history".

Kaiser is spending millions on bringing scabs in from throughout the country to break the strike and they are not familiar with the equipment and certified to work in California hospitals yet the City
and State of California are not enforcing the laws to protect the health and safety of the patients.

National Union of Healthcare Workers NUHW assistant political director for organizing John Avalos talked about their issues and fight for mental health coverage that Kaiser is supposed to provide but does not.

He also said that the insurance and hospital industry control the Newsom's state agencies in charge of oversight of the hospital and insurance industry and are not enforcing even the laws that are on the books to protect the public and workers.

They will be joining with their own strike on November 15 for five days. Kaiser has also been fined millions for refusing to provide prompt attention for patients with mental health problems and some have even committed suicide because of the failure to get treatment.

Other workers who are members of Kaiser are also angry that Kaiser executives are trying to weaken and
destroy the union movement.

California IUOE Engineers On Strike At Macy's For Cost Of Living
https://www.youtube.com/watch?v=DA1zIgUkEoY

A union of 24,000 Kaiser Permanente nurses and other workers who say they’re understaffed and facing a revamped pay system that would fuel more shortages announced their bargaining team will vote next month to authorize a strike if needed.
https://www.dailynews.com/2021/09/27/kaiser-workers-to-vote-on-strike-authorization-in-southern-california/

Member votes will be taken Oct. 1-10. Union officials say their 24-year partnership with Kaiser is “on life support,” a situation that could impact patient care.

The current negotiations for a national contract between Kaiser and UNAC/UHCP, along with twenty other unions in the Alliance of Health Care Unions, cover more than 50,000 workers across hundreds of job classifications in nearly every geographic area Kaiser serves.

“We can no longer sit back and watch the employer dismantle the partnership that’s been in place since 1997,” union President Denise Duncan, a nurse and chief negotiator on the union’s bargaining team, said in a statement.

The union said Kaiser has proposed 1% raises to nurses and others with significantly reduced pay for new hires.

“They are proposing a two-tiered wage scale, which means new nurses coming in won’t make nearly as much,” said Belinda Redding, a registered nurse at Kaiser’s Woodland Hills facility. “Can you imagine doing the same work as someone else in your department but making significantly less money?”

Redding said that would reduce morale and exacerbate Kaiser’s already chronic staffing shortages. New nurses wouldn’t hang around long, she said, and others would be dissuaded from applying for nursing jobs with Kaiser because of the reduced pay.

Kaiser nurses currently average $40 an hour and up, she said.

In a statement issued Monday, Kaiser said the union has mischaracterized the issue.

“Our employees represented by Alliance unions earn around 26% above the average market wage, and in some places it’s 38% above market levels,” the healthcare company said. “On Aug. 25, we offered a proposal that includes wage increases for all current employees and no changes to the current retirement plan. It also guarantees no wage cuts for current employees.”

Kaiser said it’s proposing a “market-based compensation structure” for workers hired in 2023 and beyond that will allow them to be paid above market wages on average. That will allow Kaiser to continue attracting and retaining top talent, the statement said.

Hospitals and nursing homes around the nation are bracing for increased staff shortages as state deadlines arrive for healthcare workers to get vaccinated against COVID-19.

Ultimatums are taking effect this week in such states as California, New York, Rhode Island and Connecticut, prompting fears that some employees will quit or let themselves be fired or suspended rather than get the vaccine.

Kaiser said it has provided nearly $600 million in employee assistance to ensure that frontline employees have had access to alternate housing, special childcare grants and additional paid leave for COVID-19 illness and exposure.

Connor Perrett
Sat, October 16, 2021, 10:54 AM
Empty rooms in a California hospital ICU.
In this Thursday, April 9, 2020, file photo, the Intensive Care unit at the St. Vincent Medical Center building in Los Angeles is viewed. AP Photo/Damian Dovarganes
Thousands of healthcare workers in California have gone on strike or plan to strike, CalMatters reported.
They're striking over burnout and continued staffing shortages fueled by the coronavirus pandemic.
About a third of California hospitals reported "critical staffing shortages" to the federal government last week.
Thousands of healthcare workers in California have gone on strike or plan to strike over continued "critical staffing shortages" at nearly a third of the hospitals in the state.
According to a report from CalMatters, workers at more than two dozen hospitals in California went on strike at some point over the past four months. These workers included engineers, respiratory therapists, nurses, midwives, physical therapists, technicians, janitorial staff, according to the report.
Around a third of hospitals in the state this week reported "critical staffing shortages" to the US Department of Health and Human Services, according to the report. The shortages come amid increased patient demand due to the coronavirus pandemic, healthcare workers' early retirement over the past year, and other stresses put on the system by the pandemic, CalMatters reported.
Unions that represent healthcare workers told the outlet that the shortages existed before the COVID-19 outbreak nearly two years ago, but said the pressure of the pandemic has pushed the staffing issues to new levels. In addition to concerns over staffing, strikes have also been fueled by disagreements regarding pay, according to the report.
The unions say traveling healthcare staff brought into the state to make up for the shortages get paid more than the full-time staff at the understaffed hospitals.
Members of the United Nurses Associations of California/Union of Health Care Professionals recently voted to approve a strike against Kaiser Permanente, CalMatters reported. If negotiations continue to stall between Kaiser Permanente and UNAC/UHCP, 24,000 workers at facilities in over a dozen California cities would strike, according to the report.
The union wants more efforts made to retain staff and address burnout among staff, according to the report. The union says 72% of its members experienced anxiety and burnout and around 45% reported insomnia and depression. About three quarters said hospital staffing was their primary concern, CalMatters reported.
Kaiser has urged employees to avoid a walk out.
"We ask that our employees reject a call to walk away from the patients who need them," Kaiser spokesperson Marc Brown told the Washington Post. "Our priority is to continue to provide our members with high-quality, safe care. In the event of any kind of work stoppage, our facilities will be staffed by our physicians along with trained and experienced managers and contingency staff."
The problems fueling the tensions in California aren't unique to the state. The Wyoming News Exchange reported Saturday that 12 hospitals in the state this week reported a critical staffing shortage to the federal government. Four hospitals in the state resorted to crisis standards of care due to shortages, according to the report.
As Insider previously reported, burnout, poor working conditions, and job dissatisfaction have enabled the ongoing nationwide shortage of healthcare workers. A recent study conducted by the University of Pennsylvania School of Nursing found that hospitals in New York City were understaffed as early as December 2019, months before the city became the US epicenter of the COVID-19 pandemic.
"The stress of working in a COVID ICU, and all the death that I've had to see, altogether, it has really set me back; I'm often very anxious, and angry," Sarah Chan, a registered nurse at St. Joseph's Hospital in New York, told Insider's Allana Akhtar in September. "So much death weighs heavy on me." 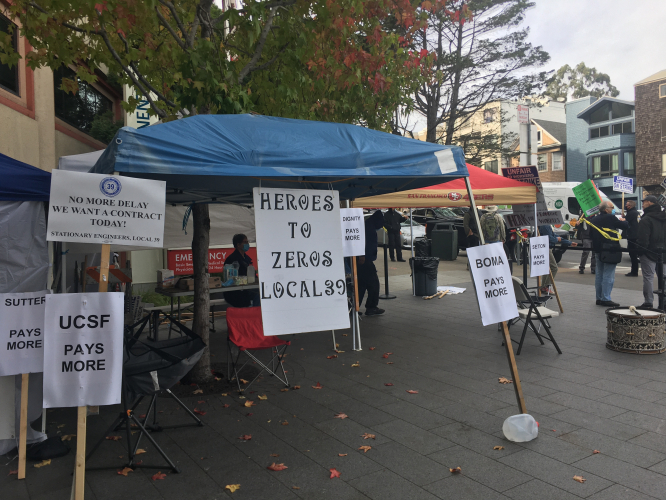 original image (4032x3024)
Striking IUOE Local 39 engineers and biomeds are angry that Kaiser is spending a fortune brining in scabs and trying to starve them out using the billions that they have been making.
END_OF_DOCUMENT_TOKEN_TO_BE_REPLACED
§Other Unions Joined In Solidarity
by Labor Video Project 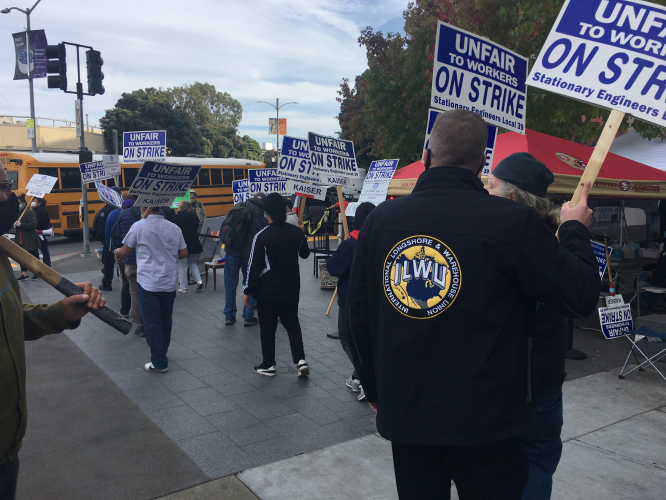 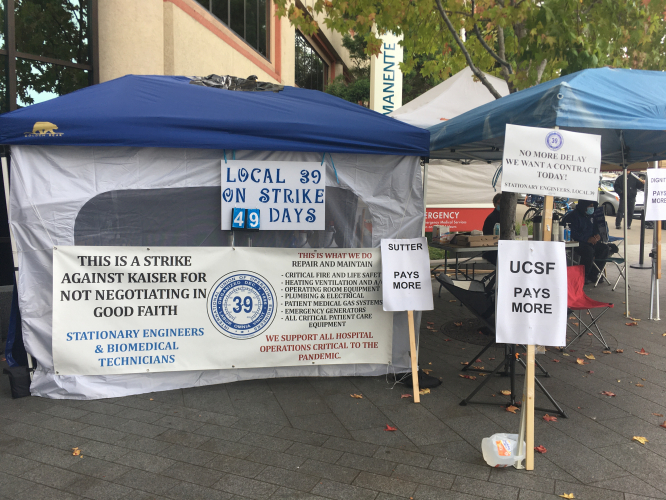 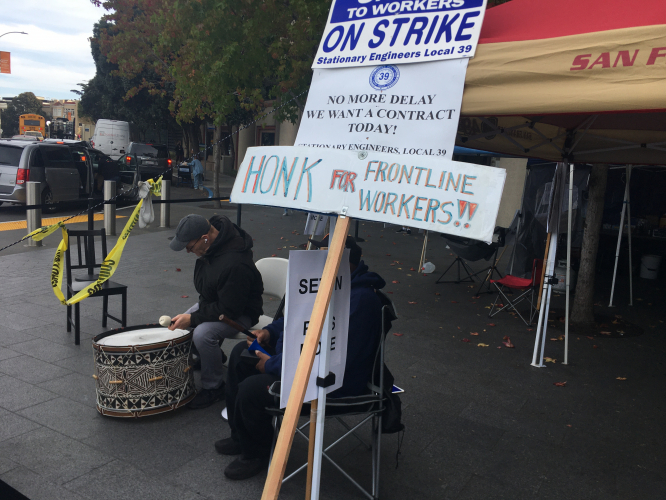 original image (4032x3024)
Frontline workers are angry about Kaiser bosses who make millions of dollars and are attacking their conditions and benefits.
END_OF_DOCUMENT_TOKEN_TO_BE_REPLACED
Add Your Comments
Support Independent Media
We are 100% volunteer and depend on your participation to sustain our efforts!