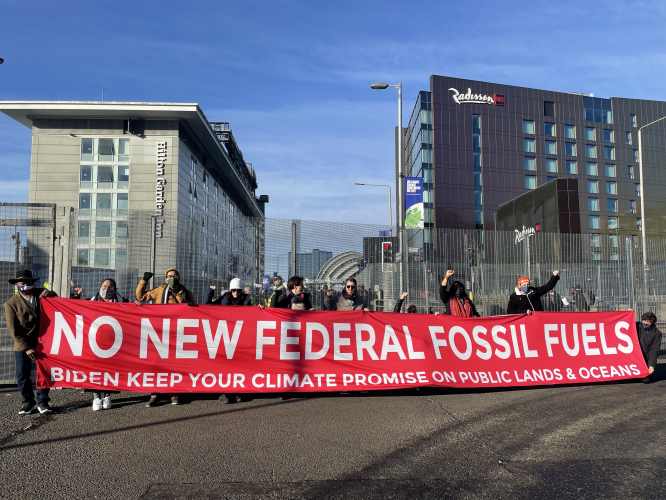 The protest preceded Interior Secretary Deb Haaland’s appearance at the summit. “No New Federal Fossil Fuels,” read the banner, which was unfurled just outside the COP26 venue.

Despite lawsuits, calls by millions of Americans to halt federal fossil fuel expansion, and the president’s own promise to tackle the climate crisis with the urgency it requires, the Biden administration is planning oil and gas lease sales across 80 million acres of the Gulf of Mexico and hundreds of thousands of acres of public lands. The Gulf sale is scheduled for Nov. 17, just days after the Glasgow climate talks.

“President Biden’s refusal to halt federal fossil fuel expansion is an inexcusable climate atrocity that makes a mockery of U.S. climate goals in Glasgow,” said Ben Goloff, a senior campaigner at the Center for Biological Diversity’s Climate Law Institute. “We're out of time. The president must use his executive authority to halt fossil fuel extraction on public lands, declare a climate emergency and make renewable energy available to everyone.”

Biden has abandoned campaign promises to end new federal oil and gas leasing and drilling. His administration has approved 3,091 new drilling permits on public lands at a rate of 332 per month, outpacing the Trump administration’s 300 permits per month in fiscal years 2018-2020. This leasing poses a disproportionate threat to Black, Indigenous and other people of color and low-income communities.

“In the Gulf we know that ‘where there’s drillin’, there’s gonna be spillin’,” said John Beard, founder and chief executive officer of the Port Arthur Community Action Network. “We came to Glasgow from the Gulf with one message for President Biden: Keep your word. It’s past time to stop the sacrifice zones, keep it in the ground and end new drilling on public lands and waters.”

In January 574 climate, conservation, Indigenous, religious and business groups sent then-President-elect Biden text for a proposed executive order that would use the full force of environmental laws to ban new fossil fuel leasing and permitting on federal public lands and waters.

Oil, gas and coal extraction uses mines, well pads, gas lines, roads and other infrastructure that destroys habitat for wildlife, including threatened and endangered species. Oil spills and other harms from offshore drilling have done immense damage to ocean wildlife and coastal communities. Fracking and mining also pollute watersheds and waterways that provide drinking water to millions of people.


https://biologicaldiversity.org/w/news/press-releases/anti-fossil-fuel-protest-meets-us-interior-secretary-at-cop26-2021-11-04/
END_OF_DOCUMENT_TOKEN_TO_BE_REPLACED
Related Categories: International | Santa Cruz Indymedia | U.S. | Environment & Forest Defense
Add Your Comments
Support Independent Media
We are 100% volunteer and depend on your participation to sustain our efforts!