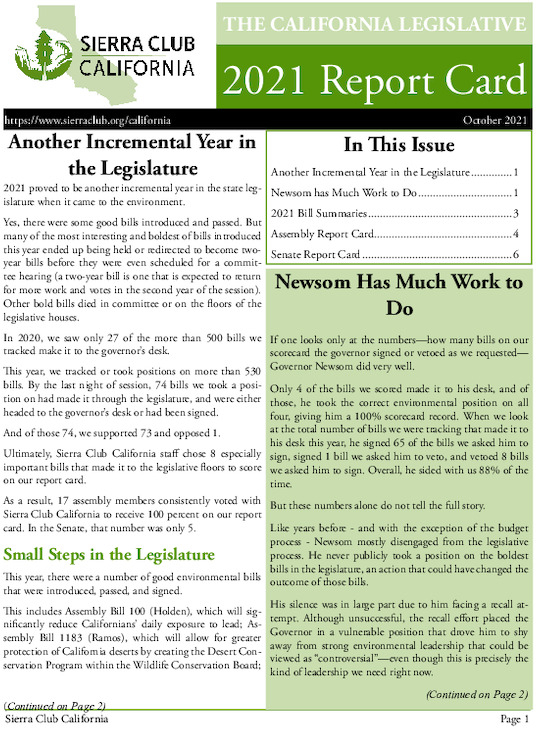 The theme of 2021 for environmental legislation was incrementalism. The most impactful, transformative bills that Sierra Club California supported, such as Senate Bill 467 - which would have phased out oil and gas extraction - and AB 377 - which would have established a framework to improve water quality in the state - failed to pass, along with many others.

The report card also includes an overview of Governor Newsom’s third year in office, a year in which he faced down a recall election.

“Although the Governor’s record on the report card is better this year than his last two years,” said Brandon Dawson, Director of Sierra Club California, “his administration continues to struggle when meeting the urgency that the climate crisis demands.” Dawson added, “we appreciate the governor’s recent actions on protecting public health and hope that we’ll see bold actions that stand up to polluting interests in 2022.”

To prepare the report card, Sierra Club California staff selected eight bills to score in each house. The bills chosen represent a diverse array of important environmental justice and conservation issues, including greenhouse gas emissions, oil and gas extraction, and water pollution. All of the bills were among those that Sierra Club California advocates and volunteers were actively engaged in supporting or opposing throughout the year.

The assembly members who earned perfect scores on the report card are:

The senators who earned perfect scores are:

Sierra Club California is the legislative and regulatory arm of Sierra Club’s 13 local chapters in California, representing nearly half a million members and supporters.