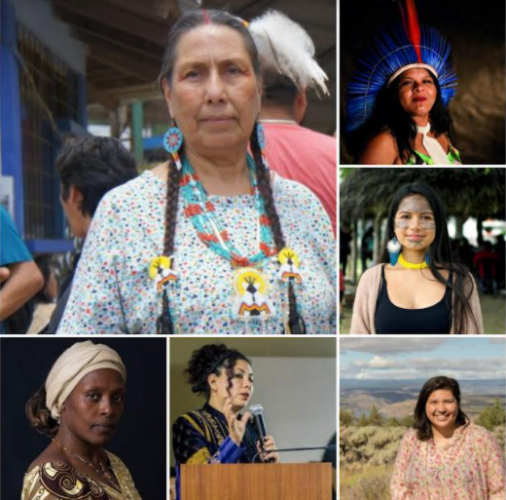 As COP 26 begins in Glasglow, WECAN said, "The detrimental global systems of domination, exploitation, capitalism, patriarchy, colonization and racism continue to be deadly to our world communities, harming first and worse, women, Indigenous peoples, communities of color, and low-income communities, We need our governments to fundamentally transform in order to truly function and care for people and planet— that means, uplifting and including Indigenous, Black, Brown, Global South, and frontline women leaders in decision making spaces; supporting frontline communities who are building climate solutions; and ending exploitative policies and practices that are deleterious to communities and the planet."

Casey Camp-Horinek of the Ponca Nation is a community leader, long-time Native rights activist, environmentalist and actress, and WECAN board member. As traditional Drumkeeper for the Ponca Pa-tha-ta, Woman’s Scalp Dance Society, Camp-Horinek helps maintain the cultural identity of the Ponca Nation of Oklahoma for herself, her family and her community. She has been at the forefront of grassroots community efforts to educate and empower both Native and non-Native community members on environmental and civil rights issues. She has raised her voice and taken action in countless forums across the world, and is a leader in the Rights of Nature movement.

Sônia Bone Guajajara is a Brazilian Indigenous leader. She is the Executive Coordinator for the Articulation of Indigenous Peoples of Brazil (APIB), and comes from the Araribóia Indigenous Land, of the Guajajara people. She graduated in Arts and Nursing, apart from being a specialist in Special Education by the State University of Maranhão. She was a candidate for Vice-President of Brazil in the 2018 Elections; coordinator of the organizations and articulations of the indigenous peoples of Maranhão (COAPIMA); and of the Coordination of the Indigenous Organizations of the Brazilian Amazon (COIAB). In 2015, she received the Order of Cultural Merit from the Federal Government, through the Ministry of Culture.

Helena Siren Gualinga is a youth social activist, of Kichwa-Indigenous and Swedish origin. She is known for her advocacy for climate and environmental justice. Helena is a WECAN Young Women Program Lead.

Neema Namadamu is a visionary peacemaker from Bukavu, South Kivu Province in Eastern Democratic Republic of Congo, where she advocates for peace, women’s rights, rights for persons with disabilities, rights for Indigenous pygmy peoples, and Rights of Nature. Neema is the WECAN Coordinator in the Democratic Republic of Congo. As WECAN DRC Coordinator, Neema leads workshops and trainings with local women to address deforestation, build women’s leadership, support Traditional Ecological Knowledge, and protect the rich ecosystems of the Itombwe rainforest. In June of 2012 Neema was selected as one of three World Pulse journalists for their annual Live Tour of the U.S., where she spoke before the U.S. Department of State, the Clinton Global Initiative, and was interviewed by CNN.

Carmen Capriles is a founding member of Reacción Climática and the WECAN Coordinator for Latin America. She is from La Paz, Bolivia and started Reacción Climática in 2010, as a volunteer organization which aims to raise awareness about the impacts of climate change on the Andean region. She has actively participated in different UN processes like the 2030 Agenda for Sustainable Development, and the Paris Agreement, with special emphasis on women's rights and gender equality - and most recently in the Escazú Agreement, advocating for Environmental Defenders. Carmen holds a degree from Bolivia as an Engineer in Agriculture, as well as a degree in Sustainable Rural Development from Egypt.

Osprey Orielle Lake is the Founder and Executive Director of the Women's Earth and Climate Action Network (WECAN) International. She works nationally and internationally with grassroots and Indigenous leaders, policy-makers and scientists to promote climate justice, resilient communities, and a just transition to a clean energy future. She serves on the Executive Committee for the Global Alliance for the Rights of Nature and heads-up WECAN’s advocacy work in areas such as Women for Forests, Rights of Nature. Fossil Fuel Divestment, and UN Forums. Osprey is the author of the award-winning book, Uprisings for the Earth: Reconnecting Culture with Nature.

Katherine Quaid is the Communications Coordinator for the Women’s Earth and Climate Action Network (WECAN). She was born and raised in rural central Oregon and is a citizen of the Confederated Tribes of Umatilla. Her dedication to climate justice is tied to the lands of her ancestors and the many communities nationally and around the world that are fighting for a healthy future. Katherine is passionate about sharing her voice for justice, and collaborating with frontline women across Turtle Island (USA) and globally in resistance movements and climate solutions.