by Censored News
The North Dakota Human Rights Film Festival will recognize the 5-year anniversary of the peaceful protest against the installation of the Dakota Access Pipeline in Standing Rock with the screening of the documentary feature film, END OF THE LINE: THE WOMEN OF STANDING ROCK. 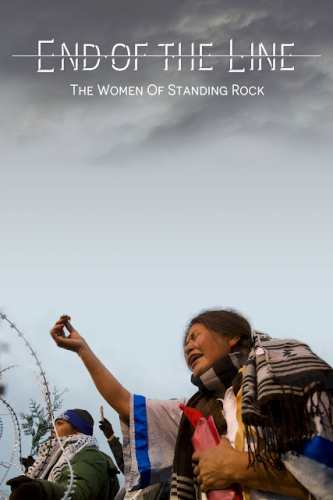 FARGO, North Dakota (Friday, October 29, 2021) – The 2021 North Dakota Human Rights Film Festival & Summit opens Tuesday, November 2 with afternoon and evening film screenings at the historic Fargo Theatre in Fargo, North Dakota. The event is free and to the public. Due to the ongoing pandemic, limited seating is provided for in-person events, and masks and vaccination requirements are in place. Tickets can be reserved at http://www.ndhrff.org.

At 1:30 p.m., 1971 critically acclaimed feature documentary THE MURDER OF FRED HAMPTON will screen. The film is about the short life and death of Fred Hampton, a young African-American civil rights activist in Chicago and leader of the Illinois Black Panther Party. During the film’s production, Hampton was fatally shot on December 4, 1969, in a pre-dawn raid at his apartment by the Chicago Police Department. The raid was revealed to have been organized in cooperation with the FBI. The film is screened in partnership with the North Dakota Film Society.

At 7 p.m., the festival will recognize the 5-year anniversary of the peaceful protest against the installation of the Dakota Access Pipeline in Standing Rock with the screening of the documentary feature film, END OF THE LINE: THE WOMEN OF STANDING ROCK.

The film features a group of indigenous women as they risk their lives to stop the Dakota Access oil pipeline construction. The installation desecrated their ancient burial and prayer sites and threatens their land, water, and very existence. In the process, they must face the personal costs of leadership, even as their own lives and identities are transformed by one of the great political and cultural events of the early 21st century. Placing their courage in true historic perspective, END OF THE LINE goes to the essence of this astonishing event – “the hearts of the women.”

Read more at Censored News
https://bsnorrell.blogspot.com/2021/10/north-dakota-human-rights-film-festival.html
END_OF_DOCUMENT_TOKEN_TO_BE_REPLACED
Add Your Comments
Support Independent Media
We are 100% volunteer and depend on your participation to sustain our efforts!