Live from the Frontlines: Our Democracy at Stake 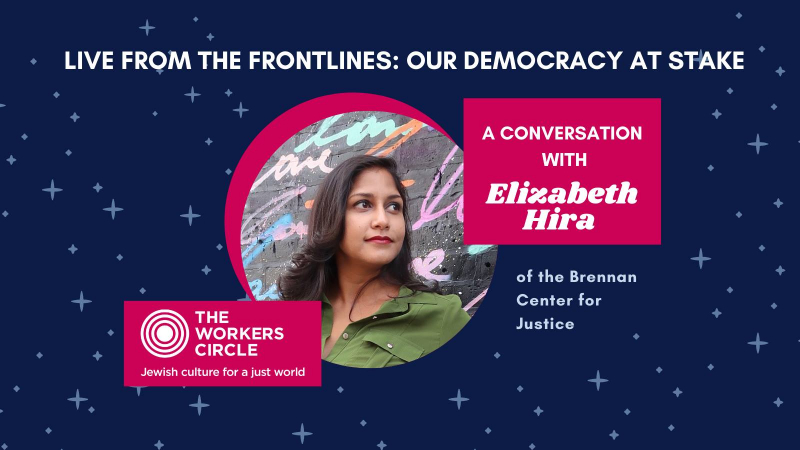 Import event into your personal calendar
Date:
Thursday, October 28, 2021
Time:
4:00 PM - 5:00 PM
Event Type:
Speaker
Organizer/Author:
Workers Circle, LWV, Brennan Ctr for Justice
Location Details:
Online event
Join us on Thursday, October 28, for a conversation with @ElizabethHira, Spitzer Fellow and Policy Counsel with the Brennan Center for Justice, and learn about some of the most critical threats to our democratic process.


The 2020 election had the highest turn out in modern history. But since then, hundreds of bills designed to restrict voting rights and even overturn election results have been introduced by state legislatures across the country; 33 have become law. These bills particularly target voters of color, low-income voters, and young voters. Congressional maps are being drawn right now through partisan, racial gerrymandering, that further suppress the voice of the people.

The Freedom to Vote Act which would stop voter suppression in its tracks is held hostage by the filibuster and the John Lewis Voting Rights Advancement Act faces the same uphill climb. Learn what’s at stake and how you can take action to protect and advance voting rights at this crucial hour.

Event by The Workers Circle and League of Women Voters of the U.S., and the Brennan Center for Justice

END_OF_DOCUMENT_TOKEN_TO_BE_REPLACED
Added to the calendar on Thu, Oct 28, 2021 2:48PM
Related Categories: U.S. | Government & Elections
Add Your Comments
Support Independent Media
We are 100% volunteer and depend on your participation to sustain our efforts!