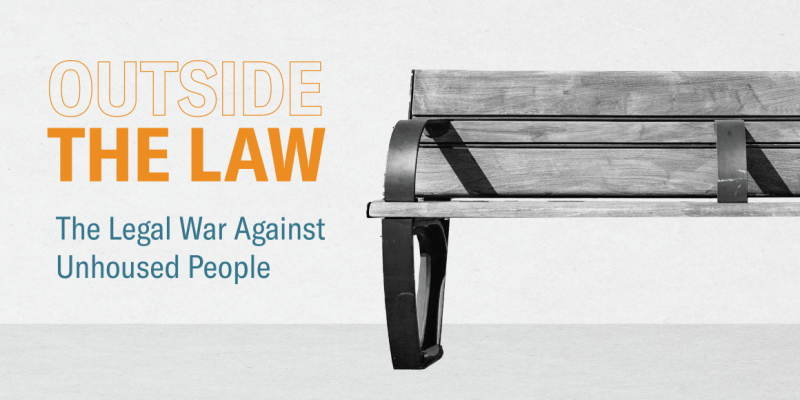 original image (1160x580)
The plight of people who are unhoused has reached horrific proportions in California, but instead of embarking on a resurgence of affordable housing, communities have instead instituted policies and regulations that target unhoused people by harassing, citing, segregating, banishing, and even imprisoning them.

The report spotlights the discriminatory tactics that cities throughout California have instituted to target unhoused people, ignoring the bedrock principle of equal treatment under the law. It calls upon communities to amend anti-discrimination laws to include unhoused people and acknowledge their fundamental human rights.

The report finds that:

* Discrimination against unhoused people is spreading and becoming more commonplace, especially due to local governments exploiting legal loopholes and sharing their tactics with one another.
* Municipalities are increasingly imposing fines and fees — even for sitting in a public park for only a few minutes — far beyond an unhoused person’s ability to pay.
* Cities are targeting not just unhoused people, but also the humanitarian organizations that provide critical aid such as food, water, clothing, and blankets.
* Unhoused people are being forcibly banished to remote areas, including harsh desert landscapes, outside city borders, and far from lifesaving resources such as water, food, and health care.

“I feel targeted by the sheriff deputies,” said Gary Foss, who was forced out of Lancaster and into the Mojave Desert. “We’re not bad people. Being homeless means you’re poor. It doesn’t mean that you’re out here because that’s what you want to do.”

The report notes that discrimination against unhoused people intersects with other forms of discrimination. A September 2020 report by the Lawyers’ Committee for Civil Rights of the San Francisco Bay Area shows that, across California, Black adults are far more likely than their white counterparts to be cited for local anti-homeless infractions.

The ordinances and regulations adopted by cities are often purposely vague as to allow for harassment. An example cited in the report is from the city of Novato where camping was banned in city parks, open spaces, within 50 feet of “critical infrastructure,” etc. When asked where unhoused people could exist, the city manager answered, “Anywhere it’s not illegal would be legal.”

Other California cities whose policies and practices against unhoused people are cited in the report include Chico, Laguna Beach, Lancaster, Los Angeles, San Diego, Santa Ana, and Santa Cruz.

“Our state is at an inflection point where years of disinvestment, as well as racialized wealth stratification and policing, are forming the perfect storm to perpetuate ongoing harm to our most vulnerable populations,” said Brandon Greene, racial and economic justice director at the ACLU NorCal. “The state must step in to ensure that animus towards the unhoused does not continue to be fodder for thinly veiled banishment from city centers.” 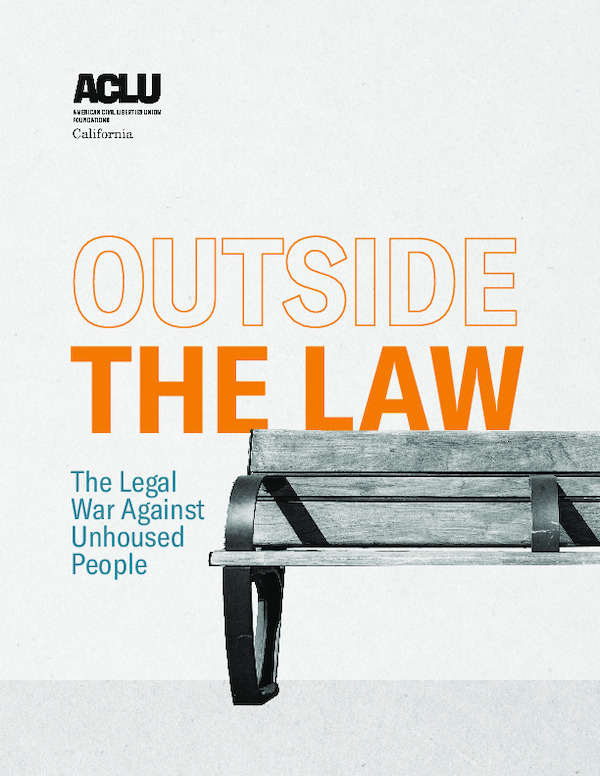 Download PDF (18.0MB)
https://www.aclunc.org/
Add Your Comments
Support Independent Media
We are 100% volunteer and depend on your participation to sustain our efforts!