Add an Event
Newswire
Calendar
Features
Home
Donate
From the Open-Publishing Calendar
From the Open-Publishing Newswire
Indybay Feature
Related Categories: East Bay | Labor & Workers
No Public Money For GAP/A's Billionaire Owner John Fisher' Stadium!
by Labor Video Project
Tuesday Oct 26th, 2021 2:34 PM
A rally was held at the Alameda County Board of Supervisor to oppose the use of $245 million in tax subsidies for the A's billionaire owner John Fisher for his stadium and infrastructure. Speakers from the ILWU and the community spoke out about the politicians who are voting to use tax funds for a development project benefiting a union busting billionaire who is also runs the KIPP and Rocket ship charters school chain. 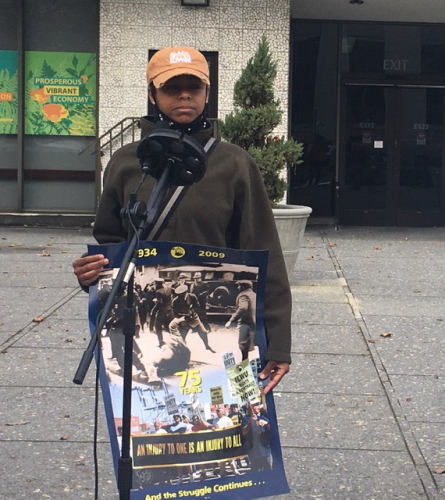 original image (570x640)
ILWU 10 members and community people rallied and spoke out on October 25, 2021 to oppose the Alameda Board of Supervisors proposed plan to give $345 million in public tax subsidies to the Oakland A's billionaire owner John Fisher for a new stadium on the Howard Terminal in the Port of Oakland.

The proposed stadium would destroy the working port of Oakland and threaten the jobs of over 80,000 maritime workers including ILWU Local 10, 34 and 75, SUP and MMP members.

Speakers also opposed the leadership of the Alameda Labor Council and Alameda County Building Trades who are supporting the tax subsidy for billionaire John Fisher which would destroy the working port of Oakland the the jobs of tens of thousands of unionized Black and Brown workers in the maritime trades.

Speakers also talked about the ocean shipping companies who are refusing to move ships to Oakland that are backlogged in Sacramento when the Port of Oakland of Oakland is available for shipping.

Speakers at the rally included ILWU Local 10 executive board member Janiero Baltrip, West Oakland community member Melody Davis who is also a retired Oakland Coliseum Unite HERE Local 2850 worker, and members of the United Front Committee For A Labor Party UFCLP which initiated the rally against the use of public funds for a new stadium on the port. 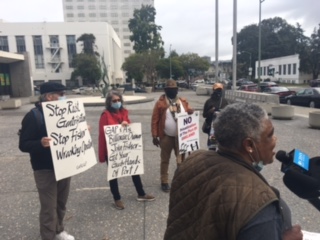 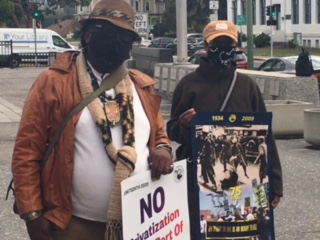 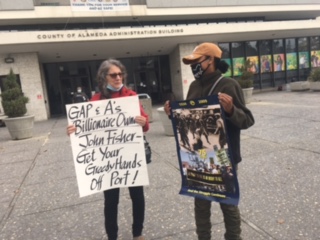 Lisa Milos on left who is a rank and file member of CWA UPTE at UCSF spoke out about the role of the Fisher family in trying to bust up the SFUSD public school Malcom X Academy to trying to take over rooms in the public school for the KIPP school which is run by the Fisher family.
https://youtu.be/dKnpBab1kd0
§Retired Cal-OSHA Inspector Charles Rachlis Opposed The Deal
by Labor Video Project
Tuesday Oct 26th, 2021 2:34 PM 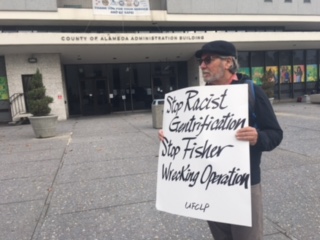 Retired Cal-OSHA inspector Charles Rachlis talked about the role of billionaire John Fisher and the capitalist Democratic Party politicians in destroying Oakland and the need for a labor party to fight for working people.
https://youtu.be/dKnpBab1kd0
Add Your Comments
Support Independent Media
We are 100% volunteer and depend on your participation to sustain our efforts!