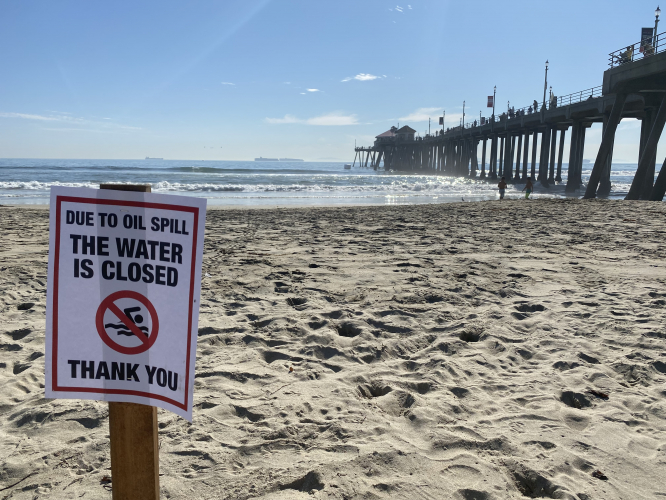 “This oil spill is a slap in the face for Californians, and it should be a wake-up call for the Biden administration,” said Emily Jeffers, a Center for Biological Diversity attorney who authored the petition. “Federal officials have the power and the duty to stop the oil industry from killing our birds, fouling our beaches and polluting our climate. The Biden administration needs to bring the hammer down on offshore drilling in California’s federal waters.”

Today’s petition comes after an undersea pipeline connected to drilling platforms in federal waters off Orange County ruptured on or around Oct. 1, spewing tens of thousands of gallons of oil into the ocean. The spill has fouled sensitive beaches and wetlands, forced the closure of fisheries, and harmed or killed dozens of fish and birds so far. The full damage to wildlife is likely to take months to become apparent.

The Bureau of Ocean Energy Management, an agency within the Department of the Interior, has the authority to suspend and ultimately cancel leases in federal waters if they cause serious harm to marine, coastal and human environments.

As the groups’ petition notes, activities under these leases meet these criteria by “exacerbating the climate crisis; causing oil spills that harm fisheries and coastal economies dependent on healthy wildlife and environments; producing dangerous air and water pollution; and furthering negative impacts to already imperiled wildlife and frontline communities.”

The Orange County incident follows a long series of spills on the California coast. The 2015 Plains Pipeline spill, for example, poured tens of thousands of gallons of oil into the Pacific and killed hundreds of animals, including dolphins and sea lions.

While today’s petition specifically asks for the suspension or cancellation of oil and gas leases in the Pacific, it recognizes that all fossil fuel extraction on federal public lands and waters must end. Ending drilling in federal waters off California “is an important part of accomplishing that larger plan,” the petition says.

“This should be the last time oil companies are allowed to spew crude into California’s beautiful coastal ecosystems,” Jeffers said. “Big Oil spills pretty much anywhere it’s allowed to drill, on land or in the ocean. Biden officials need to crack down hard to protect California and the whole country from this polluting, climate-damaging industry.” 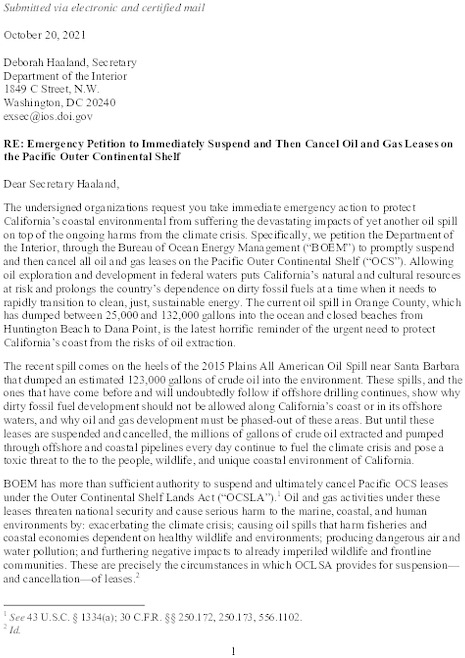 Download PDF (194.3KB)
https://biologicaldiversity.org/
Add Your Comments
Support Independent Media
We are 100% volunteer and depend on your participation to sustain our efforts!