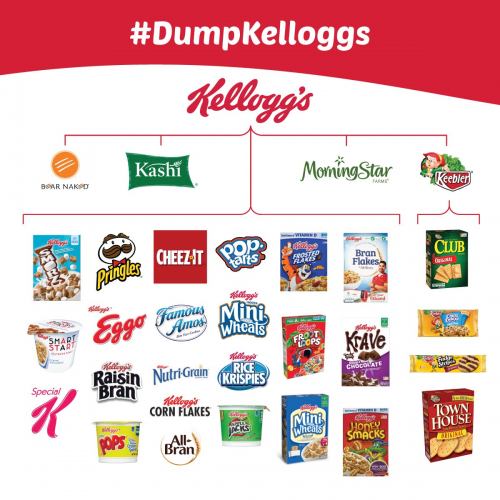 On October 5, 2021, a strike against the Kellogg Company began involving around 1,400 union workers (BCTGM) who are asking the public to support their strike by boycotting Kellogg’s products until the strike is over. The union workers are on strike because the union was opposed to the many changes being promoted by the Kellogg Company that are seriously detrimental to the well being of the workers, and their families, according to Wikipedia.

That’s right! Just try to imagine Tony the Tiger (That’s Great!!!), as a corporate stooge being used to increase the stock revenues for the likes of Trump campaign contributor, Alistair D. Hirst, a Senior Vice President, Global Supply Chain, of the Kellogg Company.

Imagine that… eating Kellogg breakfast cereals is actually supporting the Republicans, neo-Nazi Trump, and the fascist Republican National Committee. Surprise, surprise, the Kellogg Company failed to mention that on their boxes of cereal that is being promoted by “Tony the Tiger”, as you and your kids get a mouthful of White supremacist, neo-Nazi supporting sugar coated cereal that rots your teeth in the process.

Other consumer Kellogg products that may be on your table or in the cupboards at your home being used to enrich the stock portfolio of Alistair D. Hirst, a Senior Vice President, Global Supply Chain, of the Kellogg Company, who supports the fascist Trump and the Republican National Committee, includes Rice Krispies, Frosted Flakes, Fruit Loops, Honey Smacks, Raison Bran, Special K, and other fascist activity supporting products.

Just try to imagine what your friends and family would think of you if they knew that by eating your Kellogg Company breakfast cereals on a daily basis, that you are actually supporting the fascist Trump and the Republican National Committee’s agenda to steal your right to vote, as they continue to lie to the American public by claiming that the last election was stolen from Trump. Imagine that!

That’s right, you can support the striking workers and strike a blow against the Kellogg Company by dumping their products into your trash bin, and by proudly refusing to buy their products at your local grocery store.

Join the strike against the Kellogg Company, and deprive them of their stock investment revenues being used to support the fascist neo-Nazi Trump, the Republican National Committee, and the many Republican candidates supporting the fascist, White supremacist, neo-Nazi Trump activities.