Add an Event
Newswire
Calendar
Features
Home
Donate
From the Open-Publishing Calendar
From the Open-Publishing Newswire
Indybay Feature
Related Categories: Peninsula | Womyn
Resistance to SB 8: "We Out!"
by Judge Cordell on Texas Abortion Ban
Friday Oct 15th, 2021 5:01 PM
On the same day more than 650 other protests against Texas' anti-abortion raged across the nation, in Mountain View, California, 500 people heard LaDoris Hazzard Cordell compare SB 8 and the Fugitive Slave Act of 1850. "It is as striking as it is frightening," said the retired judge of the Superior Court of California and former Independent Police Auditor. The following is the text of her speech. 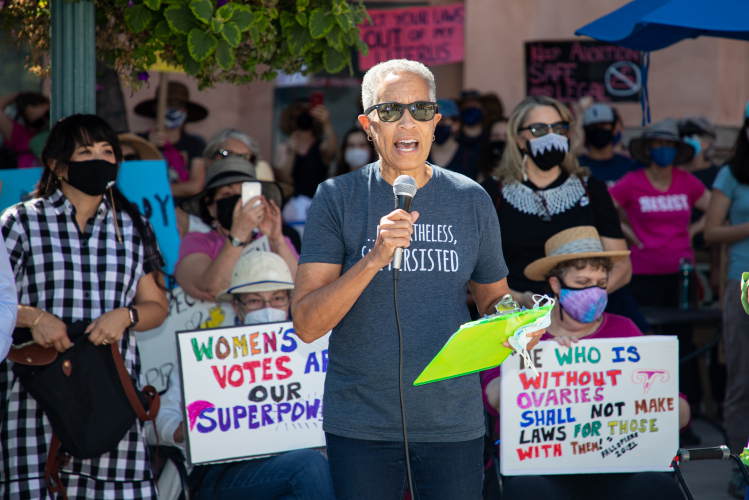 On May 19, 2021, Texas Governor Greg Abbott signed SB 8 into law, effectively banning abortion when an ultrasound can detect a “fetal heartbeat” any time after the first six weeks of pregnancy. Rather than relying on the state to enforce this law, the Texas legislature did an end-run around the constitutional mandate of Roe v. Wade by empowering private citizens to do the Lone Star State’s dirty work. Under SB 8, “Any person may bring a civil action against any person who knowingly engages in conduct that aids or abets the performance or inducement of an abortion[.]” And should that person prevail in the civil action, “the court shall award statutory damages in an amount of not less than $10,000,” plus attorney’s fees and costs of the litigation, all of which must be paid by the losing side. This means that the ride-share driver who transports a pregnant woman to a clinic, the person who generously pays for a Texas-prohibited abortion, the person who accompanies her pregnant friend to a medical facility, or the parents who arrange for their daughter’s Texas-forbidden abortion are all potential defendants in civil lawsuits that can be filed up to six years after the alleged aiding and abetting occurred.

The similarity between SB 8 and the Fugitive Slave Act of 1850 is as striking as it is frightening. Both weaponize private individuals to enforce flagrantly unconstitutional laws, and both impose punishment on those who fail to comply. Masterminded by Senators Henry Clay and Stephen Douglas, the Fugitive Slave Act was one of five bills in the Compromise of 1850, created to resolve disputes over slavery in the country’s new territories. The Act not only directed federal officials to seize black people simply on the claim that they were runaways but imposed a $1,000 fine for anyone who refused to make an arrest. The law also mandated that private citizens must aid and assist in the arrests of the presumed runaway slaves.

Additionally, anyone who “knowingly and willingly” obstructed or prevented anyone from arresting the fugitive faced a fine of $1,000 and six months’ imprisonment.

The first victim of the Fugitive Slave Act was James Hamlet, a free Black man who resided in Brooklyn with his wife and three children while working as a porter in Manhattan. He was arrested on Gustavas Brown’s claim that Hamlet had run away from Brown’s mother’s home in Baltimore. His protestation that he had been born a freed person notwithstanding, Hamlet was forcibly taken to the Baltimore Slave Market and sold. Associate Justice Sotomayor’s dissent in the SB 8 case in which she wrote that the law was “clearly unconstitutional under existing precedents” and “a breathtaking act of defiance — of the Constitution[,]” could just have easily applied to the Fugitive Slave Act of 1850.

But what happened to James Hamlet gives hope to all concerned about the protection of abortion rights. Hamlet’s freedom was purchased for $800 ($28,000 in today’s dollars) by his Brooklyn neighbors. His capture and subsequent community-sponsored emancipation became a rallying cry against the Fugitive Slave Act, inspiring abolitionists to call for residents in the Free States to ignore the law and to assist fugitives in their escapes to freedom.

Thereafter, Vermont enacted the Habeas Corpus Law establishing a judicial process to defend captured fugitives. Abolitionist Luther Lee, a Methodist pastor in Syracuse, New York defied the law by publicly writing in 1855, “I never would obey it. I had assisted thirty slaves to escape to Canada during the last month. If the authorities wanted anything of me, my residence was at 39 Onondaga Street. I would admit that and they could take me and lock me up in the Penitentiary on the hill[.]” That same year, the Wisconsin Supreme Court declared the Fugitive Slave Act unconstitutional, the only state court to do so, even though four years later, the U.S. Supreme Court would overturn it. Local juries refused to convict defendants accused of violating the Act. And, of course, there was fugitive Harriet Tubman who, with her famous battle cry, “We out!”,
courageously defied the law as she led the enslaved to freedom in the North.

Resistance to SB 8 has already begun. Twenty businesses and organizations, such as Bumble, Match Group and the Buckle Bunnies Fund, are creating relief funds to “aid and abet” women seeking abortion services outside of the state. Uber and Lyft will cover legal fees of their drivers sued under SB 8. Utilizing litigation, legislation, economic boycotts, and more, we can support the resistance. “We out!”
§March to the Plaza
by Judge Cordell on Texas Abortion Ban
Friday Oct 15th, 2021 5:01 PM 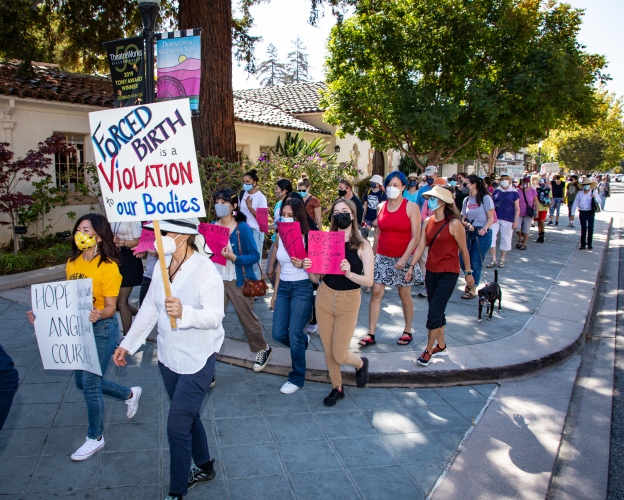 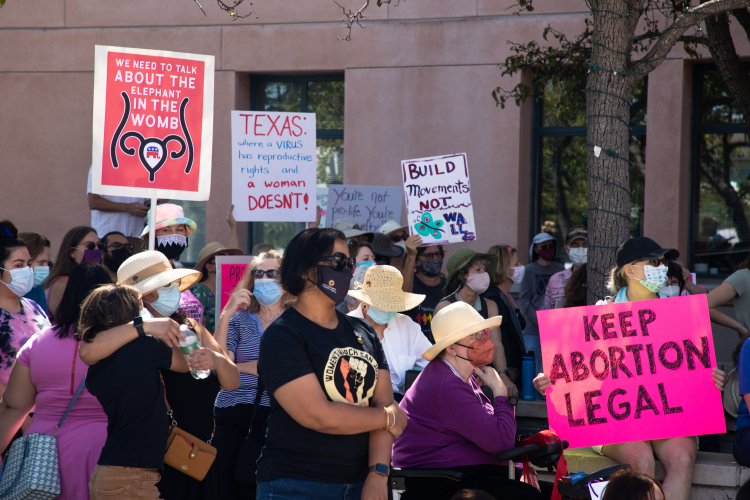 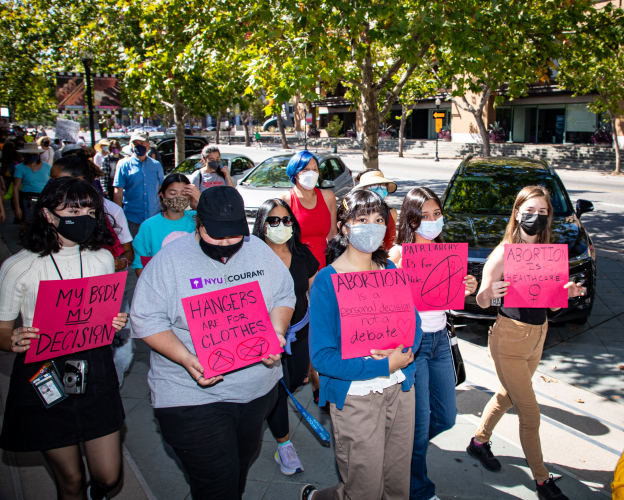 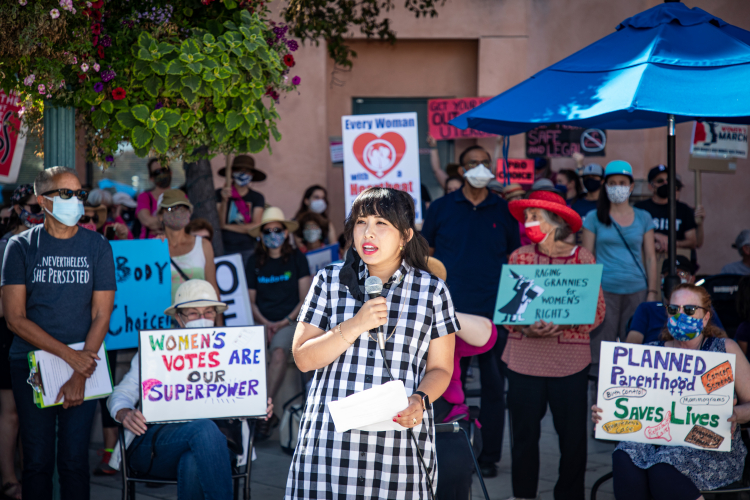 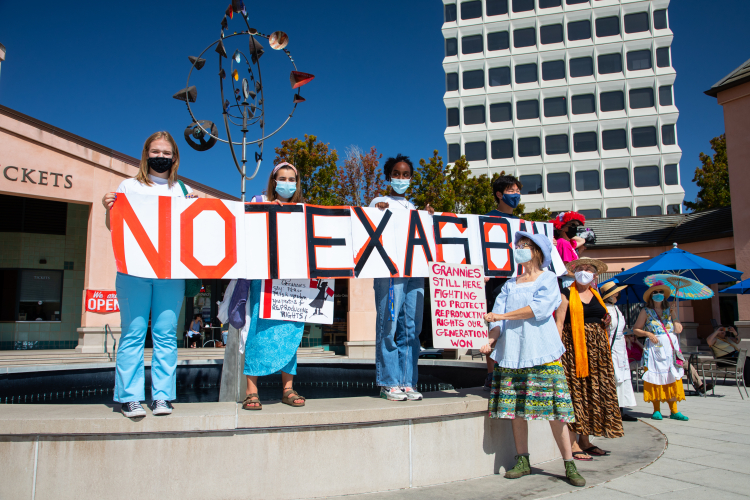 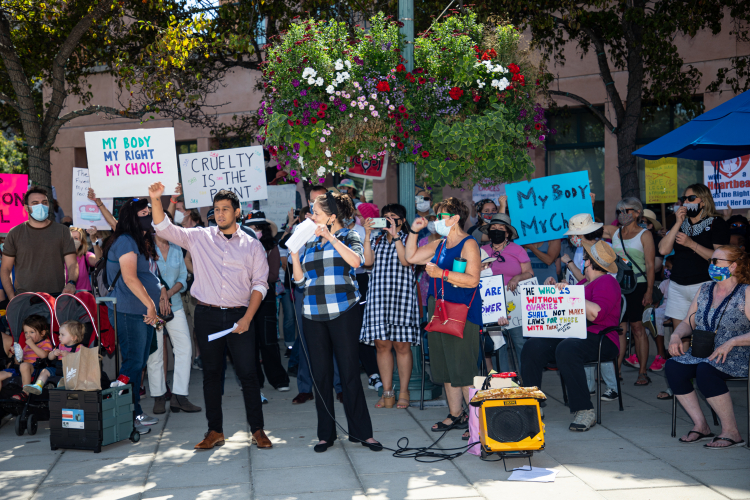 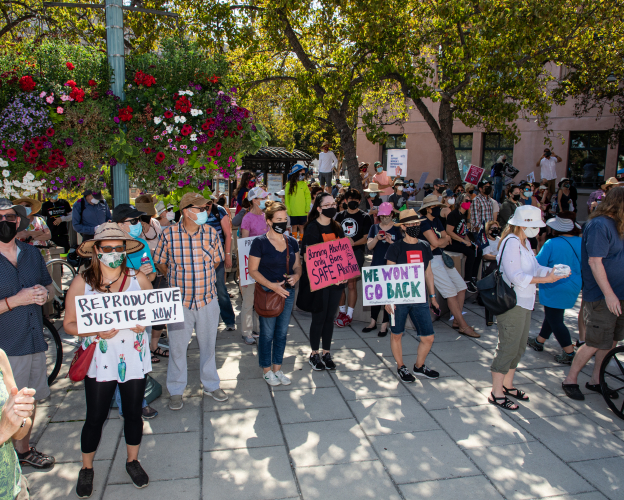 original image (5532x4426)
Add Your Comments
Support Independent Media
We are 100% volunteer and depend on your participation to sustain our efforts!