Add an Event
Newswire
Calendar
Features
Home
Donate
From the Open-Publishing Calendar
From the Open-Publishing Newswire
Indybay Feature
Related Categories: California | Labor & Workers
24,000 healthcare workers in California authorize strike action by 96 percent
by Max Jones (WSWS repost)
Tuesday Oct 12th, 2021 7:39 AM
The vote is a major development in the growing push by US workers for nationwide strike action against unbearable working hours, the erosion of wages and the continued spread of COVID-19 in workplaces. 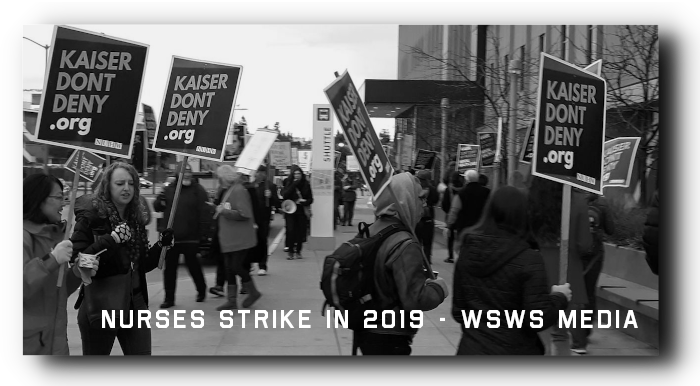 On Monday, 24,000 Kaiser Permanente nurses and health care workers in the United Nurses Associations of California/Union of Health Care Professionals (UNAC/UHCP) voted by 96 percent to authorize strike action. Voter turnout was high at 86 percent, an indication of the determination of health care professionals to fight against dangerously low staffing ratios.

The UNAC/UHCP membership includes a significant part of Kaiser’s Southern California workforce, including physician assistants, pharmacists, midwives, physical and occupational therapists, optometrists, as well as the vast majority of Kaiser’s registered nurses. With 24,000 workers, this would be the largest strike of the year in the United States and the largest health care strike in US history.

Workers are fighting against wage increases below the rate of inflation, chronic understaffing and the threat of a two-tier wage system, which Kaiser Permanente is keen on imposing, which many nurses fear will further exacerbate the staffing problem by amounting to significant pay cuts for future nurses. While COVID-19 cases have been slowly declining in California in recent weeks, the hospital system faces the likely prospect of being overwhelmed in a winter surge predicted by pandemic modeling and made all the more inevitable by the reopening of schools and the elimination of all remaining restrictions by Democratic Governor Gavin Newsom.

The vote took place October 1-10, after the UNAC/UHC and Kaiser Permanente failed to announce a new contract proposal before the expiration date of the former contracts last month. However, according to the terms agreed to by the unions, the earliest date the strike would occur is October 21. This reactionary pro-company provision, which keeps nurses on the job for three weeks with no contract, makes a mockery of the credo “no contract, no work” and serves no purpose other than allowing management ample time to hire strikebreakers, reducing the effectiveness of the strike.

Nevertheless, the strike vote at Kaiser is a major development in the growing push by workers for nationwide strike action in the United States against unbearable working hours, the erosion of wages by high inflation and against the continued spread of COVID-19 in workplaces. It follows a strike authorization vote by a similar margin by 60,000 TV and movie production workers, an overwhelming rejection by 10,000 John Deere workers of a concessions contract backed by the United Auto Workers, a nationwide strike of 1,400 Kellogg’s cereal workers and others. Thousands of nurses and health care workers are already on strike throughout the country, including 2,000 in Buffalo, New York and hundreds of Kaiser workers in Oregon.

This is part of a wave building across the world. More than 155,000 metalworkers are currently on strike in South Africa to demand wage increases above inflation. In Warsaw, Poland last month, between 30,000 and 40,000 doctors, nurses, caregivers, pharmacists, physiotherapists, hospital technicians, paramedics and many other professional groups held a massive protest in front of the Ministry of Health and the Polish Sejm (parliament) demanding better working conditions and wages for health care workers.

The World Socialist Web Site spoke to Kaiser Permanente workers in San Diego. One nurse said, “The strike is all about patient safety. We need a higher staffing-to-patient ratio for better patient care.” Another anonymous nurse explained, “Kaiser is putting profits over people. We were last year’s heroes, and now they want to divide us with a two-tier wage system!”

The contract being offered by Kaiser Permanente includes only a 1 percent annual wage increase for three years, while the current inflation rate is currently 5.25 percent, making these pay “raises” significant pay cuts. Another anonymous nurse told the WSWS, “A 1 percent raise is a slap in the face after saving so many lives last year, after we put ourselves and our families at risk.”

The same nurse added that the UNAC/UHC is also “demanding” wage increases below inflation, at 4 percent. “Kaiser is offering 1 percent; the union is offering 4 percent. We want 10 percent,” she said. She also expressed her support for other strikes taking place throughout the country, including by 700 nurses at Saint Vincent Hospital in Worcester, Massachusetts and the strike by Kellogg’s cereal workers.

Despite the high demand for nurses during the pandemic, a labor shortage which has been exacerbated by the exodus of nurses from the profession due to unbearable levels of stress, the ruling class is working hand in glove with the union bureaucracy to lower real wages, attempting to ram through contracts at one company after another with wage increases below inflation. In spite of disruptions to the global economy caused by the pandemic, US corporations continue to make billions of dollars in profit. Kaiser Permanente, for its part, reported a revenue increase of 5 percent to $46.87 billion in the first six months of the year. Net revenue went up a whopping 47 percent to $5 billion in the first six months of 2021. While Kaiser Permanente is technically a “non-profit,” the average salary of its executives is $230,162 a year, with some salaries as high as $652,000.

Since the start of the pandemic, the UNAC/UHCP has done nothing to defend workers against the intolerable conditions in the hospitals. Instead, they, along with other large unions such as the AFT, have sought to deflect workers’ anger into toothless appeals to the corporate political establishment by carrying out a public relations campaign to sue the federal Department of Labor and the Occupational Safety and Health Administration (OSHA) for failing to protect health care workers during the pandemic.

The UNAC/UHCP is deeply integrated organizationally and financially into Kaiser Permanente management. It is part of an organization called Labor Management Partnership (LMP), a formal corporatist partnership between the executives and the workers’ unions formed in the aftermath of a 1997 strike by 7,500 nurses in California. According to LMP’s website, this corrupt arrangement was originally proposed by the unions themselves:

The Labor Management Partnership started in 1997, emerging from mounting strife between Kaiser Permanente and its unions that threatened to derail the organization. Instead of continuing a traditional approach and launching a campaign against KP that ultimately could damage the organization—and the workers it employed—the Coalition of Kaiser Permanente Unions (link is external) approached KP leaders with an idea for how to do things differently.

LMP’s website could have been produced by any major management consulting firm and is mostly devoted to providing management with techniques to improve workers’ performance. One prominent video on the website provides tips to managers for how to improve attendance. This is what the official unions have functioned as for decades, little more than adjuncts of management and an industrial police force.

In order to win their demands, the struggles emerging in the working class around the world must be unified, through the development of the organized initiative of workers independent of the unions, which have enforced decades of attacks on working conditions by management. Kaiser workers must move now to form rank-and-file committees that are democratically controlled by the workers.

https://www.wsws.org/en/articles/2021/10/1...
Add Your Comments
Support Independent Media
We are 100% volunteer and depend on your participation to sustain our efforts!