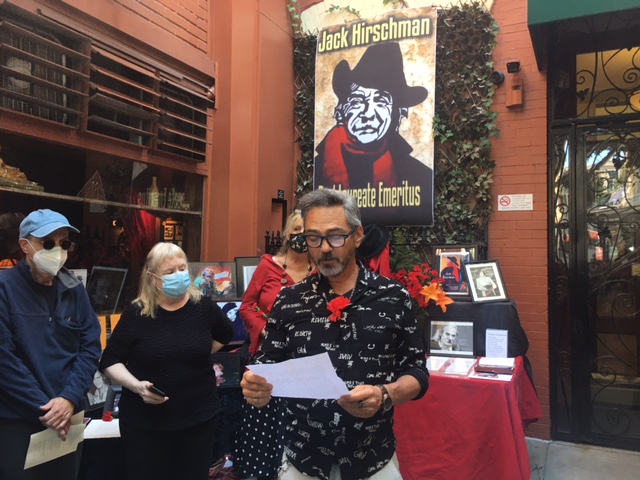 On Words As Weapons! Memorial For Labor Troubadoure Jack Hirschman

WorkWeek covers the October 2, 2021 memorials that were held for labor poet and troubadour Jack Hirschman. They were held for him in North Beach where he and his partner and poet Agneta Falk lived. He passed away on August 22, 2021.

It started at Specs bar, moved to Vesuvio’s and ended up at Washington Park. The North Beach Brass band accompanied the memorial march through North Beach to the park where poets and his friends spoke out.

We also will hear poetry about the struggle of working people that Hirschman read and other poets read at the memorial.
Hirschmann supported the Spanish dockers who faced deregulation and the loss of 7,000 jobs. This reading took place on March 10, 2017 at the Spanish consulate in San Francisco.

Jack Hirschman also supported the international struggle of the Liverpool dockworkers who refused to cross picket lines and were fired. They build an International campaign and action took place at the port of Oakland when the ship Neptune Jade tried to unload cargo from Liverpool. Jack in in poem talked about the need for international solidarity if workers are going to be successful in their struggles.

His reading took place at the British consulate in San Francisco where a solidarity rally was held.
Additional media: