Add an Event
Newswire
Calendar
Features
Home
Donate
From the Open-Publishing Calendar
From the Open-Publishing Newswire
Indybay Feature
Related Categories: Palestine | International | Education & Student Activism | Global Justice & Anti-Capitalism
Zionism, Israel & The Firing Of UK University of Bristol Sociologist David Miller
by Labor Video Project
Wednesday Oct 6th, 2021 5:44 PM
David Miller a sociologist at the University of Bristol in the UK raised issues about the role of Israel and the Zionists and he was targeted by Zionists for removal. Under their new policy criticism of Israel and Zionism is "anti-semitic". He was fired on October 1, 2021 by the university for supposed anti-semitism. 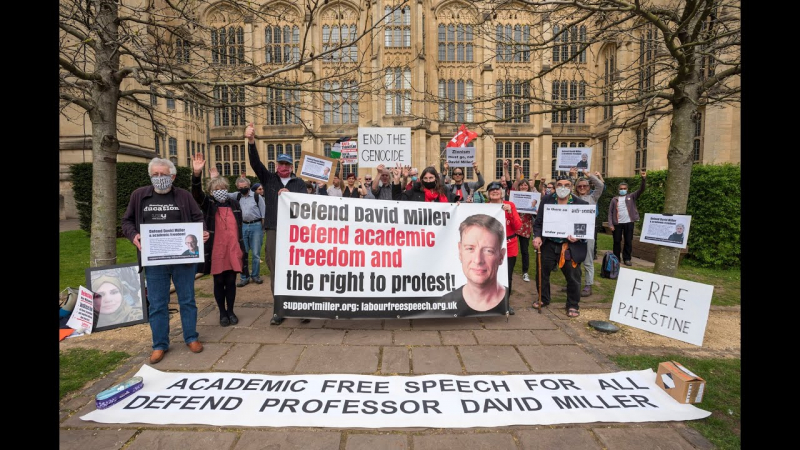 original image (1280x720)
The attacks on critics of Israel including university faculty members is escalating and at the University of Bristol, sociologist David Miller was terminated on October 1, 2021 by the University for alleged anti-semitism.

WorkWeek's Steve Zeltzer interviews Miller about how he began to investigate the role of Israel and Zionism and how there has been an organized effort to shutdown criticism of Israel.

He also discusses the role of Israel in the UK and how they have organized a campaign to suspend former Labour Party leader Jeremy Corbyn and also film maker Ken Loach from the Labour Party.

We must resist Israel’s war on British universities
https://electronicintifada.net/content/we-must-resist-israels-war-british-universities/32391

200 academics back lecturer under attack from 'proud Zionists'
https://www.middleeastmonitor.com/20210303-200-academics.../
Artists stand with Ken Loach and against McCarthyism
https://artistsforpalestine.org.uk/.../stand-with-ken.../...

Labour Against The Witch Hunt
https://fb.watch/2m2dqbwt3Y/

WorkWeek
https://soundcloud.com/workweek-radio
Production of Labor Video Project
http://www.labormedia.net
https://youtu.be/I8MWxfTYE04
Add Your Comments
Support Independent Media
We are 100% volunteer and depend on your participation to sustain our efforts!