Add an Event
Newswire
Calendar
Features
Home
Donate
From the Open-Publishing Calendar
From the Open-Publishing Newswire
Indybay Feature
Related Categories: U.S. | Media Activism & Independent Media
Whistleblower Warns Facebook a Threat to Children and Democracy
by In SF Bay Area there will be Facebook Protest
Tuesday Oct 5th, 2021 10:18 PM
Article by Brett Wilkins on Common Dreams.There will be a caravan protest at the home of Mark Zuckerberg near Facebook on Oct 17. Details are posted on indybay calendar. Photo by Leon Kunstenaar/Pro Bono Photo of protest at FB Headquarters in 2020. 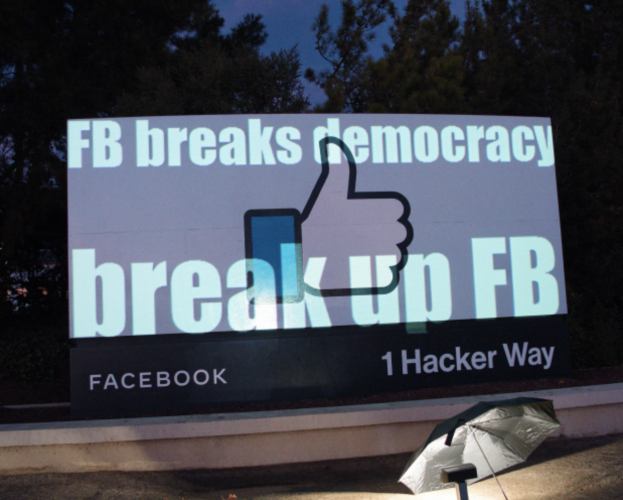 original image (1238x992)
Two days after a bombshell "60 Minutes" interview in which she accused Facebook of knowingly failing to stop the spread of dangerous lies and hateful content, whistleblower Frances Haugen testified Tuesday before U.S. senators, imploring Congress to hold the company and its CEO accountable for the many harms they cause.

"In some cases, this dangerous online talk has led to actual violence that harms and even kills people."
Haugen—a former Facebook product manager—told the senators she went to work at the social media giant because she believed in its "potential to bring out the best in us."

"But I'm here today because I believe Facebook's products harm children, stoke division, and weaken our democracy," she said during her opening testimony. "The company's leadership knows how to make Facebook and Instagram safer, but won't make the necessary changes because they have put their astronomical profits before people."

"The documents I have provided to Congress prove that Facebook has repeatedly misled the public about what its own research reveals about the safety of children, the efficacy of its artificial intelligence systems, and its role in spreading divisive and extreme messages," she continued. "I came forward because I believe that every human being deserves the dignity of truth."

"In some cases, this dangerous online talk has led to actual violence that harms and even kills people," she said.

"It also means that millions of small businesses weren't able to reach potential customers, and countless photos of new babies weren't joyously celebrated by family and friends around the world," she added. "I believe in the potential of Facebook. We can have social media we enjoy that connects us without tearing apart our democracy, putting our children in danger, and sowing ethnic violence around the world. We can do better."

Doing better will require Congress to act, because Facebook "won't solve this crisis without your help," Haugen told the senators, echoing experts and activists who continue to call for breaking up tech giants, banning the surveillance capitalist business model, and protecting rights and democracy online.

She added that "there is nobody currently holding Zuckerberg accountable but himself," referring to Facebook co-founder and CEO Mark Zuckerberg.

Sen. Richard Blumenthal (D-Conn.)—chair of the Senate Consumer Protection, Product Safety, and Data Security Subcommittee—called on Zuckerberg to testify before the panel.

"Mark Zuckerberg ought to be looking at himself in the mirror today and yet rather than taking responsibility, and showing leadership, Mr. Zuckerberg is going sailing," he said.

"Big Tech now faces a Big Tobacco, jaw-dropping moment of truth. It is documented proof that Facebook knows its products can be addictive and toxic to children," Blumenthal continued.

"The damage to self-interest and self-worth inflicted by Facebook today will haunt a generation," he added. "Feelings of inadequacy and insecurity, rejection, and self-hatred will impact this generation for years to come. Our children are the ones who are victims."

Reprinted under Creative Commons license
https://www.commondreams.org/news/2021/10/...
Add Your Comments
Support Independent Media
We are 100% volunteer and depend on your participation to sustain our efforts!