Add an Event
Newswire
Calendar
Features
Home
Donate
From the Open-Publishing Calendar
From the Open-Publishing Newswire
Indybay Feature
Related Categories: East Bay | Police State & Prisons
Blazing sideshows of Oakland and the Bay Area
by Lynda Carson (newzland2 [at] gmail.com)
Sunday Oct 3rd, 2021 12:57 AM
Oakland Sideshow: The attacks on the organizers of sideshows have become so extreme locally, that in San Jose recently, it has been reported that a judge ordered the promoters of sideshows to stop organizing them on social media, and violators could face a $1,000 fine and six months in jail if caught! 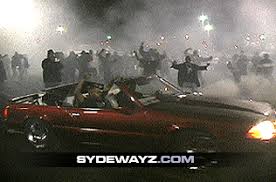 Blazing sideshows of Oakland and the Bay Area

Oakland - Oakland is the home of blazing sideshows with souped up cars, the smell of burning rubber, and the sound of tires screeching against asphalt on a lonely night, as excited crowds, and car enthusiasts have become part of the normal landscape in Oakland despite the crackdown by the pigs, and greedy corrupt politicians in the pocket of big business.

Last night around 2:00AM in East Oakland, not far off in the distance I could hear the sound of screeching tires burning rubber at one of the local nearby blazing sideshows entertaining an excited crowd with fast souped up cars, and dazzling displays of cars spinning around doing donuts.

I could not help but smile as it reminded me of the good old days when as teenagers we used to have so much fun with our cars. We would hangout listening to some sweet rock and roll on a summers eve while washing and and waxing our cars till they shined like twinkling glistening stars speeding through the night, cruising down the old farm roads outside of Chicago as fast as we dared to go.

I can recall the excitement as a teenager in the suburbs of Chicago, as we used to hang out in the local High School parking lot on a cold winter night. A parking lot that was full of ice and snow, as we were drunk and spinning around and doing donuts in our old Mustangs, 57 Chevy’s, Novas, Camaros, GTO’s, Challengers, Chargers, T-Birds, Trans Ams, Corvettes, and other types of cars that we loved to speed around in during some carefree days of youth.

It seemed like a lot of harmless fun as we sped around in our cars seeing how many times we could spin the cars around, making as many donuts as was possible on the ice and snow, in the large empty parking lot of the local High School on a cold Saturday night.

Seems strange that the sound of a loud car speeding through the night reminds me of my childhood, when we used to sit on the front porch of a relatives farmhouse late at night, as we tried to guess what kind of car is speeding by in the dark. By the sound of it’s engines, and mufflers, we would wonder if that was a Ford or a Chevy, that just sped by down the old farm road around 80 miles per hour as we counted the cars passing by at night, after an afternoon of playing in the hayloft of the barn.

Back in those days there were plenty of entertaining exciting car chase films to watch in the theaters such as Vanishing Point, or the film Bullitt, the French Connection, plus other car chase films that we could try to imitate or mimic. We used to have so much fun as we drove around and showed off our beautiful cars, and sped around to see how fast we could go, or to see how many donuts we could make as we spun around in circles on the ice covered parking lots in our cars, as a way to beat the cold wintertime blues out of our system on a freezing cold night.

Rarely were we hassled by the pigs in those days for having gatherings to show off what we could do with our cars, and the politicians knew better than to attack the local youth with their orchestrated smear campaigns in the news that were meant to terrorize the local youth with arrests, and seizure of our cars.

Sad to say, times have changed for the worse. The attacks on the organizers of sideshows have become so extreme locally, that in San Jose recently, it has been reported that a judge ordered the promoters of sideshows to stop organizing them on social media, and violators could face a $1,000 fine and six months in jail if caught. It appears to be just another fascist reason to lock up the local youth of color who are car enthusiasts, while robbing them of their money, and hi-jacking their cars in the process. What a world… and I feel sorry for the poor youth under attack for one reason or another by the power of the insatiable fascist state.

Meanwhile, the dreaded GOP is moving with lightening speed across the nation to deprive the population of their right to vote, as they are hi-jacking a women’s right to chose, while the covid-19 delta virus has spiraled out of control as it has killed off over 650,000 loved ones across the nation, while the world seems to be falling apart from the ravages of climate change, and political upheavals.

>>>>>>>>
Add Your Comments
Support Independent Media
We are 100% volunteer and depend on your participation to sustain our efforts!