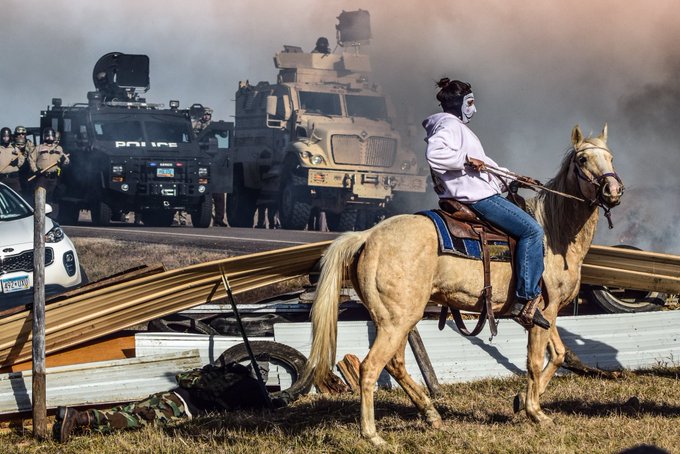 NEW YORK (October 1, 2021) -- The private security firm TigerSwan received over $17 million from Dakota Access LLC for its work related to the construction of the Dakota Access Pipeline, recent court filings and documents produced in response to a judicial order in the ongoing litigation Thunderhawk v. County of Morton reveal.

Plaintiffs have alleged in that suit that TigerSwan acted in close cooperation with law enforcement to enforce discriminatory police practices.

After the court ordered TigerSwan earlier this month to fully disclose its work for Dakota Access LLC—what TigerSwan actually did to be paid $17 million—TigerSwan informed the court that it no longer had this evidence: just four days before its deadline for disclosing the evidence in question, TigerSwan claims it returned it to Energy Transfer Partners (the parent company of Dakota Access LLC) and purged its remaining copies.
TigerSwan now says that it did so pursuant to an “understanding” that its former CEO had with Energy Transfer Partners that “‘TigerSwan would, as much as possible, consider any information about [their] work in North Dakota or for that matter any of [their] work with ETP as confidential and proprietary,’ and would do ‘everything [TigerSwan] could do to prevent disclosure of anything [they] may have on hand relating to ETP and the work we did for them.’”

The plaintiffs bringing this case have asked the federal court overseeing discovery to order TigerSwan to procure this evidence from Energy Transfer by any means or to sanction TigerSwan for its actions.

“There is a degree of trust inherent in the civil justice system,” Professor Smith-Drelich, counsel for the plaintiffs notes. “We trust that defendants aren’t going to just destroy evidence that is bad for them. I hope we are still able to fully recover this evidence from TigerSwan—but they undoubtedly breached that trust here.”

“There’s no question that a party to litigation has a duty to preserve all of their relevant documents once a case is filed, even more so when they are under deadline to produce discovery,” attorney Amy Knight added.

The Thunderhawk case arises out of the #NoDAPL movement at Standing Rock in 2016-2017, in which tens of thousands of Water Protectors gathered on the northern border of the Standing Rock Reservation to support the Standing Rock Sioux Tribe’s resistance to the Dakota Access Pipeline.

The lawsuit centers around law enforcement’s discriminatory closure of a nine-mile stretch of the region’s primary public right of way, with the assistance of TigerSwan, which effectively severed the Tribe and its supporters from Bismarck, the state capital and the location of the nearest airport, shopping, and major population center, as well as from the nearest major hospital.

The Thunderhawk plaintiffs are represented by Professor Noah Smith-Drelich (Assistant Professor of Law at Chicago-Kent), attorney Amy Knight, and Professor Bernard E. Harcourt of Columbia Law School. Prior to joining Chicago-Kent, Smith-Drelich was a Lecturer in Law at Columbia Law School, and before that the ACLU's Staff Attorney for their North Dakota, South Dakota, and Wyoming affiliates. As a private attorney, Knight has worked extensively on death penalty cases as well as juvenile life-without-parole cases, and has represented clients who have suffered serious violations of their rights in civil lawsuits. Harcourt is the founding director of the Columbia Center for Contemporary Critical Thought, which actively engages in pro bono public-interest representation.

The plaintiffs in this case, Cissy Thunderhawk, Wašté Win Young, the Reverend John Floberg, and José Zhagñay are, respectively, a small-business owner, a former Historic Preservation Officer of the Standing Rock Sioux Tribe, Standing Rock’s Episcopalian Minister, and a school volunteer. The plaintiffs, and the class they seek to represent, allege violations of their constitutional rights. Through the suit, the plaintiffs hope to recover damages for the substantial harms inflicted on the community and movement by this unnecessary and overbroad road closure.
The litigation forms part of the Practical Engagements initiative of the Columbia Center for Contemporary Critical Thought. In 2018, the Center organized a seminar on Standing Rock that explored many of the legal issues and civil rights violations associated with the Standing Rock protest movement.

https://bsnorrell.blogspot.com/2021/10/new...
Add Your Comments
Support Independent Media
We are 100% volunteer and depend on your participation to sustain our efforts!