Add an Event
Newswire
Calendar
Features
Home
Donate
From the Open-Publishing Calendar
From the Open-Publishing Newswire
Indybay Feature
Related Categories: U.S. | Environment & Forest Defense | Media Activism & Independent Media | Police State & Prisons | Racial Justice
Paiute Shoshone Myron Dewey: Going Home, A Final Salute
by Brenda Norrell
Saturday Oct 2nd, 2021 11:10 AM
As Standing Rock Water Protectors escort Paiute Shoshone Myron Dewey filmmaker and journalist to his final resting place today on in his homeland, we echo Myron's words from his livestream a week ago, his final voice opposing the Navy's bombing range, lithium mining, and the greed and genocide that runs as a scar through his ancestral homeland in what is known as Nevada. 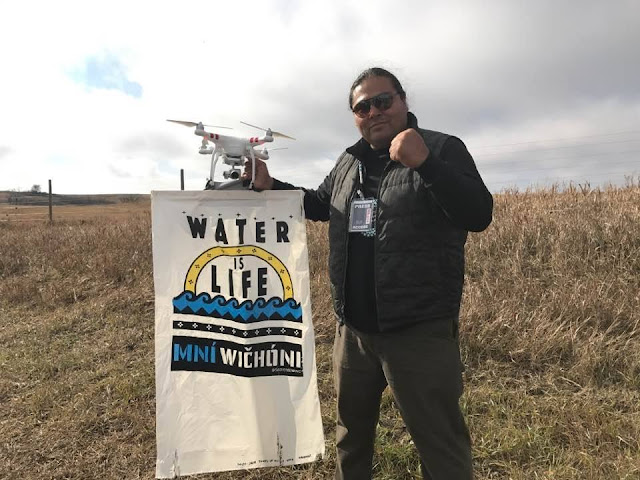 Paiute Shoshone filmmaker and journalist Myron Dewey was killed in a car crash on Sunday morning after broadcasting live from the Navy bombing range at Yomba, Nevada.

As Standing Rock Water Protectors escort Myron to his final resting place today, we echo Myron's words from his livestream a week ago, his final voice opposing the Navy's bombing range, lithium mining, and the genocide that runs as a scar through his homeland.

Myron, Walker River Paiute and founder of Digital Smoke Signals, provided drone surveillance and media coverage during the resistance to the Dakota Access Pipeline by Water Protectors in Standing Rock, North Dakota in 2016 and 2017. Myron is co-director of the film 'Awake.'

Broadcasting live on Saturday, the day before he was killed in a car collision in rural Nye County, Myron described the military industrial complex that he grew up with in the Nevada desert.

With a message to his future grandchildren, he said, "I am a witness, this is what we survived."

Myron was broadcasting live video from the desert around the Fallon Range Training Complex, the Navy's bombing range, in Yomba, east of Reno.

The bombing range is used by the Navy Seals for bombing, ground maneuvers and electronic warfare, according to the U.S. Navy.

Although expansion is now being pushed, Native people are opposed to the massive bombing range expansion. Mryon and Native leaders in the region have been speaking out and battling the expansion.

Returning to his childhood homeland at Yomba on Saturday, Myron said live on social media during the video, "This is what we grew up around, the military industrial complex."

Myron said the military was flying over sacred places. Describing the destruction of the sacred here, he said both mining and the bombing ranges have caused desecration of sacred places.

Myron said when he hears, "Thank you for your service," another image comes to mind: "Killing, rape, genocide."

"I am a survivor of a mass genocide across the United States."

Pointing out that genocide is being carried out around the world, he said, "In Nevada it is still fresh."

Myron said this video is to warn his grandchildren of this corporate greed, and the greed that demands power and military force.

Speaking on climate change, he said there were not enough pine nuts to feed the people during ceremony this year.

Myron also speaks in the video of the green-washing and the lithium mining now targeting sacred ancestral land at Thacker Pass in northern Nevada. He speaks of the need to protect and defend the land and water.

"Take a breath," he said, "Take a moment and appreciate what you have." 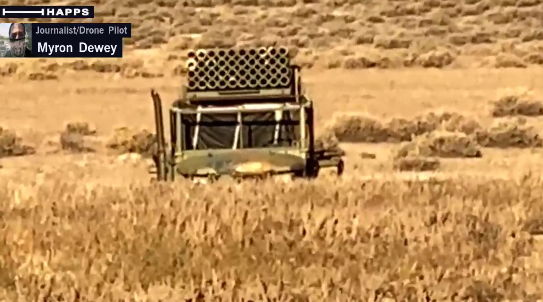 An Avenger missile launcher livestreamed in Myron Dewey's broadcast on Saturday, before he was killed in a car crash on Sunday. This Avenger in the Nevada desert range of his homeland, comes after another Avenger was positioned in the militarized police force, during the resistance to the Dakota Access Pipeline, at Standing Rock five years ago.
https://bsnorrell.blogspot.com/2021/09/pai...
Add Your Comments
Support Independent Media
We are 100% volunteer and depend on your participation to sustain our efforts!