Add an Event
Newswire
Calendar
Features
Home
Donate
From the Open-Publishing Calendar
From the Open-Publishing Newswire
Indybay Feature
Related Categories: California | Environment & Forest Defense
PG&E Wildfire Plan Roundly Criticized, Does Not Get CPUC Approval
by Reclaim Our Power Utility Justice Campaign
Saturday Sep 25th, 2021 5:39 AM
Press Release from Reclaim Our Power Utility Justice Campaign. This is the largest coalition of organizations fighting for a transformation of California's energy system. Made up of environmental justice organizations, energy organizations, fire survivors, labor organizations and community groups, the campaign represents over 75 groups from across the state and many thousands of Californians. 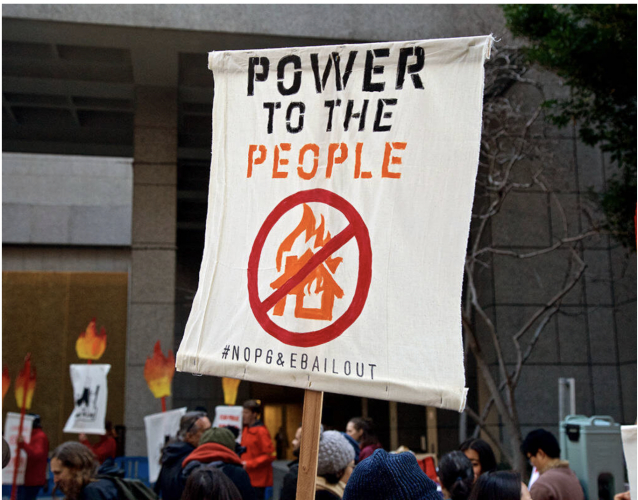 Fire survivors, people with disabilities, people from low income and Black, Indigenous, and other communities of color cited deadly PG&E caused wildfires, persistent power outages, and looming exorbitant rate increases while raising the demands of the Reclaim Our Power Utility Justice Campaign to reject the PG&E’s inadequate, incomplete and dangerous plans, and move towards revoking the investor owned utility’s license to operate in California.

“The need to take the energy system out of the hands of Wall St and put it into the hands of the people has never been clearer. Today’s action shows that the CPUC is capable of seeing through PG&E’s lies, holding them accountable, and moving us toward the safe, reliable, affordable worker and community controlled energy system we all need. Now, we demand the CPUC to finish the job of getting us out of danger and cancel PG&E.”
Mari Rose Taruc, Coordinator of the Reclaim Our Power Utility Justice Campaign.

“If it wasn’t so terrifying, it would be embarrassing. PG&E submitted a plan that had 29 major deficiencies and expected to waltz out with approval for another year of mismanagement, deception, and shareholder profits taken directly from our communities. Not ratifying the Wildfire Mitigation Plan is a good first step- now we need the CPUC to reject the plan outright, and end the tyranny of PG&E over Californians' lives.”
Jessica Tovar from the Local Clean Energy Alliance.

Commissioner Genevieve Shiroma initiated the rescheduling of the vote on the WMP, going against recommendations from the new Office of Energy Infrastructure Safety (Energy Safety), which falls under Governor Gavin Newsom’s Department of Natural Resources. Shiroma cited the numerous failures identified by Energy Safety in PG&E’s plan. In addition, several Commissioners questioned openly why PG&E had not included anything in the plans about the massive power line undergrounding project they made public immediately following the utility’s ignition of the Dixie Fire, now the largest single source fire in state history.

“What today’s decision shows is that PG&E does not share the priorities of our communities. They’d rather double the salaries of their millionaire executives and boast in press releases about a far-fetched boondoggle putting power lines underground instead of investing in true, proven, community based safety techniques. We know what our communities need- and we know it isn’t PG&E. “
Antonio Diaz, People Organized to Defend Environmental and Economic Rights

https://reclaimourpowerca.org
Add Your Comments
Support Independent Media
We are 100% volunteer and depend on your participation to sustain our efforts!