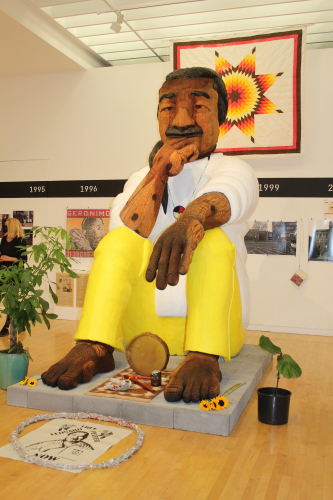 The 12-foot tall sculpture sits at the center of the exhibition, anchoring a narrative of Leonard Peltier’s 45-year long incarceration. For the first time, the sculpture is being presented alongside photographs, letters, artwork, posters and ephemera from Rigo’s archive.

According to Rigo 23, who grew up in Portugal before coming to the United States, the exhibition “aims to communicate, to share, to create a unique experience for the viewer, as any art exhibit does.”

“But personally, this exhibition is a special marker: 25 years ago I had my first solo exhibition at the Richmond Art Center, and that exhibit centered on the plight of Black Panther leader Geronimo ji Jaga, who was then imprisoned at Mule Creek State Prison. Geronimo would be released the following year, 1997, and awarded a settlement for wrongful imprisonment,” said Rigo 23. “Both the FBI and the LAPD compensated him for plotting against his freedom.”

“The current exhibition, Time and Again, focuses on the plight of American Indian leader Leonard Peltier, whom many institutions, individuals and governments around the World also believe to have been wrongfully convicted. Most notably, the lead prosecutor on the case has called for his release since 2017. The purpose of this exhibition clearly includes calling attention to Leonard Peltier's continued imprisonment,” he stated.

This exhibit centers on "Leonard Peltier - Waiting", a mixed media 12 X 6 X 9 foot statue that is based on a painted self-portrait that Peltier painted from prison. The statue has been exhibited in four other venues, in Washington, DC; Los Angeles and San Francisco, according to Rigo 23.

“But I've mounted several other exhibitions which centered on Peltier's art and plight, the first of which was at the De Young Museum in San Francisco, in 1999. That exhibit was titled "Tate Wikikuwa Museum" and it travelled the world, including London, UK; Santiago, Chile; Rio de Janeiro, Brazil; Lisbon, Portugal; Syracuse, and Niagara Falls in New York,” he stated.

On October 10 at 6 p.m. there will be a gathering for Indigenous Peoples' Day held at the Richmond Art Center.

Rigo 23 explained how growing up in Portugal at the time of the Portuguese Revolution in 1974 had a big influence on the current path he has taken.

“In my youth Portugal went through a profound transition, from a colonial quasi fascist regime, to a progressive one focused on International Solidarity with Movements for Self- Determination,” he stated. “It was in that light that I first became aware of the brutality of the Reservations System in the United States and the relationship between America's Manifest Destiny and the Nazi regime's expansionist ethos in Europe. Leonard Peltier, unwittingly, became a symbol of systemic and collective oppression, much in the same vein as Nelson Mandela became a symbol for European Colonialism and institutionalized racism in Africa.”

To create the huge sculpture of Peltier, he had to learn how to do it as he went along creating it.

“That was on the job training,” he said. “I mean, I had some experience gained with ‘Victory Stand,’ the sculptural tribute to Tommie Smith and John Carlos at San José State University, which I completed in 2005. But still this project was much more DYI. Entirely funded by myself and friends and supporters, it was built over a two year period as I was able to gather the necessary materials and secure a place to built it in. I started by carving the statue's feet out of two redwood logs, and built it up from there.”

The current exhibition also includes materials such as original sketches for the banner “It’s 1999, Why is Leonard Peltier Still in Prison?” mounted outside the Berkeley Art Museum; photographs from the Tate Wikikuwa Museum installed at the deYoung Museum that same year; brochure and zine from theTate Wikikuwa Museum at the Warehouse Gallery in Syracuse University where the Leonard Peltier sculpture premiered, in 2011.

On September 12, a special dedication for the exhibit was held that coincided with Leonard Peltier's 77th Birthday.

“It was a very moving gathering that brought together relatives of Peltier, including his daughter Kathy, with supporters, some of whom have been advocating for his behalf for as long as he has been imprisoned - 45 years,” he stated. “A remarkable moment was when a few sundancers wove a sage crown which they placed on the Statue's head. The sage had come from Crow Dog's Paradise Sundance grounds in Rosebud, South Dakota, and Crow Dog Jr was in attendance.”

“After those gathered sang Happy Birthday to Leonard, a group of singers - men and women - gathered and sang the AIM song acapella in his honor. That was the highlight of the day,” he concluded.

Francisco Dominguez, a Chicano/Tarahumara photo journalist and artist, whose photo of John Trudell at Mission High School in 1997 is displayed at the exhibition, said the exhibition is significant “because of how long Peltier has been unjustly imprisoned and how the powers that be have made an example of him as an activist and somebody who is standing up for the people. I encourage all people who care about human rights and civil rights to attend, as we live in a time where the county is turning towards the right.”

Chicano Artist Juan R. Fuentes also has two works that are displayed in the exhibit.

“First, in 1992, I produced the print 500 years of Native Resistance to commemorate the landing of Columbus and I included a large face of Leonard Peltier and the wording, Freedom for Leonard Peltier. Second, in 1990 I created the poster, International Day to Resist the Imprisonment of Leonard Peltier, June 26, 1990,” he explained.

“It has been some time that has elapsed since we have had an exhibition that focuses on Leonard Peltier in the Bay Area. The fact that Rigo has been able to assemble so many levels of interaction with support for Leonard over the years is significant and a testament to the ongoing struggle for liberation for Leonard and his people,” said Fuentes.

In the late 80s, Fuentes was a member of the Native American Defense Committee, anchored by then warrior Sydney Welsh. As an artist, he supported the struggle and his biggest contribution was through his prints and posters.

“My role as a Chicano artist has always been connected to our peoples struggles and I feel that anything that my work lends to the advancement of our struggle is my responsibility as an artist of color,” said Fuentes. “What I noticed at the exhibition were the young and old were there to support Leonard Peltier.”

“it is very encouraging to see the next generation of activists gives us all a great sense that the struggle will continue. Leonard's imprisonment has been so long that people tend to forget and this exhibition will ensure that Leonard’s needs are still addressed and he will be exposed to a new wave of supporters. It was an honor to be in this exhibit and to have the chance to meet Leonard's family,” Fuentes stated.

Calixto Robles, a printmaker/painter and Zapotec Indian from Oaxaca, Mexico whose art is also on display at the show, said the current show is a must-see because it’s about a man who has been in jail for more than 40 years.

“He is accused of a crime he didn’t commit — just for defending his land and his people. This show is to call the attention of the whole world to demand his freedom,” Robles noted.

He emphasized that art is “an important tool to denounce injustice and to inform people of what is happening in the struggle of the 99% population of this world. I think when people get united for a right cause, it’s impossible to stop it.”

The sculpture (California redwood, foam, plywood, and metal) is based on a small hand-painted self portrait Leonard Peltier created in prison. The statue’s 9 x 6 foot base replicates the dimensions of a traditional prison cell. Each time the work is shown, the exhibition incorporates selections from the growing collection of photographs of supporters standing in solidarity on the statue’s feet.

Completed in 2016 and first shown at the Katzen Art Center at the American University, Washington D.C., the artwork was almost immediately censored, removed from display, and subsequently withheld from the artist for one year.

The removal of the statue was in response to a bomb threat and to the University’s president receiving complaints from the FBI Agents Association – events which happened on the same day. Since its return to the artist, it has been exhibited at the Main Museum in Los Angeles (2018), SOMArts (2019) and most recently atop the roof of the San Francisco Institute of Art overlooking Alcatraz Island (2020).

The statue’s feet, which are detachable, have taken their own journey, traveling to significant sites of Native Resistance across the U.S. including Standing Rock, Alcatraz Island, Wounded Knee, Crow Dog’s Paradise, and the Pine Ridge Indian Reservation. Supporters have been invited to stand on the feet as an expression of solidarity – and be photographed. In summer 2021, Richmond Art Center also welcomed members of the community to do so.

About the Artist: Rigo 23 has exhibited his work internationally for over 30 years placing murals, paintings, sculptures, and tile work in public situations where viewers are encouraged to examine their relationship to their community, their role as unwitting advocates of public policy, and their place on a planet occupied by many other living things. His projects have included inter-communal collaborations with Native Tribes in North and South America; long-term partnerships with political prisoners; and alliances with underrepresented and disenfranchised individuals and communities. @rigo23studio @peltierstatue #freeleonardpeltier

About Richmond Art Center: Richmond Art Center has been sharing art and creating with the community since 1936. Our programs encompass classes, exhibitions and events at our facility in downtown Richmond, as well as off-site activities that bring free, high-quality art making experiences to WCCUSD schools and community partners. richmondartcenter.org 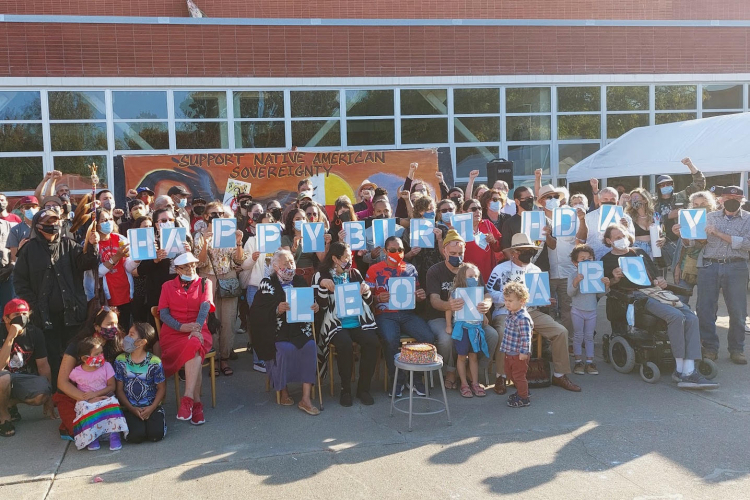 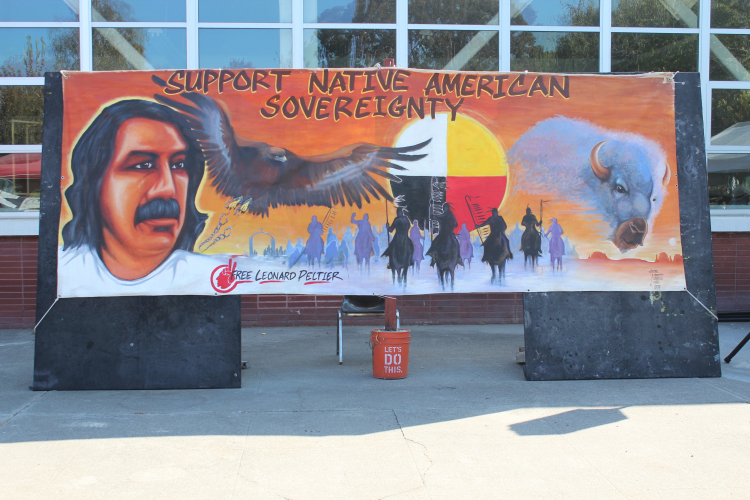 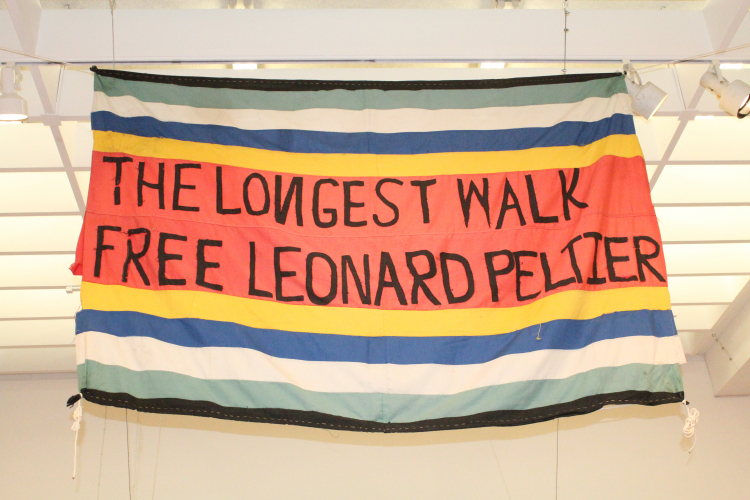 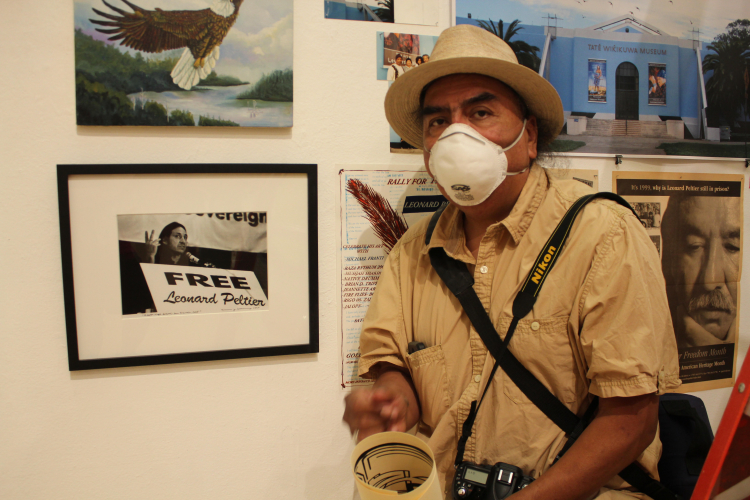 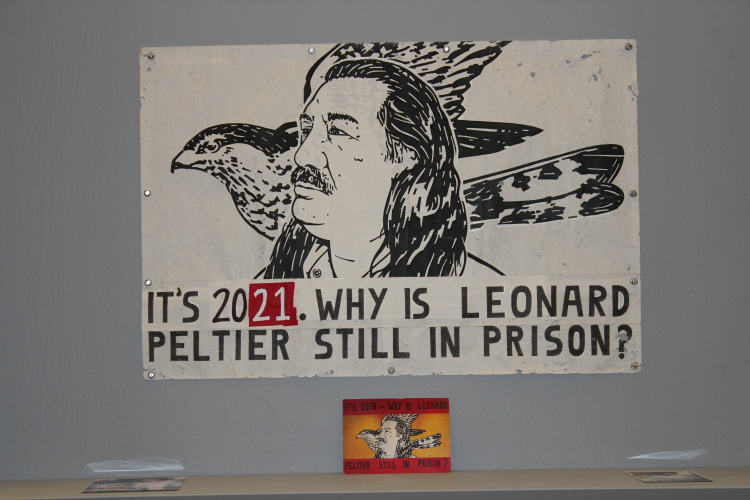 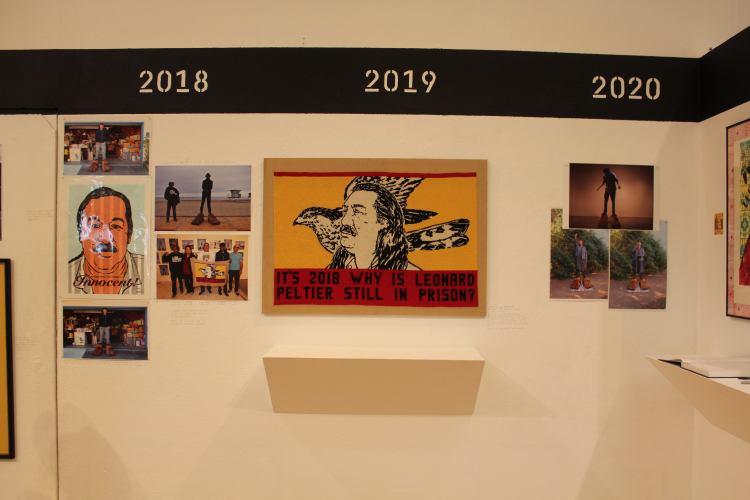 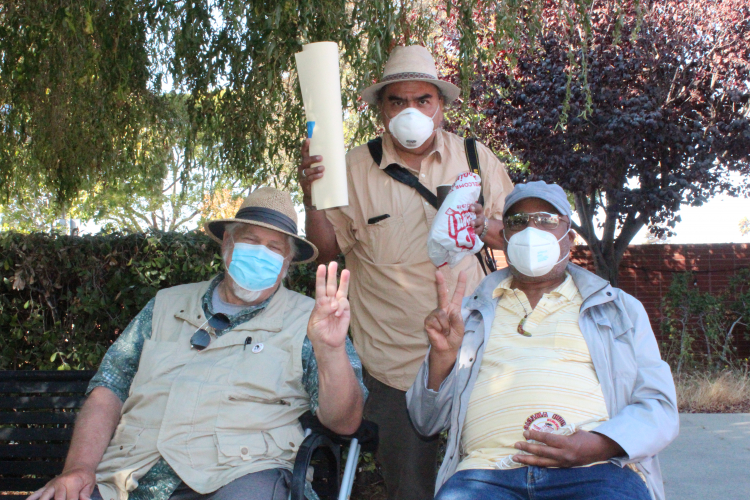 original image (5184x3456)
Three artists displaying their works at the show include (center) Francisco Dominguez and (right) Emory Douglas.
Add Your Comments
Support Independent Media
We are 100% volunteer and depend on your participation to sustain our efforts!