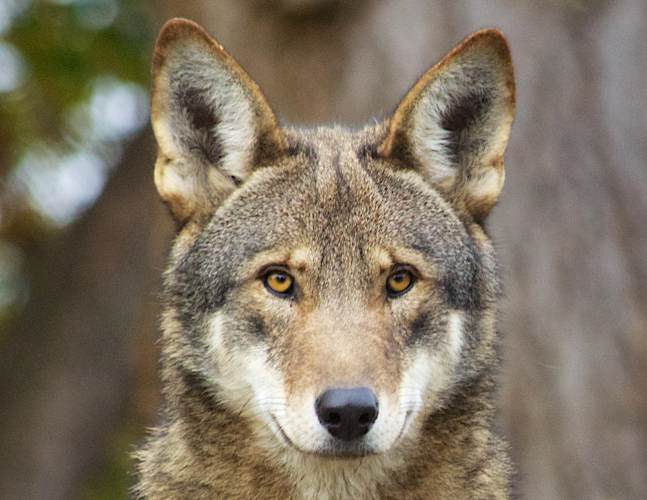 original image (2340x1806)
ASHEVILLE, N.C., September 23, 2021 — A new study published in the journal Biological Conservation finds that poaching of red wolves is driven by a small minority of individuals who live in eastern North Carolina’s Red Wolf Recovery Area. The study indicates that the species enjoys robust local support among the general population, but a small group of local poachers has been effective in driving the species to the brink of extinction.

“Our results support the hypothesis that a small group of people willing to kill red wolves illegally is driving the species to extinction,” said Suzanne Agan, a primary author of the study. “We don’t yet understand why red wolf poaching has been a problem for so long, and solutions to it have been ineffective. But knowing they have public support, management can make more effective decisions that enforce the Endangered Species Act in a way that expresses the value these animals have on the landscape.”

While most people in the Recovery Area like red wolves and support their recovery, according to the study, 11% of self-identified male hunters surveyed in the area reported they would kill any wolf they encountered on their own.

When the study was finished earlier this year, note the authors, only seven red wolves remained in the Recovery Area, down from a high of 130 wolves in 2006. The primary driver of this population collapse was poaching, vehicle strikes and other human-caused killing. Hunting season is identified as the time of year when opportunistic poaching is most likely to occur.

The U.S. Fish and Wildlife Service should increase law-enforcement interventions to prosecute and prevent poaching, the study recommends. Also recommended are outreach to the local public to promote acceptance of red wolves and encourage communication about poaching problems and direct interventions with male hunters who are inclined to poach.

“That a few poachers can thwart the will of the majority should be a serious concern to conservationists, law enforcement and scientists,” said Adrian Treves, the other primary author of the study. “We can no longer assume that public support is sufficient for red wolf conservation. Now we also need strict law enforcement for this population and for other controversial but essential species. And for the greater community of hunters to stop protecting these wildlife crimes.”

The study was authored by Suzanne Agan and Lisabeth Willey of Antioch University and Adrian Treves of the University of Wisconsin-Madison.

Once common throughout the southeastern United States, red wolves have been reduced to a single wild population of fewer than 10 known individuals in eastern North Carolina.

In 2015 the Service stopped taking actions necessary to conserve the remaining wild population, such as releasing captive-bred wolves and sterilization of coyotes to prevent hybrid animals from damaging the gene pool. The agency also took no action to prosecute poachers who picked off the remaining wolves one by one. As a result, the population crashed to the brink of extinction, where it remains today.