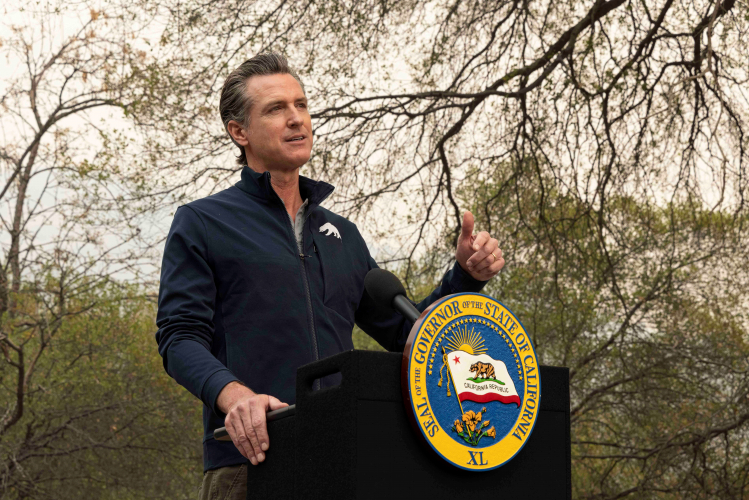 original image (8192x5464)
Sacramento, CA -- Against a backdrop of trees at the site of the KNP Complex Fire in Sequoia National Park as wildfires rage across California, Governor Gavin Newsom signed the California Comeback Plan’s $15 billion climate package — the largest of its kind in the country.

Although climate justice and environmental advocates described the package as “impressive,” Food and Water Watch said the package lacks the “ultimate fire prevention method”: halting new permits for the drilling of oil and gas in California.

“California is doubling down on our nation-leading policies to confront the climate crisis head-on while protecting the hardest-hit communities,” said Governor Newsom. “We’re deploying a comprehensive approach to meet the sobering challenges of the extreme weather patterns that imperil our way of life and the Golden State as we know it, including the largest investment in state history to bolster wildfire resilience, funding to tackle the drought emergency while building long-term water resilience, and strategic investments across the spectrum to protect communities from extreme heat, sea level rise and other climate risks that endanger the most vulnerable among us.”

When the Governor signed the state budget and related legislation in July, he and legislative leaders agreed to additional discussions during the summer to further refine steps to advance their shared and funded priorities, including natural resources investments, according to the Governor’s Office.

“The climate package also includes $270 million to support a circular economy that advances sustainability and helps reduce short-lived climate pollutants from the waste sector, and $150 million that will support urban waterfront parks, with a focus on underserved communities,” the Governor’s Office state.

More information on the over $15 billion climate package can be found in the Department of Finance’s addendum to its enacted budget summary.

• SB 403 by Senator Lena Gonzalez (D-Long Beach) to allow the State Water Resources Control Board to order consolidation of an at-risk water system or domestic well in a disadvantaged community;

• SB 109 by Senator Bill Dodd (D-Napa) to create the Office of Wildfire Technology Research and Development at CAL FIRE to evaluate emerging firefighting technology; and

Food & Water Watch’s California Director Alexandra Nagy released a statement in response to the press conference, noting that leaving out such as a “key accelerator” as drilling for fossil fuels is “wildly short sided.”

“Governor Newsom’s $15 billion climate package is impressive in its scope and emphasis on electrification and fire prevention, but it lacks the ultimate fire prevention method: stopping new permits for the drilling of fossil fuels,” stated Nagy. “There can be no discussion of resiliency in the face of wildfires without stopping the rampant expansion of fossil fuel drilling and infrastructure immediately.”

“Under Newsom’s administration over 9,000 oil and gas permits have been granted to fossil fuel companies, directly fueling the flames of these scorching wildfires. Governor Newsom is absolutely correct in his assertion that our climate crisis has accelerated to the point where wildfire season is all year round. But leaving out such a key climate change accelerator as fossil fuels from the most ambitious climate package in the country is wildly shortsighted,” concluded Nagy.

According to the US Drought Monitor, 90 percent of the state is mired in the “extreme drought” category, heightening conditions for fires to spread easily. The fires this year have already put the state on track to outpace that of 2020, the worst on record.

“California continues to be one of the largest producers of oil and gas in America,” said Firebaugh City Councilmember Felipe Perez, EOPA California Leadership Council. “As long as the state produces the fuel of the climate crisis, we cannot seriously claim to be decarbonizing the economy — for the Californian economy is intertwined in the global economy. We must stop fueling the flames of climate change caused by the oil and gas industry. As long as the governor issues drilling permits, lets fracking continue, and allows refineries to operate we are part of the problem. We need to show the way and be a part of the solution.”

As I receive more responses to the Governor’s announcement, I will post them here.

Today’s press conference took place today as the Department of Conservation’s CalGEM continues to approve new and reworked oil and gas permits in Kern County and elsewhere in California, although the approval of fracking permits has declined dramatically in recent months, with the agency denying another 42 fracking permits in August.

The overall number of oil and gas permits approved under Newsom now totals 9,014 since he took office in January 2019, according to NewsomWellWatch.com, a website run by Consumer Watchdog and FracTracker Alliance that maps all California oil wells. CalGEM approved 1,019 oil and gas permits in the first six months of 2021.

Total permit approvals to drill or rework new oil wells fell by 64% in the first six months of 2021 over the same period last year, “giving Governor Newsom an excellent opening to more decisively transition off of fossil fuels,” according to the two groups. The number of permit applications filed by oil and gas companies also fell by 52%.

“Overall, rates of both permit approvals and counts of permit applications to drill new wells have dropped in 2021,” said Kyle Ferrar, Western Program Coordinator at FracTracker Alliance. “While the market traditionally drives permit application counts, Governor Newsom now has the opportunity to reduce the expansion of oil extraction. Starting with a responsible setback for Frontline Communities of at least 2,500 feet from drilling operations, Newsom can limit new drilling and begin California’s transition away from the stranglehold of big oil.”

“The market is the single most important factor suppressing permit applications, but Governor Newsom is also sending the oil industry the right signals by rejecting fracking permit applications and announcing an end to fracking by 2024,” said Consumer Advocate Liza Tucker. “Governor Newsom now has a golden opportunity to seize the moment and come forward with a decisive transition plan off of fossil fuels that includes switching oil workers away from production toward desperately needed well remediation.”

For more information and maps on oil and gas drilling in Los Angeles County, please read Kyle Ferrar’s piece, “It’s Time to Stop Urban Oil Drilling,” https://www.fractracker.org/?p=65832
Add Your Comments
Support Independent Media
We are 100% volunteer and depend on your participation to sustain our efforts!