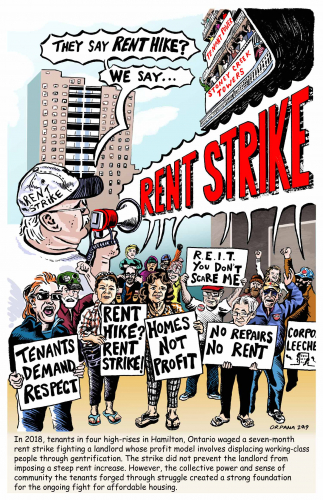 Dozens of tenants of an Oakland landlord withheld over $650,000 in a 13-month rent strike, culminating in a successful collective negotiation that drove the landlord’s investor group, including private equity shareholders, to cancel 30 percent of back rent and reduce current rent.

The Ivy Hill-Alice Tenant Union, representing eight buildings around Lake Merritt owned by Jim Lewis and J Hickingbotham, organized for 13 months amid the economic and emotional toll of the COVID-19 pandemic.

"Collective bargaining is intimidating," Dawn Hosie, a union member, said. "Landlords want it to be intimidating. But the reality is that they're more intimidated by a strike from the people.”

"Housing is a basic human right. We all know the only affordable housing in the Bay Area is a tent, and our government has shown us that there is no way to change that unless we unite and take the fight to the landlords."

65 percent of the union’s 62 members lost income due to the pandemic, and more than half of them are rent-burdened, paying more than 30 percent of their monthly income for rent. Habitability problems, including severe mold, pests and heat issues, are widespread in the union’s several buildings. Many tenants have lived in their units for more than a decade, and without the stability of rent-controlled housing would face displacement from the Bay Area.

Just like workers organize labor unions at job sites for better pay, the tenants united with their neighbors to collectively resist exploitative housing conditions. Many of them unemployed, the organized tenants demanded their landlord negotiate with them in good faith and ultimately cancel 30 percent of the sizable back rent.

“I joined the rent strike after months of dipping into my grad school savings to make ends meet," Stephanie Smith, another union member, said. "“It was a scary decision because I knew that the landlords and real estate investors—who I had never met after 10 years of reliable tenancy—wouldn’t be quick to prioritize my shelter and well-being over profits.

After a few months of striking, my fear and isolation subsided as my trust in the community grew. The landlords’ priorities haven’t changed—but by organizing together, our tenant solidarity defeated the landlords’ greed when they finally came to the negotiating table.”

The union tenants mobilized to persuade the landlord with coordinated phone and email blasts from community members; conspicuously-displayed agitational materials such as rent strike posters; and informational pickets at organizing sites. These collective actions, along with the sustained impact to their landlords’ income, pressured the landlord to negotiate and sign a collective bargaining agreement (CBA).

Throughout, the tenants participated in the broader autonomous tenant union movement. Many of them joined the Tenant and Neighborhood Councils (TANC), a democratic, member-run Bay Area tenant union started by members of East Bay Democratic Socialists of America, and participated in coalition actions to support other tenant councils.

Unlike policy-focused nonprofits or legal clinics, TANC and the Ivy Hill-Alice Tenant Union promote forms of collective social pressure and acts of economic disobedience such as the rent-strike to demand and defend safe and livable housing.

"The Ivy Hill-Alice Tenant Union refused to accept that during a deadly plague and historic unemployment they should continue to sate their landlords’ bottomless desire for profit,” Sam Lefebvre, a Central Oakland Local TANC member, said. “By organizing, they exemplify a movement of tenants who object to their homes being treated as commodities at any time.”

After union members had started collective negotiations with the landlords, lawmakers passed the landlord bailout legislation billed as “rental assistance.” Instead of accepting the terms of legislation such as SB91, premised on landlords deciding to apply for and share their bailout money with qualifying, individual tenants, the Alice-Ivy Hill Tenant Union pivoted to condition their cooperation on terms enshrined in the CBA: Any tenant who wasn’t eligible would receive 30 percent back rent cancellation, and all tenants received a 10 percent reduction to current rent. This offered significant protections for tenants who are eligible for the state’s means-tested relief as well as those who, due to nontraditional work arrangements or other reasons, were not.

The Alice Tenant Union had been organizing since the fall of 2019, when neighbors realized their landlords were charging tenants for heat used in common areas. The tenants defeated the illegal utility-scheme by petitioning the city’s Rent Adjustment Program board. At the outset of the pandemic last March, they started meeting weekly and coordinating mutual-aid among their neighbors, such as assistance with groceries. They pooled funds to supply communal laundry soap, created a PPE station with free face masks and hand sanitizer in the building lobby, and passed out “know-your-rights” materials at socially distanced outside events, including a Halloween block party.

The Ivy Hill Tenants Union, meanwhile, formed last March when tenants of two neighboring buildings owned by the same investor group joined together to demand rent relief. They researched the owners’ extensive property holdings and invited tenants to join the union for training and support around renters’ rights as local, state, and federal policies were enacted to protect tenants from eviction. The group soon grew to include tenants from over 30 apartment units in over 8 buildings across Oakland, with support and guidance from local tenants organizations including TANC.

The Ivy Hill-Alice Tenant Union continues to share its skills and experience with other organized tenants locally through TANC and beyond through the Autonomous Tenant Union Network (ATUN). The tenants, emboldened by their hard-earned win after more than a year of organizing, have also turned their attention to other pressing habitability issues in their buildings.

As much as the material improvements, the tenants value the relationships strengthened and transformed through their collective struggle against the capitalist housing system.

Smith said, “The tenant's union organizers and other strikers, my neighbors, were incredibly transparent, informative, and supportive throughout the pandemic. Our ability to strengthen our bonds and empower ourselves through collective action was priceless. I feel closer to my neighbors than ever before, a major silver lining around the pandemic storm cloud.”
http://@alicetenantunion
Add Your Comments
Support Independent Media
We are 100% volunteer and depend on your participation to sustain our efforts!