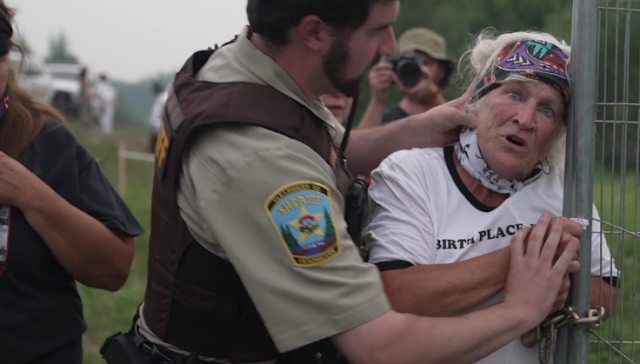 At the end of June the police and criminal justice systems in Northern Minnesota began an escalating and punitive assault on water protectors engaged in non-violent resistance against the Line 3 pipeline. By mid-August this escalation reached the level of torture.

After almost 7 months of ongoing resistance against active construction of Line 3, on June 23rd three water protectors who had locked down to a Horizontal Directional Drill boring under the Straight River were charged with felony theft. Since then nearly 100 water protectors have been charged with felonies and assigned bail amounts ranging from $10,000 -- $50,000 without conditions, and up to $25,000 with conditions.

Shortly after the first felony charges, on June 28, the Hubbard County police department attacked water protectors in their home, blockading the drive way of Camp Namewag and arresting water protectors who attempted to travel along their own driveway.

Increasingly retaliatory police behavior continued into July. At an action on July 2, Hubbard County Sheriff Cory Aukes threatened a mother and her child who were attempting to stand along a road and hold signs in support of water protectors.

When the mother asked where they could stand legally Aukes told them if they didn’t leave they would all be under arrest, and then addressed her four year old child saying, “And kids are not exempt, I will call the foster care system.”

During the remainder of July the police began to turn increasingly towards direct physical abuse and endangerment of water protectors’ bodies. One violent extraction included binding water protectors’ feet and pulling at them while they screamed, an unnecessary abuse that caused lasting nerve damage and other significant injuries.

In August police escalated to torture. On August 11 water protectors shut down two different worksites. Police approached them on the site and when the water protectors refused to leave police began to use a torture tactic they refer to as “pain compliance.”

Immobilizing water protectors’ heads and necks and pressing intensely on pressure points on heads, faces, and jaws, police caused the water protectors to scream in pain.

Engaging in psychological torture they told the water protectors that if they willingly submitted to arrest they could stop the torture being applied to others on the site. Water protectors were subjected to multiple rounds of this treatment, being told in between they would be given time “to think about it.”

Two water protectors came way from the August 11 incident with lasting facial paralysis, a condition called Bell’s Palsy, that could be permanent. One water protector compared the pain to that of child birth, stating it may have been worse. All of those water protectors will be continuing to process the emotional and psychological trauma that results from this kind of person-to-person brutality.

“I wasn’t aware until I got home from jail and looked in the mirror, now that this side of my face has experienced ongoing numbness and lack of muscle function.”

On August 16 the police again tortured water protectors who had shut down a Line 3 worksite along the Shell River. This time water protectors were filming. This video [link] released by the Giniw Collective shows Hubbard County police applying the same techniques that were used.

When it became clear to police that they were being observed they continued to torture one water protector and began another session on another water protector in an apparent act of retaliation. Shortly thereafter they ceased and extracted the water protectors using an extraction team.

“These charges and actions of law enforcement; people should see it’s a growing trend. The reason the (police) have so many resources is because federal agencies are sending ‘anti-terrorism’ money to these local departments...(correlating) the alarming trend of the criminalization of environmental activists and Indigenous peoples.”

Earlier this week, during an extraction that was already in process on August 23, an Aitkin County deputy from the Field Extraction team suggested to other police involved in the extraction that they might want to “try out pain compliance.”

Yesterday, August 26, Aitkin County police were observed yanking on water protectors who were suspended in an aerial device, causing them pain and endangering their lives as they swung precariously 18-20 feet above the ground.

One water protector was strung upside down while police tightly gripped his wrist and applied pressure to coerce him into removing himself. Aitkin county Sheriff Dan Guida handled the extraction himself, zip-tying the water protector in mid air as the bamboo structure swayed dangerously.

Said Jae, a bystander observing the extraction, “To everyone watching the arrest looked reckless and brutal. The cops seemed to entirely disregard the fact that if the structure collapsed the climbers could be paralyzed or die. In fact, they used this to their advantage.”

These actions continue to demonstrate what we already know: the state has clearly sided with Enbridge over any kind of public safety or public interest. But they also show us just how far the state is willing to go to protect a foreign corporation engaged in extraction and environmental degradation.

Torturing people is not a “job.” Abusing the bodies of those protecting the land is not “reasonable.”