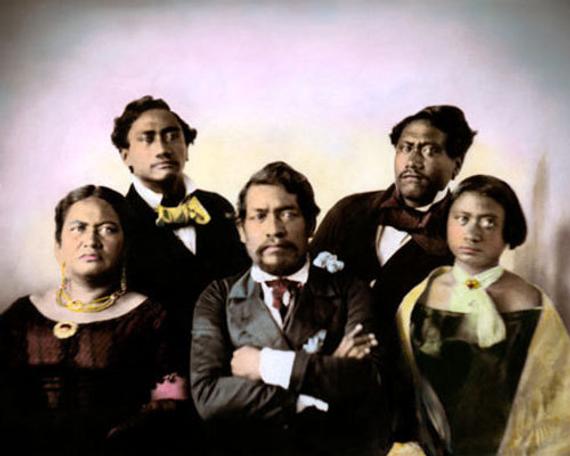 After a brief stay in the Islands, in 1839, John Augustus Sutter, a Swiss seeking his fortune in America, had a “crew consisted of the two German carpenters I had brought with me from the Islands, and a number of sailors and mechanics I had picked up at Yerba Buena.”

“These men were very glad to go with me, and at the expiration of their time, they showed no inclination to return to their people.” (Sutter) He also brought two Hawaiian women – one was Manuiki. (“It’s Kanaka. It means ‘little bird.” (Sutter; Houston))

Manuiki was Sutter’s favorite companion for several years, although she was not the only one. They had several children together. (Herrmann) He jealously guarded his exclusive relationship with her. (Hurtado)

“Manuiki keeps the garden here. The vegetables we eat have come from her garden, though I of course taught her to make the soup. Potatoes are not common fare among the kanakas in their native land.” (Sutter; Houston)

“They’re tattooed, they’re pierced, they’re half naked, they’re dark-complexed, and they don’t look a whole lot different from the Indians in the Central Valley.”

At the time of Sutter’s arrival in California, the territory had a population of only 1,000-Europeans, in contrast with 30,000-Native Americans. At the time, it was part of Mexico.

When they landed and set up New Helvetia (August 13, 1839) “I selected the highest ground I could find. The Kanakas first erected two grass houses after the manner of the houses on the Sandwich Islands; the frames were made by white men and covered with grass by the Kanakas.”

In order to qualify for a land grant, Sutter became a Mexican citizen on August 29, 1840 after a year in the provincial settlement; the following year, on June 18, he received title to 48,827-acres and named his settlement New Helvetia, or “New Switzerland.”

“My hospitality attracted men to me whom I put in charge of various endeavors. The next year we built the fort with walls 18-feet high and three feet thick bought more cannons.”

Sutter employed Native Americans of the Miwok and Maidu tribes, Kanakas and Europeans at his compound, which he called Sutter’s Fort.

“These Hawaiians fished for bass, trout, and catfish and sold them at the Fort and in Sacramento. They learned to raise alfalfa and raised hogs and cattle. The Hawaiians rowed their boats, assembled their tents and played their Ukulele and Guitar. When a visiting Hawaiian brought poi, ti leaves, kukui and other items from home the Hawaiians held barbecues and luau and danced hula.”

Eventually Sutter allowed Manuiki to marry Kanaka Harry, another Hawaiian who came with him in 1839; Sutter set aside property for them on the American River, near the place where they first landed.

On January 24, 1848, a young Virginian named Henry William Bigler recorded in his diary: “This day some kind of mettle was found in the tail race that looks like gold first discovered by James Martial, the boss of the Mill.”

What a great misfortune was this sudden gold discovery for me! It has just broken up and ruined my hard, restless, and industrious labors. … From my mill buildings I reaped no benefit whatever, the mill stones even have been stolen and sold.”

The younger Sutter, who had come from Switzerland and joined his father in September 1848, saw the commercial possibilities of the land and promptly started plans for building a new town he named Sacramento, after the Sacramento River.
http://imagesofoldhawaii.com/manuiki/
Add Your Comments
Support Independent Media
We are 100% volunteer and depend on your participation to sustain our efforts!