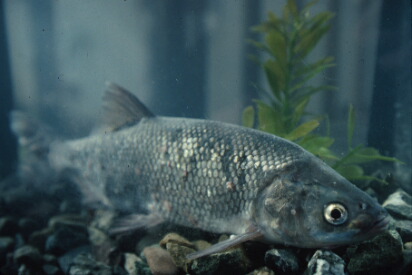 CLEAR LAKE, Calif., August 17, 2021 — The Center for Biological Diversity filed a lawsuit today, in the Northern District of California, against the U.S. Fish and Wildlife Service challenging the agency’s failure to protect a fish called the Clear Lake hitch under the Endangered Species Act. Despite clear scientific evidence that the hitch is likely to become an endangered species due to many threats, including climate change, the Trump administration denied it protection in a December 2020 determination.

Clear Lake hitch were once so plentiful that it was easy to find millions swarming up the lake’s feeder streams during their spectacular spring spawning runs. A staple food and cultural mainstay of the original Pomo inhabitants of the region, Clear Lake hitch are also an important food source for numerous birds, fish and other wildlife. In recent years, however, only a few thousand fish have spawned.

“We can’t afford to lose the Clear Lake hitch. This is a native fish that’s vital to the Clear Lake ecosystem and the cultural legacy of the Pomo people,” said Meg Townsend, a staff attorney in the Center’s endangered species program. “One of California’s most imperiled fish should not be denied protection based on the past administration’s misinformation, fuzzy science and climate change denial.”

A 2014 status review determined that suitable hitch habitat has degraded significantly, with an 85% loss of wetland habitat important for rearing, a 92% loss of spawning habitat, and degraded water quality in Clear Lake and throughout most of its tributaries.

Under President Donald Trump, the Service asserted that major threats to the hitch such as loss of spawning habitat, climate change, drought and predation and competition from introduced fish are not likely to adversely affect the viability of Clear Lake hitch “in a biologically meaningful way.”

These findings contradict the conclusions of native fish experts, as well as the California Department of Fish and Wildlife and California Fish and Game Commission, that the hitch is a threatened species.

The state found that predation and competition by introduced fishes have a significant impact on hitch. It also predicted that climate change impacts on stream flows and annual hitch spawning cycles will be significant. A 2013 report by California native fish experts concluded that hitch are “critically vulnerable” to the impacts of climate change.

“It’s telling that the state of California protected the hitch as a threatened species based on sound science, while the Fish and Wildlife Service under Trump was presented with the same evidence and chose to ignore it,” said Townsend. “Our lawsuit seeks an honest assessment of the hitch’s status and the severe threats to its very existence.”

The 2020 federal finding claims hitch do not require tributary streams to reproduce, but can also spawn in Clear Lake itself, giving them “behavioral flexibility to variable environmental conditions.” But the state review concluded that hitch require tributary streams to spawn successfully. A 2019 U.S. Geological Survey study concurred that in-lake spawning is unlikely to support the hitch’s recovery in the long term.

Clear Lake hitch migrate out of the lake each spring, when adult fish swim up tributary streams to spawn. Their numbers have declined due to water diversions, climate change and drought, degradation of spawning habitat, migration barriers, pollution, and competition and predation from invasive fish species. The lake and its tributaries have been dramatically altered by urban development and agriculture. Most of the lake’s stream and wetlands habitat has been destroyed or degraded, and barriers that impede hitch migration have been built in many streams.

The spawning runs from 2013 to 2015 were the worst in recorded history, with an annual average of fewer than 1,000 spawning fish in the entire Clear Lake basin. Spawning numbers have increased somewhat since then but are still vastly reduced. Since 2013 the average number of spawning fish in the two most important tributaries, Kelsey Creek and Adobe Creek, has been under 1,700 fish annually.

Clear Lake hitch have adapted to a very brief period of suitable stream conditions for their annual spawning run. Water diversions cause streams to prematurely dry up, progressively earlier in the year. On May 10, Gov. Gavin Newsom declared a state of emergency in Lake County due to drought conditions. Rapid climate change due to global warming will likely cause further spawning failures.

The closest relative of the Clear Lake hitch was the Clear Lake splittail, a fish driven to extinction in the 1970s due to habitat alterations that dried out spawning streams and barriers that prevented its spawning migration.

The Center submitted petitions in 2012 to protect the hitch under both the federal and state endangered species acts. The Clear Lake hitch was designated as a threatened species under California’s state Endangered Species Act in 2014.


https://biologicaldiversity.org/w/news/press-releases/lawsuit-seeks-protection-for-northern-californias-clear-lake-hitch-2021-08-17/
END_OF_DOCUMENT_TOKEN_TO_BE_REPLACED
Add Your Comments
Support Independent Media
We are 100% volunteer and depend on your participation to sustain our efforts!