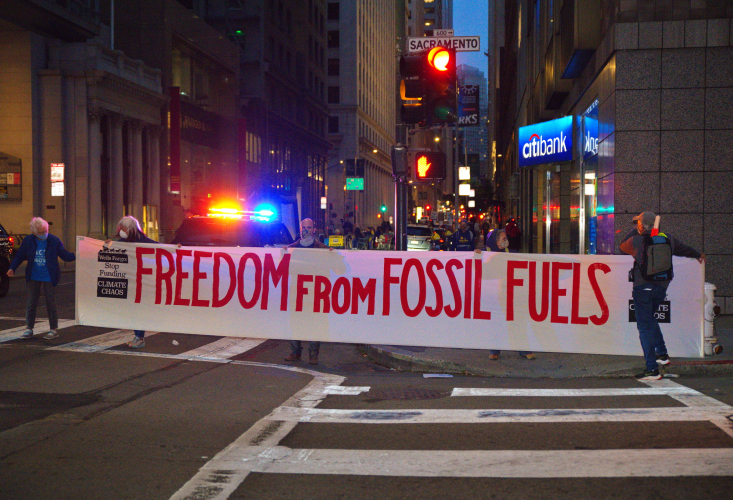 On Friday evening, organizations including: participated in a National Day of Action to Defund Line 3.

As human caused planetary incineration becomes ever more evident, environment groups are resisting. They are pushing back against the financial and industrial structures that are destroying the atmosphere by burning fossil fuels.

At 7pm, on the steps of BofA's California Street building, about fifty people participated in NVDA (Non Violent Direct Action) training. Experienced activists told of how to place mind and body in a place so as to best deal with police, hecklers, etc.

As night fell, on Montgomery Street, cleared by 1000 Grandmothers, a "Guerilla Movie" was shown in front of the Wells Fargo "World" Headquarters office. The movie, "First Daughter and the Black Snake," told how Native Americans have, in one instance, stopped an Enbridge pipe line.

A couple of Wells Fargo "spokespeople" began a presentation about the Bank's "wonderful" environmental achievements. They became quite "upset" as their audio visual degenerated into frightening images of burning forests and homes.

On July 23rd, major banks (such as JPMorgan Chase, Wells Fargo, and Citibank) had loans worth nearly $6 billion to Enbridge, the company behind Line 3, that were due for renewal.

Devastating Anishinaabe territory, Enbridge is spilling drilling fluid into the wetlands of the Mississippi headwaters as it rushes to complete the Line 3 pipeline. Hundreds of Water Protectors are chaining themselves to drilling equipment to prevent Enbridge from violating Anishinaabe treaty rights. Enbridge is currently violating 21 river crossings and hundreds of waterways across Minnesota. If completed, the expanded tar sands pipeline would unleash the emissions equivalent of fifty new coal plants.

Protesters called out what they view as hypocritical greenwashing Enbridge's pledge to use zero emission vehicles to build a pipe line that will promote yet more fossil fuel consumption, and profits. 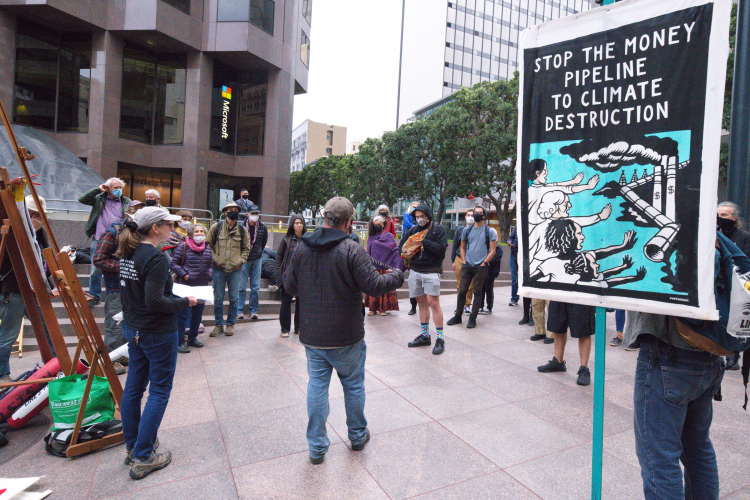 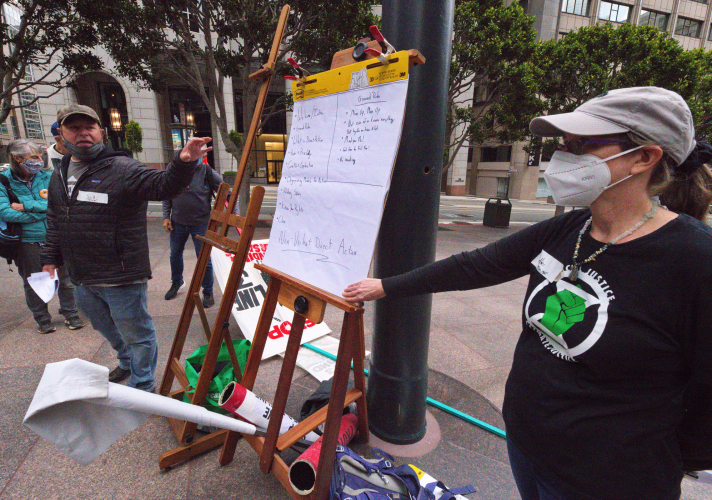 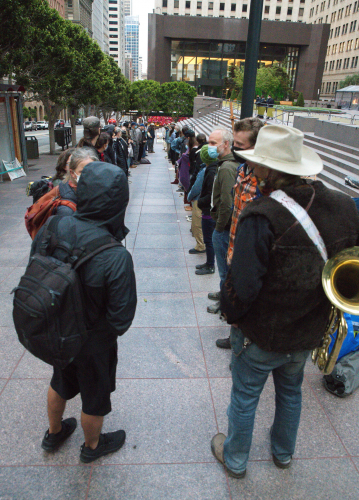 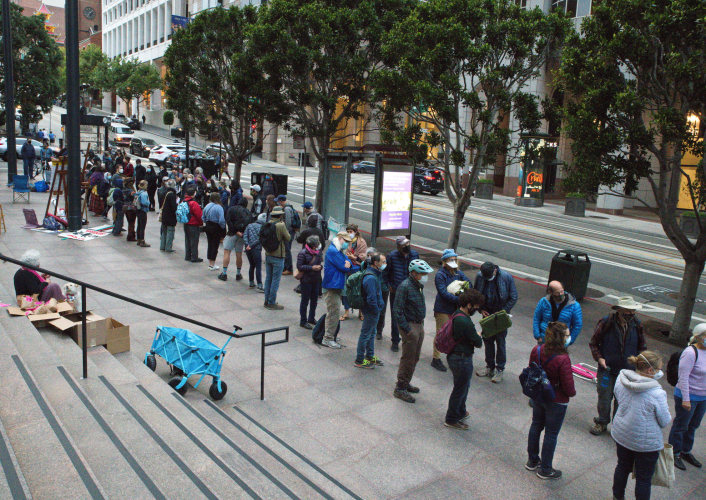 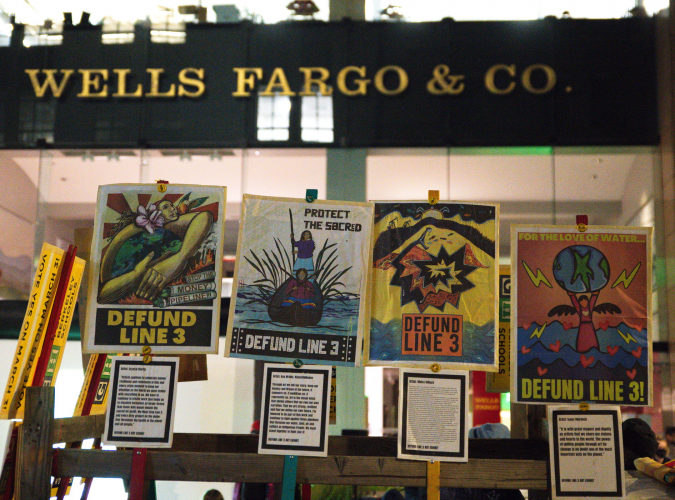 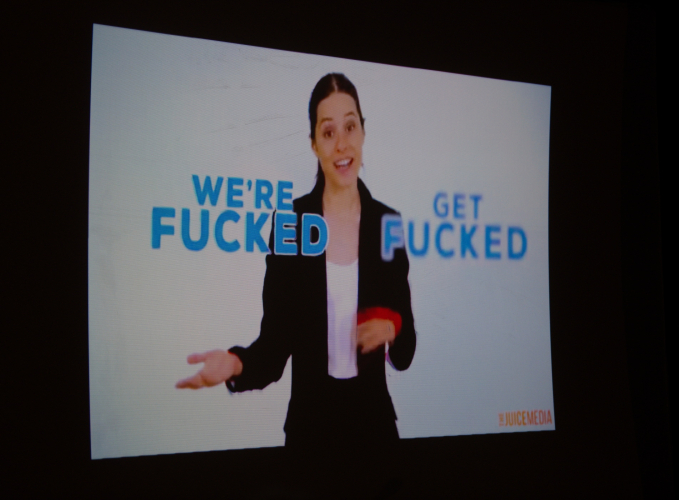 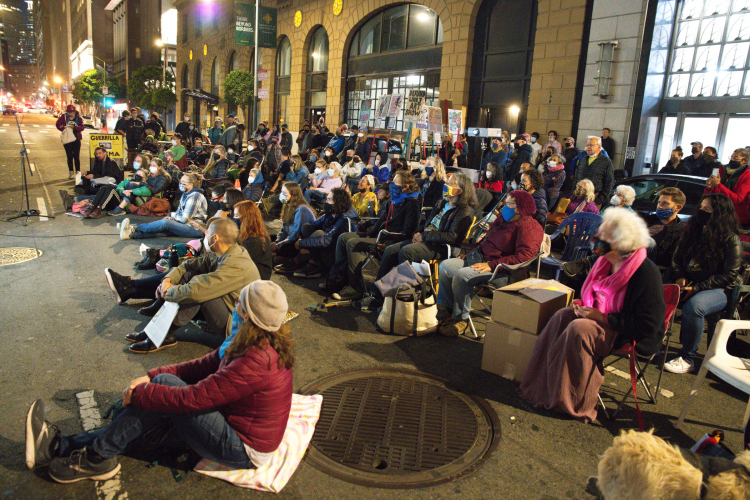 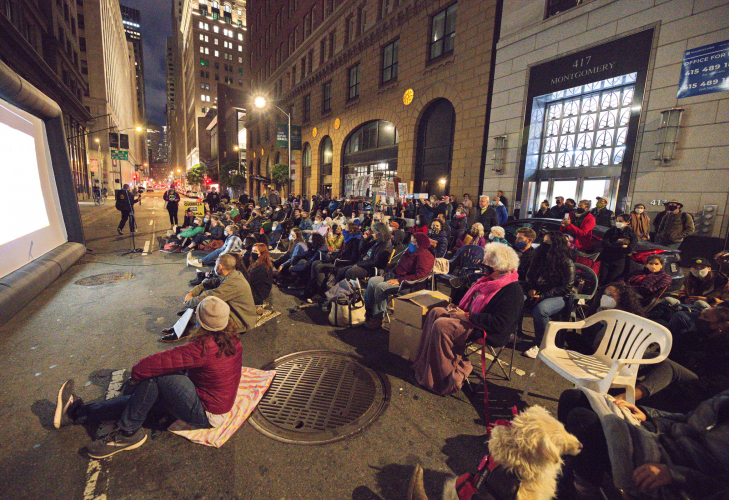 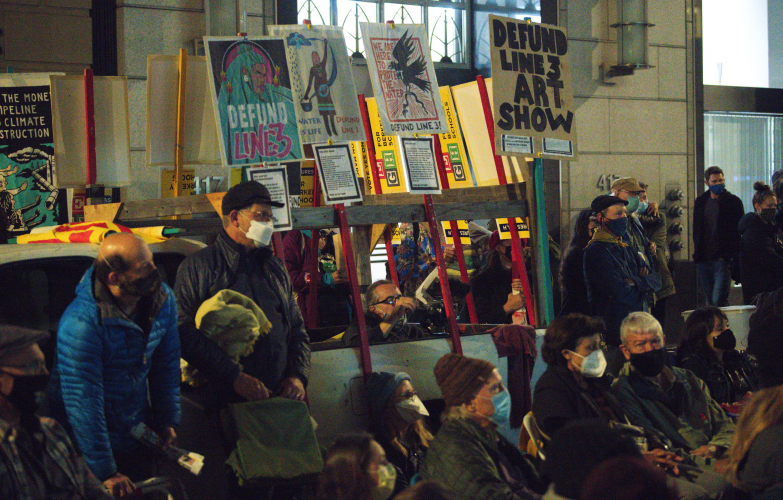 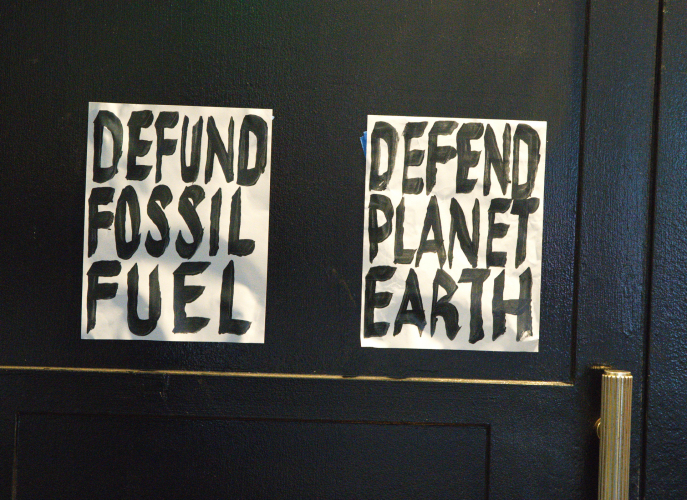 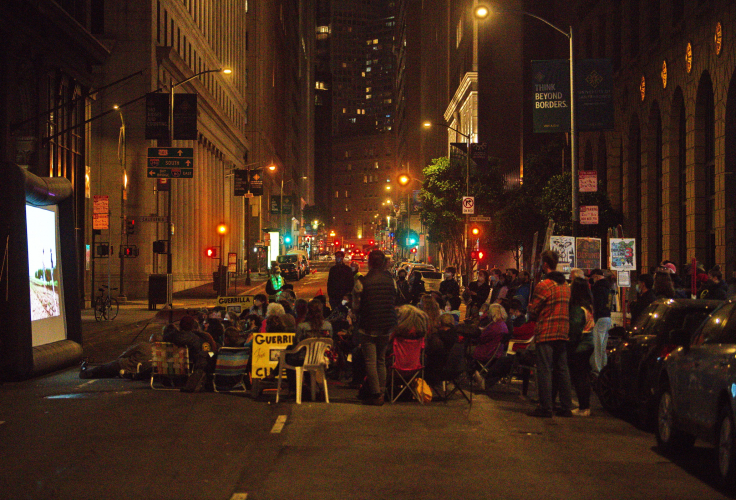 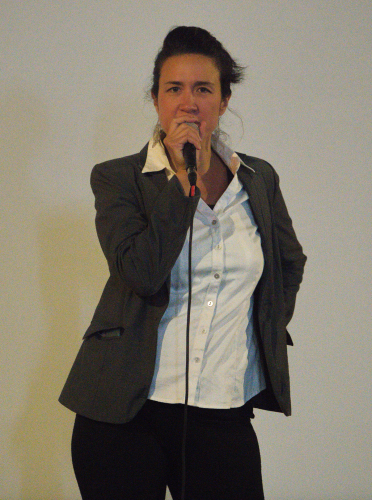 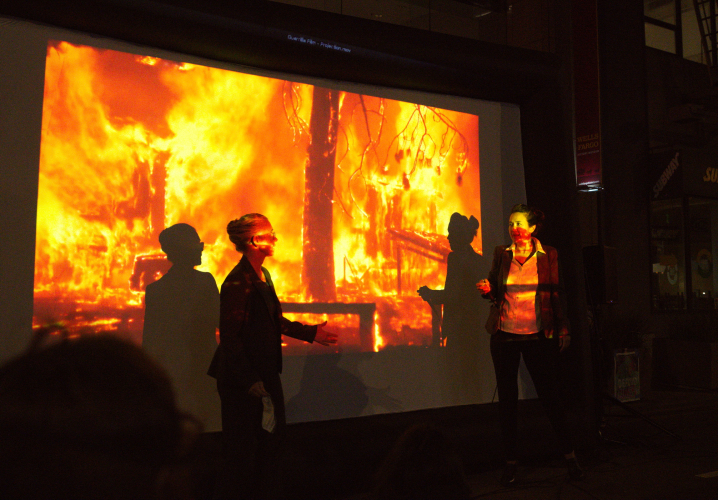 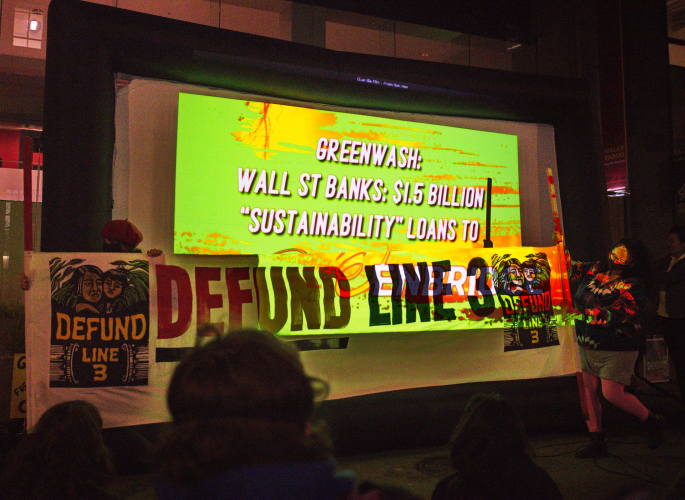 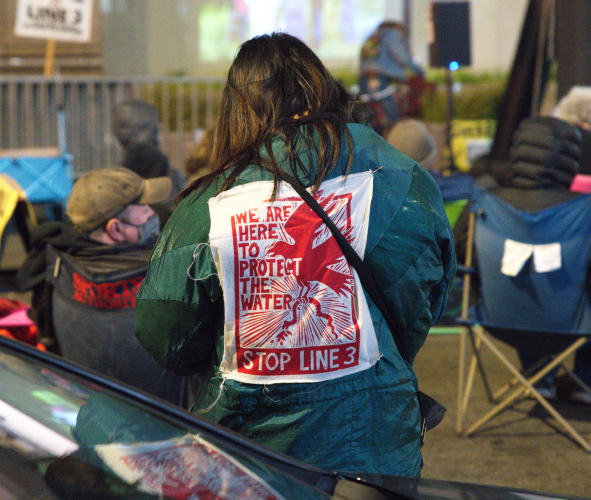 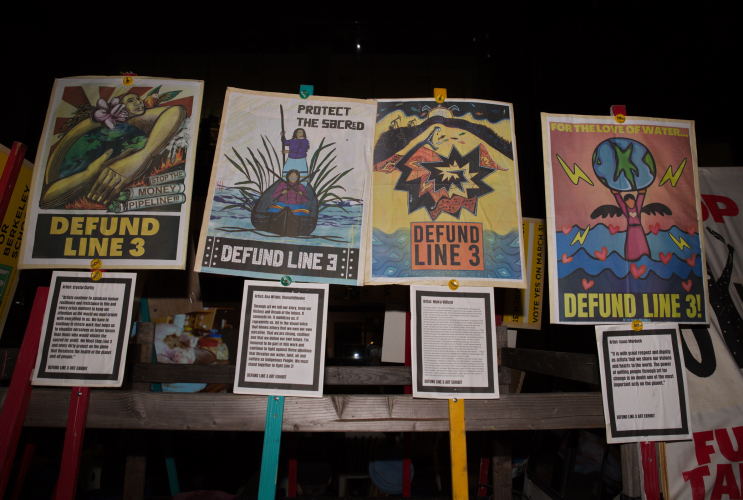 original image (2083x1400)
https://actionnetwork.org/events/defundlin...
Add Your Comments
Support Independent Media
We are 100% volunteer and depend on your participation to sustain our efforts!