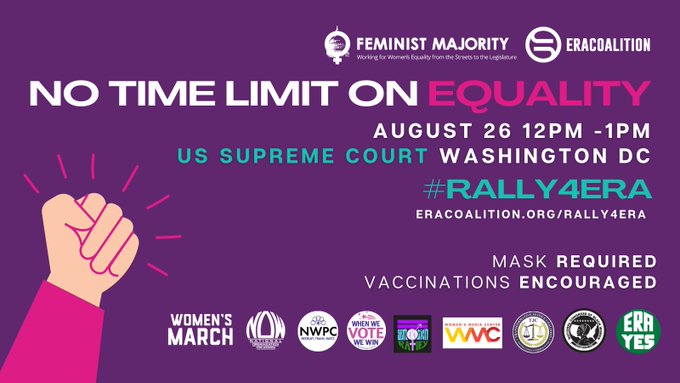 
This is a very critical time for the Equal Rights Amendment. The Senate must act in the
name of equality.

Our goal is to amend the Constitution with the addition of the Equal Rights Amendment to ensure that one cannot be discriminated against because of one’s sex. There has been extraordinary progress in the movement toward full equality.

But in 2017 Nevada ratified the ERA; the first state in 40 years to do so; Illinois ratified in 2018. And Virginia ratified it on January 27th, 2020, and on February 13th, 2020 the House of Representatives voted to dissolve the time limit written in the amendment’s introduction.

While it wasn’t taken up in the Senate last year, we’re hopeful it will pass both houses of Congress this year, since its 2021 bipartisan and bicameral introduction!

Join the #Rally4ERA on Women's Equality Day to demand the passage of legislation to end
the time limit on the ratification of the Equal Rights Amendment.

No Time Limit on Equal Rights!

original image (1500x582)
END_OF_DOCUMENT_TOKEN_TO_BE_REPLACED
Add Your Comments
Support Independent Media
We are 100% volunteer and depend on your participation to sustain our efforts!