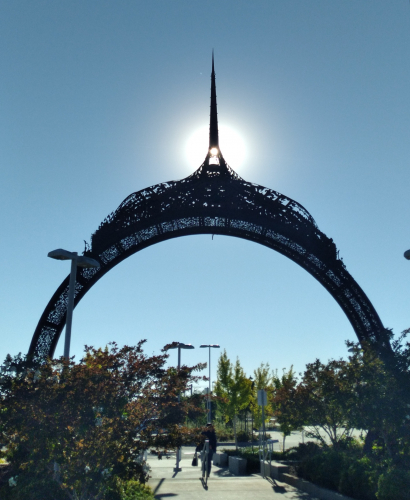 original image (1997x2433)
The text of An Act For The Admission Of The State Of California Into The Union reads as follows: U.S. Senate Bill 169, 31st Congress

Preamble Whereas the people of California have presented a constitution and asked admission into the Union, which constitution was submitted to Congress by the president of the United States, by message dated February thirteenth, eighteen hundred and fifty, and which, on due examination, is found to be republican in its form of government:

Section 3 And be it further enacted, that the said state of California is admitted into the Union upon the express condition that the people of said state, through their legislature or otherwise, shall never interfere with the primary disposal of the public lands within its limits, and shall pass no law and do no act whereby the title of the United States to, and right to dispose of, the same shall be impaired or questioned; and that they shall never lay any tax or assessment of any description whatsoever upon the public domain of the United States, and in no case shall nonresident proprietors, who are citizens of the United States, be taxed higher than residents; and that all the navigable waters within the said state shall be common highways, and forever free, as well to the inhabitants of said state as to the citizens of the United States, without any tax, impost, or duty therefore: provided, that nothing herein contained shall be construed as recognizing or rejecting the propositions tendered by the people of California as articles of compact in the ordinance adopted by the convention which formed the constitution of that state.

Approved, September 9, 1850.[14]
Add Your Comments
Support Independent Media
We are 100% volunteer and depend on your participation to sustain our efforts!