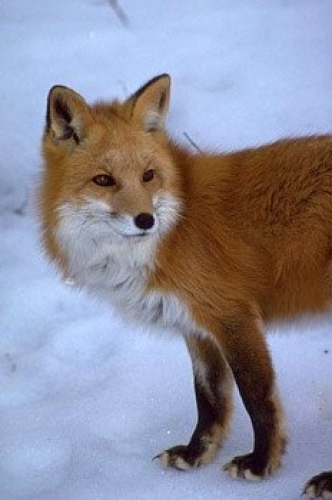 original image (1200x1805)
These secretive foxes live in remote, high mountains in the Sierra Nevada and Cascade ranges of California and Oregon. The Service is designating only the Sierra Nevada population, which ranges from Yosemite National Park to Kings Canyon National Park, as an endangered species under the Endangered Species Act even though the species occurs in the Cascades to Mt. Hood in Oregon, where the animals face the same threats.

“The Sierra Nevada red fox is a vanishing emblem of remote Sierra wilderness and a harbinger of climate change,” said Jeff Miller, a senior conservation advocate at the Center. “Endangered Species Act protections can give this adorable canine a fighting chance at survival and recovery. This is an important step, but the Fish and Wildlife Service should also protect these imperiled animals in the Cascades.”

The Center petitioned for protection of the red fox in 2011 and filed lawsuits in 2013 and 2019 to force the Service to decide on the animal’s protection.

The Sierra Nevada red fox once was found throughout the Sierra Nevada mountains, but populations have declined dramatically because of poisoning and trapping, habitat destruction from logging and livestock grazing, and disturbance from off-road vehicles and snowmobiles. Trapping the species is now banned in California.

Only one small, isolated population with an estimated 18 to 39 adults remains in the Sierras, mostly in and around Yosemite National Park.

Climate change is projected to dramatically shrink the Sierra Nevada red fox’s subalpine habitat as hotter and drier conditions push its range farther up mountain slopes. Climate change is reducing the Sierra snowpack, causing increased competition for food with coyotes. These foxes are jeopardized by inbreeding depression due to small population size and hybridization with nonnative red foxes.

Disturbance from humans, particularly from snowmobiles, is also a threat. Habituation of foxes to humans and human food sources may subject them to dog attacks, dog diseases and vehicle collisions.

Active mostly at night, Sierra Nevada red foxes spend winters in dens in earthen cavities in mature forest. They summer in high meadows, fell fields, talus slopes and shrub lands. They are adapted to cold and have particularly thick and deep winter coats and furry toe pads that help them to walk over snow. Their diet consists of rodents, small mammals, fruit, birds, insects and carrion. They are born into one of three color phases (red, black or cross) and are distinguishable from other native foxes by their black-backed ears and white-tipped tails.


https://biologicaldiversity.org/w/news/press-releases/sierra-nevada-red-fox-population-gains-endangered-species-act-protection-2021-08-02/
Add Your Comments
Support Independent Media
We are 100% volunteer and depend on your participation to sustain our efforts!