Sacramento: March On for Voting Rights 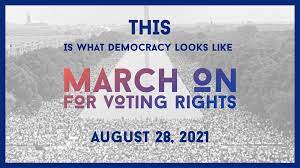 On Saturday, August 28th, voting rights activists will be marching on Washington D.C.
and in cities across the nation. Join us in Sacramento to protest voter suppression and defend democracy.


Voting Rights Are Under Attack

Since January, 48 states have introduced 389 bills that amount to shameful, outright voter suppression, and many have already become law. These laws suppress voting methods that enrich our democracy and lead to high turnout: banning ballot drop boxes and mail-in voting, reducing early voting days and hours, restricting who can get a mail-in ballot, prohibiting officials from promoting the use of of mail-in ballots even when voters qualify, even criminalizing the distribution of water to voters waiting in the long lines these laws create.

Racist, anti-democratic voter suppression laws amount to rigging the game. But in America, elections are not a game—and lives depend on their outcomes.

That’s why, on August 28, 2021, we’re marching on Washington D.C., as well as Sacramento, Atlanta, Miami, Houston, Phoenix and other cities across America.


The Legacy of MLK Jr. Continues

On August 28, 1963, Dr. Martin Luther King led 250,000 people on a historic
March On Washington. There, in front of the Lincoln Memorial, he delivered his famous
“I Have a Dream” speech, calling on the nation to rise up and live out the true meaning
of its creed. At the time, Black Americans were living under the tyranny of laws—
called “Jim Crow” laws— that legalized racial discrimination. His speech that day has become one of the defining moments in American history.

Today, state legislatures are pushing America back to the Jim Crow era with laws that reinstate systemic discrimination at the ballot box. That is why, on August 28, 2021—58 years to the day after his father’s march—Martin Luther King III will help to lead Americans on another march to demand federal voting rights protection.

Marching is a form of nonviolent protest, and protest is a form of democratic expression
older than America itself. We march to shine the light of truth on what is happening in state legislatures, ensure that Americans understand what’s at stake, and give people a mechanism to demand action on this most urgent issue of our generation. 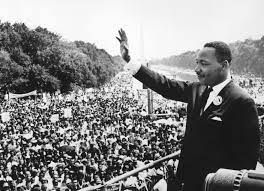 — Rev. Dr. Martin Luther King, Jr.
END_OF_DOCUMENT_TOKEN_TO_BE_REPLACED
Add Your Comments
Latest Comments
Listed below are the latest comments about this post.
These comments are submitted anonymously by website visitors.
TITLE
AUTHOR
DATE
March On Vitual Rallies: Online Voting Rights Rallies & Actions Option Available
March On
Support Independent Media
We are 100% volunteer and depend on your participation to sustain our efforts!