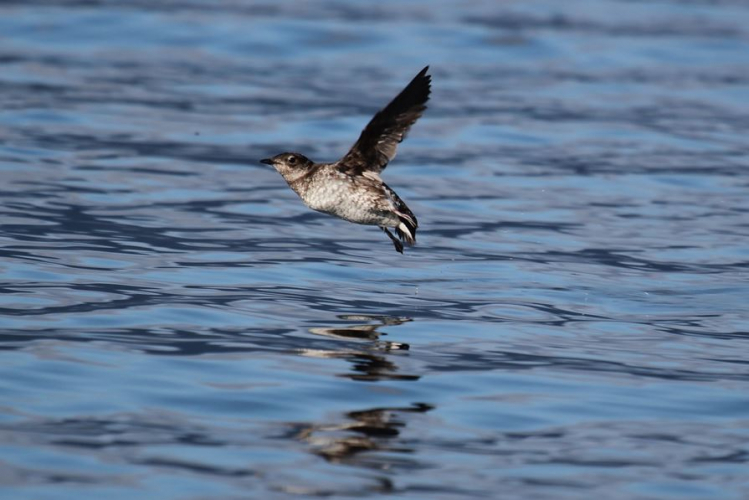 original image (895x597)
SALEM, Ore., July 9, 2021 — The Oregon Fish and Wildlife Commission today approved a petition filed by five conservation groups to give marbled murrelets more protection by reclassifying them from threatened to endangered under the state’s Endangered Species Act. The 4-3 decision comes two years after an Oregon judge ruled that the commission had violated state law by denying the petition without explanation in 2018.

“We’re relieved that after so many missteps, the Oregon Fish and Wildlife Commission will finally move forward with extending marbled murrelets the full protection of endangered status under state law,” said Quinn Read, Oregon policy director at the Center for Biological Diversity. “These unique birds face serious threats in Oregon from climate change, ocean warming, wildfire, and unchecked logging of their nesting habitat and should have been protected as endangered years ago.”

The marbled murrelet is a small seabird that nests in old-growth and mature forests and forages at sea. Its population has declined dramatically in recent decades due to extensive logging in Oregon’s coast range.

The bird was listed as threatened under the Oregon Endangered Species Act in 1995. But Oregon has allowed intensive clearcut logging to continue in marbled murrelet habitat on lands owned and regulated by the state.

According to the Oregon Department of Fish and Wildlife’s 2021 biological assessment, the marbled murrelet is considered one of the least resilient species to climate change and is at risk of being wiped out by a single catastrophic event, like wildfire.

Uplisting to endangered status requires the state to develop a management plan and survival guidelines, providing much-needed protection for the species.

“We applaud the commission for choosing to safeguard Oregon’s imperiled marbled murrelet population and its fragile forest habitat by uplisting the species to endangered,” said Danielle Moser, wildlife program coordinator for Oregon Wild. “This decision is not only in step with science and Oregon law, but also illustrates the commission’s willingness to be conservation leaders in the fight against the extinction crisis.”

The groups petitioned the commission to uplist the marbled murrelet in 2016. The Department conducted a status review the following year to assess the murrelet’s condition and found that murrelets were at high risk of extinction, due largely to loss of nesting habitat from ongoing clearcut logging on lands managed by the state of Oregon.

The status review provided copious evidence from multiple peer-reviewed studies that murrelets are at serious risk in Oregon. The best available science predicts the extinction probability at 80% by 2060 along Oregon’s central and north coasts and 80% by 2100 along Oregon’s south coast. California and Washington have already classified murrelets as endangered.

“Today’s decision is a victory for the marbled murrelet,” said Sristi Kamal, senior representative for the Northwest Program at Defenders of Wildlife. “After four years of advocating to uplist the species, this decision has been a long time coming, and we are thrilled. Marbled murrelets face significant habitat loss due to excessive logging, and warming ocean waters due to climate change is impacting the species ability to forage and nest. We applaud the commission for taking a big step in the right direction which will give this species a much-needed opportunity to recover in the state.”

In February 2018 the commission voted 4-2 to accept the petition and increase the seabird’s protections. The commission then instructed the wildlife agency’s staff to begin development of mandatory species survival guidelines as required under Oregon law. Yet, under pressure from the timber industry and its allies, the commission reversed itself without explanation and voted 4-2 in June 2018 to deny the petition it had accepted just four months earlier.

“It has been more than 25 years since the marbled murrelet was listed under the Oregon Endangered Species Act, and during that time this amazing seabird has moved closer and closer to extinction in large part because of logging of its habitat on lands owned and managed by the state of Oregon,” said Joe Liebezeit, staff scientist and avian conservation program manager with Portland Audubon. “The commission made the right choice today based on both the law and science and hopefully is setting this species on a path toward recovery. However, today’s decision is just a first step. The decision to uplist needs to result in much more aggressive action on the ground to protect murrelets in Oregon.”

“At long last, marbled murrelets will receive essential additional protections from the state of Oregon,” said Bethany Cotton, conservation director for Cascadia Wildlands. “While these protections should have been implemented years ago, we are grateful that ultimately science and law triumphed and murrelets will have a better chance in the face of a rapidly changing climate and aggressive private logging in their remaining old growth forest habitat.”

Lane County Circuit Court Judge Lauren Holland concluded in August 2019 that the Fish and Wildlife Commission had illegally changed its decision after first voting to accept the petition to list the murrelet as endangered.

“The marbled murrelet is in trouble, and today’s action is an important first step in ensuring Oregon can help the seabird recover,” said John Mellgren, general counsel for the Western Environmental Law Center. “We look forward to working collaboratively with the Oregon Department of Fish and Wildlife to ensure the murrelet can always call Oregon home.”

Defenders of Wildlife is a national wildlife conservation organization with nearly 2.2 million members and supporters dedicated to protecting imperiled and native species and their habitats.

Portland Audubon is a nonprofit conservation organization with over 17,000 members in Oregon with a mission to inspire all people to love and protect birds, wildlife, and the natural environment upon which life depends.

The Western Environmental Law Center uses the power of the law to safeguard the public lands, wildlife, and communities of the American West in the face of a changing climate.

Cascadia Wildlands defends and restores Cascadia’s wild ecosystems in the forests, in the courts and in the streets