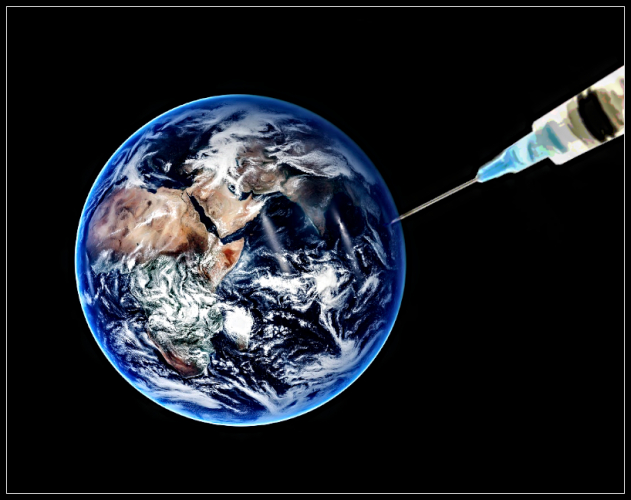 Oppose the right-wing campaign against vaccination!

Statement of the Editorial Board at the World Socialist Web Site

The campaign being carried out against mass vaccination is thoroughly right-wing and must be opposed by workers throughout the world. Under conditions of the global pandemic of a lethal virus, which has killed more than four million people, according to official figures (in reality, far more than 10 million), mass vaccination is an elementary requirement of public health and the self-defense of the working class.

Even the presentation of the issue as one of “vaccine mandates” is false to the core, since it treats the issue of vaccination as if it is some sort of infringement on “personal liberty.” In fact, no individual has the “right” to infect others and endanger their lives.

The safeguarding of public health in a mass society depends on a whole host of regulations: the wearing of seatbelts and speed limits, proscriptions against drunk driving and smoking in public places, maximum occupancies for buildings, rules for handicapped parking and many other measures. Then there are the achievements won through bitter struggle by the working class (and everywhere under attack) like the eight-hour day and the prohibition of child labor.

It is always the most right-wing forces that oppose the protection of social rights by raising the banner of “individual rights,” the most notorious of which is the “right of profit.”

As for vaccinations, this is now a routine requirement for foreign travel, frequently to protect travelers against diseases in the countries they are visiting, to which they may lack native immunity, but also against widespread diseases like tuberculosis and malaria. These are protections against death and severe illness, not infringements on “personal liberty.”

It is, likewise, commonplace that children are required to “have their shots” before attending school, including against MMR, polio and other illnesses, despite the criminally irresponsible efforts of “anti-vaxxer” groups. Once a version of the COVID-19 vaccine is developed that is effective and safe for children, which hopefully is only months away, that should become a compulsory requirement for school attendance as well.

There is nothing in the least progressive about the campaign against “vaccine mandates.” It is based on appeals to ignorance, fear and anti-scientific prejudice. Those who are campaigning against vaccinations by claiming they are an intolerable violation of personal liberty are peddling anarchism and libertarianism, which has nothing in common with the interests of the working class.

It should come as no surprise that the trade unions, which have done nothing to protect workers against the pandemic, have joined in the campaign. The Service Employees International Union, which refused to fight the wave of infections and deaths in nursing homes last year, called a demonstration last week in New York City against mandatory vaccination of health care workers. There, Randi Weingarten of the American Federation of Teachers, who has demanded the reopening of all schools for in-person instruction regardless of the pandemic, mouthed phrases against vaccine requirements because of the need “for everyone to feel safe and welcome in their workplaces.”

Given the fact that the consequences of an infected person working in a crowded workplace, school or hospital can be catastrophic, the requirement that he or she be vaccinated is entirely legitimate and necessary.

It is unavoidable that anyone who has access to a vaccine but refuses to get it cannot be allowed to work beside others. In such cases, the individual should be placed on furlough, which can be brought to an end as soon as he is vaccinated. This must be combined with a systematic public education campaign, led by medical experts and health care workers, to explain the benefits and insignificant risks of being protected against COVID-19.

To pose the problem as one of individual negligence, however, is fundamentally wrong. It is not workers who are responsible for the catastrophic spread of COVID-19, but the ruling class. A genuine change in public attitudes involving millions of people is possible only under conditions in which there is an industrial and political movement of the working class against the entire policy of the financial oligarchy in response to the pandemic.

The campaign against “vaccine mandates” is the latest stage in the opposition of the ruling class to all necessary measures to stop the spread of the pandemic. It is truly tragic that many of those who have been entrapped by this campaign, by failing to take a vaccination are placing their own lives and the lives of family members and co-workers at grave risk.

Not only has there been no mass education campaign to promote vaccination, but there has been a systematic miseducation campaign from the ruling class throughout the pandemic, combined with the longer-term promotion of reactionary anti-scientific conceptions.

The entire response of the ruling class to the pandemic has been shot through with deceit and criminality. From the initial downplaying of the danger, to the efforts to force workers back to work even as the pandemic was still spreading, to the lying claim that it was China that was responsible for mass death and not the capitalist oligarchy that refused to take the necessary measures to stop it.

The policies of the Biden administration, building on those of the Trump administration, seem almost deliberately calculated to fuel public skepticism. Trump and his fascistic followers denounced all public health measures from the beginning, attacking lockdowns and pledging to “liberate Michigan” and other states with even limited restrictions. Republican-ruled states now have the noxious combination of low vaccination percentages and accelerating infection rates as the Delta variant runs wild. Alabama Governor Kay Ivey now blames the soaring coronavirus toll on the unvaccinated, but it was her own party that led the campaign against taking the threat of the pandemic seriously.

The Biden administration set as its top priority the reopening of in-person education, regardless of the impact on teachers and students, so that parents could be sent back to work in factories and offices. The Centers for Disease Control and Prevention ended its regulations on mask mandates following the Biden administration’s claim that the pandemic was effectively over. It has been compelled to partially backtrack and advocate mask-wearing for the vaccinated under limited circumstances only because the explosive growth of the Delta variant made some change unavoidable.

Mass vaccination is only one component of what must be a global effort to eradicate the virus, through masking, social distancing, mass testing and the shutdown of nonessential production until the entire population of the world has been made safe. Such an effort, to be paid for by the trillions accumulated by the super-rich, requires the political intervention of the working class against the policies of the capitalist ruling elite, which at every point prioritizes profits over human life and the interests of rival nation-states over the collective needs of humanity.

On a global scale, the vast majority of humanity has as yet no access to vaccines at all, as the vaccine-producing countries in the industrialized world have hoarded virtually the entire supply. Barely one percent of the population of Africa have been fully vaccinated. The rates in South and Southeast Asia are not much better. And the vast social polarization in every capitalist country means that the wealthy and the upper-middle class may have easy access to vaccination, but the poor have virtually none.

This is true in the wealthy countries as well. A major obstacle to vaccination in the United States is poverty, both for those living in urban slums and those in rural isolation. One recent study found that, according to Census Bureau data, more than half of unvaccinated Americans live in households with incomes of less than $50,000 annually. The study’s authors remarked that in explaining the failure to get an inoculation, despite an ample supply of vaccines, “juggling work schedules and child care could be bigger factors than politics.”

The policy of the working class must combine political intransigence and patient explanation. The development of a class-conscious labor movement, through the organization of rank-and-file safety committees in every workplace, would enable workers, particularly those in health care, to become advocates in a political campaign to require vaccination and protect their class from the deadly danger of the pandemic.

The fight against the pandemic is not simply a medical issue. It requires a political struggle of the working class against the capitalist system. The response to the pandemic in the interests of public health requires a global plan and global coordination, which is possible only through the building of an international revolutionary leadership and the taking of power by the working class.

https://www.wsws.org/en/articles/2021/07/2...
Add Your Comments
LATEST COMMENTS ABOUT THIS ARTICLE
Listed below are the latest comments about this post.
These comments are submitted anonymously by website visitors.