Add an Event
Newswire
Calendar
Features
Home
Donate
From the Open-Publishing Calendar
From the Open-Publishing Newswire
Indybay Feature
Related Categories: U.S. | Government & Elections
Republicans rally for Trump mob as hearing details fascist violence
by Barry Grey (WSWS repost)
Wednesday Jul 28th, 2021 7:25 AM
The openly fascist faction of the House Republicans, led by Marjorie Taylor Greene, held a press conference in front of the Justice Department to defend what they called the “political prisoners” imprisoned for their roles in the January 6 assault on Congress. 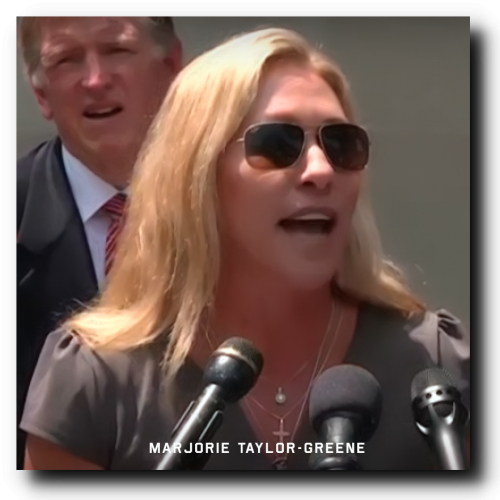 At the initial hearing of the House select committee to investigate the January 6 coup, held Tuesday, four police officers who battled armed fascist insurgents incited by Donald Trump to overrun the U.S. Capitol gave graphic testimony of the violence and murderous intent of the mob.

Accompanied by video of the attack, including newly released bodycam clips, two U.S. Capitol Police officers, Aquilino Gonell and Harry Dunn, and two D.C. Metro Police officers, Michael Fanone and Daniel Hodges, pointed to the large presence of military and police, as well as military-clad militia members in the crowd.

Officer Hodges said he had “no doubt” the insurrectionists intended to kill elected officials in order to block the congressional certification of the Electoral College victory of Joe Biden in the presidential race. He and his fellow witnesses had been seriously injured by the attackers, who massively outnumbered the police, denied standard “less lethal” crowd control munitions by their commanders.

Asked what he wanted the committee to do, Officer Fanone said, “A lot of these events happened in plain sight. Violent rhetoric. A rally whose title was ‘Stop the Steal.’ I don’t believe it was an accident that it was on January 6, when you were tasked with tallying the votes in the election. The time, the place and the circumstance of that rally leads in the direction of our president and members of Congress.”

The hearing was dominated by the unprecedented political crisis in the United States, marked by the transformation of the Republican Party into a fascist party under the personalist leadership of would-be Führer Donald Trump, with a paramilitary wing of far-right militia forces.

The Republicans at the national and state levels have lined up behind Trump, promoted his “stolen election” lie and opposed any investigation of the January 6 coup. At every point, they have been emboldened by the feckless response of the Biden administration and the Democratic Party. In the name of “unity” and “bipartisanship,” the Democrats have sought to cover up the scale of the conspiracy to overthrow the Constitution and impose a fascist dictatorship and sought to lend legitimacy to Trump’s Republican accomplices.

Last week, House Minority Leader Kevin McCarthy, under instructions from Trump, withdrew the five Republicans he had nominated to the committee after House Speaker Nancy Pelosi rejected two of Trump’s most rabid defenders, Jim Jordan of Ohio and Jim Banks of Indiana.

The only two Republicans on the committee, Liz Cheney of Wyoming and Adam Kinzinger of Illinois, both vocal critics of Trump and the “big lie” of the “stolen election” and both appointed by Pelosi, are the exceptions proving the rule of the fascistic transformation of the Republican Party behind Trump. Both are also right-wing military hawks and diehard proponents of social austerity and corporate interests.

McCarthy held a press conference just before the opening of the committee hearing. Along with the five Republicans he had named to the committee and other House Republican leaders, he denounced the hearing as a partisan witch-hunt and demanded an investigation of Nancy Pelosi’s alleged failure to protect the Capitol from the insurgents. He ignored the fact that they had been summoned by Trump to kidnap and/or kill Pelosi and other officials, including then-Vice President Mike Pence.

In the afternoon, the openly fascist faction of the House Republicans, led by Marjorie Taylor Greene of Georgia, held a press conference in front of the Justice Department to defend what they called the “political prisoners” arrested and imprisoned for their roles in the January 6 assault on Congress. She was joined by Paul Gosar of Arizona, Matt Gaetz of Florida, Louie Gohmert of Texas and Bob Good of Virginia. The event was cut short when counter-protesters moved in toward the speakers.

These developments followed a series of fascist tirades by Trump in which the ex-president essentially defended the insurrection and called on his supporters to halt the supposed takeover of America by the godless, “communist” Democratic Party. Last week he was quoted as calling the January 6 rioters a “loving crowd” and acknowledging that “they wanted what I wanted.”

The performance of the Democrats at Tuesday’s hearing underscored their spineless and two-faced response to Trump and the Republicans. In the course of the three-and-a-half-hour hearing, none of the Democrats uttered Trump’s name. They drew no conclusions from the Republican Party’s near-universal lineup behind him. Instead, they featured Cheney as proof of “bipartisanship.”

It was Cheney who, in her opening statement, demanded a full investigation of Trump’s role. The committee had, she said, to examine “every minute of that day in the White House, every phone call, every conversation, every meeting leading up to, during and after that attack.” She said the committee had to issue and enforce subpoenas promptly and warned that the alternative was to face the “threat of more violence in the months to come and another January 6 every four years.”

The Democrats deliberately framed the hearing in the most conservative and patriotic manner possible, hailing the police as the bulwark of democracy, and seeking to present themselves, not the Republicans, as the true patrons of the police.

Over the past six months, the Democrats have suppressed a series of damning revelations exposing the deliberate stand-down of the U.S. Capitol Police and the presence of fascistic elements among both the commanders and the ranks.

Similarly, they have downplayed testimony at congressional hearings proving that Trump-appointed Pentagon leaders ignored desperate pleas from Democratic leaders, Mike Pence and the commander of the D.C. National Guard to authorize the deployment of troops to clear the Capitol.

Instead, they delayed the dispatch of troops for more than three hours, allowing the fascists to rampage through the Capitol in search of elected officials to kidnap or kill. They authorized the deployment only after it had become clear that the attack had failed in its immediate goals, and Trump himself had emerged to call it off.

The response of the Democratic Party is determined by the class interests it represents. It is a party of the US corporate-financial oligarchy, the military and the intelligence apparatus. On all basic questions, the Biden administration is continuing the policies of Trump.

It has openly adopted the murderous herd immunity policy of reopening businesses and schools regardless the human cost. It has stepped up Trump’s anti-China policy, promoting the lie that the virus originated in the Wuhan Institute of Virology in order to divert attention from its own responsibility for mass death and whip up a war fever against the biggest global rival of US imperialism.

Meanwhile, the stock market continues to soar, fueled by endless injections of cash by the Federal Reserve and the lifting of pandemic relief programs to force workers back into unsafe factories, offices and schools. Billionaires like Bezos and Musk continue to profit from social devastation and mass death.

Biden and the Democrats have all but dropped their pretense of defending youth and workers against police violence and instead have sought to outflank the Republicans from the right as the true defenders of law and order, including sanctioning the channeling of hundreds of billions in pandemic relief funds to local police departments.

American democracy is rotting on its feet, not because of Donald Trump as an individual. He is a symptom, not the disease. The disease is the insoluble crisis of American and world capitalism, intensified by the global COVID-19 pandemic.

The Democrats oppose any serious fight against Trump and fascism for fear of the already rising tide of working class militancy and resistance. That, however, is the real basis for defeating the danger of fascism and dictatorship.

The Socialist Equality Party is fighting for the mobilization of the working class in defense of democratic rights through the conscious struggle for workers’ power and socialism.

https://www.wsws.org/en/articles/2021/07/2...
Add Your Comments
Support Independent Media
We are 100% volunteer and depend on your participation to sustain our efforts!