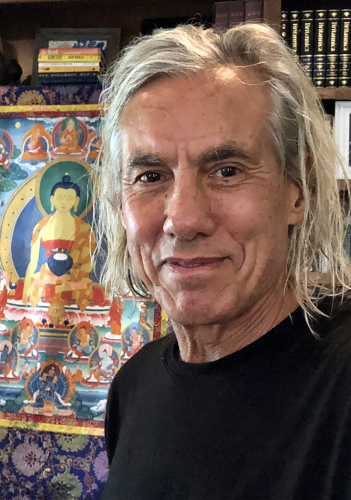 Alan Clements has been on a quest for freedom that’s taken him to Burma (now Myanmar), Yugoslavia, Australia, Bali and even here, to Santa Cruz. He’s been a Buddhist monk, a performer and an investigative journalist in areas of war and extreme conflict. Clements’ books, stage performances and World Dharma meditation retreats have always grappled with the challenge of living open-hearted and authentic in a world of suffering and violence.

His latest book - Extinction X-Rated - was written during the pandemic and according to Clements was “LSD inspired.” He describes the book as part autobiography and partly an “auto-fictional dark satire about good and evil.”

“Spiritually Incorrect” is the name of the improvised “anti-performance” monologues that Clements has staged around the world, including at the local Rio Theatre. It’s also the name of a documentary he’s just released about his life experiences as a Buddhist monk, journalist and activist performer.

EXCESSIVE MEDITATION DYSFUNCTION
In Extinction X-Rated Clements writes that his life path shifted in 1979; “I had had enough of the American Scream. And I ordained as a Buddhist monk in New York City and flew off the next day with my preceptor - Mahasi Sayadaw - to Burma.” Clements was twenty-nine years old. He adds, “I can hardly imagine I chose to leave L.A. to live in one of the most politically-volatile, dangerous and unhealthy environments in the world, and to find inner peace, no less.”

Clements’ description of monastic life is painfully hilarious. He recounts the extreme challenge of the twenty-hours-per-day of sitting and walking meditation with only four hours of sleep. Not to mention celibacy and no meals after noon. Clements writes that he only survived initially by sneaking out for opium cigars. Now he looks back and wonders if he didn’t overdue the mindfulness practice, causing what he calls “excessive meditation dysfunction.”

SHARED SONIC HYMN
“In my own progression, meditation has gone from a practice to a way of being that's trans-posture, trans-training, trans-practice. And maybe that's the way it is for everyone,” Clements told the Sentinel. “I look at some of these classical Buddhist texts and suttas and it's all about the sonic, auditory, vibrational exchange between a man known as the Buddha and his disciples. And they're relating in this animated, shared space. It's a shared sonic hymn.”

Clements elucidates, “One of my favorite discourses attributed to the Buddha is called the Tuvataka Sutta. The Buddha duplicates his body and allows the devas and brahmas to overhear a dialogue between himself and the created energy. That's so far out. Mahasi Sayadaw gave the same talks and it was a very rare discourse. He said, “It's called the Listening Up.” To be so available to the possibility of increasing insight, wisdom and liberation through shared space. To hear the words as vibrational frequencies that interact with your own fear, doubt, critical thinking, your own mindfulness.”

“Oxygenate your mindfulness with wisdom and maybe you'll be enlightened, too,” offers Clements. “It’s very different than sit, walk, eat, sleep, get up, practice and maybe at the end of the three-month retreat you'll have some insight. That's very different than the immediate, non-postponed availability to the psychic-intuitive-feminine.”

YOUR OWN CHOSEN FUTURE
Clements wrote Extinction X-Rated during the pandemic while living in Santa Monica. “I channeled this book,” he recounts. “I said to myself, “Just do the acid and let it come through you as you feel it.” This book is about my metaphysical Rocky moment and his theme was never give up. Let no obstacle come between you and your dream, the dream of Nibanna. The dream of your own chosen future.”

“Extinction X-Rated deals with something that few satirists ever deal with, which is the sixth mass extinction,” Clements explained. “And this extinction that we’re facing now isn't just about environmental collapse. It's also the Buddhist Pali word Nibbana, which refers to the extinction of greed, fear, delusion. So, it has those two meanings.”

Clements views his new book as partly a dystopian warning à la “1984” and “A Clockwork Orange.” He explains, “Satire is an incredibly complex art form. It's like lying truthfully. You get to really exaggerate, create sharp edges and juxtapositions. So, what is an appropriate edge of exaggeration? I had to really look carefully at the history of gallows humor during the Holocaust. I found that even within Dachau and Auschwitz, walking to the gas chambers, there were those rare people with dark gallows humor, and it was overheard by someone and it was preserved.”

ARMED TO THE TEETH
Clements expressed dismay about the recent turn of events in Myanmar in February when there was another military coup and Aung San Suu Kyi was once again arrested. She remains under house arrest while popular protests against the coup have grown. “Burma is dealing with a totalitarian government now, armed to the teeth with the most sophisticated weapons from China, Russia, Ukraine, Israel and Turkey. The people have no guns, no training. And they're pacified by decades of obedience to a vicious, dictatorial psychology. They learned that if you speak out or sing creatively, you're dead,” Clements says. “I interviewed over two hundred former political prisoners, some of them young kids, arrested for drawings. And put into dog cages for fear that they could become revolutionaries for freedom, human rights and democracy.”

DHARMA OF RECONCILIATION
In 2012 Aung San Suu Kyi was elected to serve in the Myanmar government where she sat alongside military generals who’d previously ordered her own arrest and the torture of pro-democracy activists. In 2016 she was widely criticized for not being more assertive in denouncing and stopping the forced displacement and violence against hundreds of thousands of Muslims in Myanmar. A December 11, 2019 New York Times article refers to Aung San Suu Kyi, a Nobel Peace Prize recipient as, “an apologist for brutality.” Clements offers, “You cannot underestimate the horror of what happened to the Rohingya Muslims in the Rakhine state. That's a fact. But she did not collude with the evil military for their persecution. My book Extinction X-Rated is centered very primarily on Aung San Suu Kyi and her revolution of the spirit.”

“I had a broken heart for three years based upon her abject vilification,” says Clements. “I continue to support her now more than ever. It's turned out sadly that most of the world did not understand what she was doing. She was seeking genuine reconciliation with a sociopathic military government. And that's a tough call. She did it and no one really understood.”

Clements continued, “U Pandita, her meditation teacher and my teacher, architected what he called the Dharma of Reconciliation. The nonviolent motif of engaging evil. Not vilifying it, but taking the ancient “ubuntu” South African concept; “I cannot be free without you.” You can win by the gun, but it’s not a long-term solution.”

“When people ask how a peaceful Buddhist culture could kill its own people, I always point out that Burma was a quiescent, peaceful country until about 1823. That’s when Winston Churchill's father, who was the Governor General of India, decided that Burma was something to pluck out of the world and deliver to the Queen. And that's what he did,” Clements explains. “Burma is a thoroughly traumatized sovereign country, very much like Tibet.”

OCCUPY FREEDOM
Clements told the Sentinel he’s now facing a personal health crisis; “I've been diagnosed with a fatal illness, unexpectedly. I went to the emergency room recently here in Santa Monica. And it turned out the sharp pain in my chest was an acute ascending aortic aneurysm.”

He says he’s using all means necessary to deal with the difficult news, from doctors to Dhamma. “Meditation over the years, especially the last six months and since the diagnosis of a so-called fatal disease, has become what I call the non-apartheid approach to Dhamma. And the non-postponed occupation of freedom.” Clements pauses and adds, “Live and breathe impermanence, the emptiness of solidity. Non-self. We don't do what we do for freedom tomorrow. We do it for occupying freedom now. Quiver in that freedom.”

“Freedom is everything. Harriet Tubman, as we both know, carried a gun. Keep moving to freedom.” Clements submits, “The kids today have a formidable task; maintaining mind freedom and fighting the good fight of keeping alive the universality of human rights. Keep alive critical thinking, radical inquiry, deep reasoning, ethical doubt. And mindful intelligence. Mindfulness itself is not enough. It needs to be intelligent.” 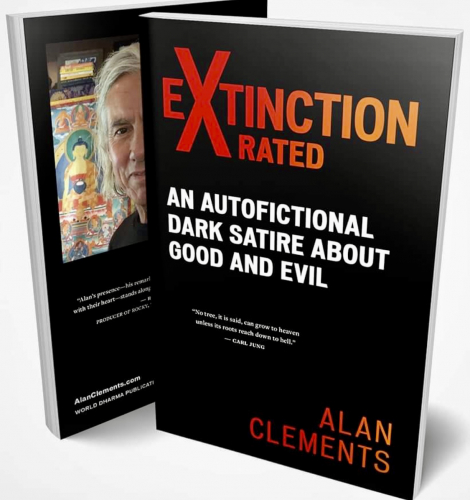 original image (1125x1196)
END_OF_DOCUMENT_TOKEN_TO_BE_REPLACED
§Alan Clements with Aung San Suu Kyi and others in Burma on Jan. 4, 1996. (Burma Project US
by John Malkin 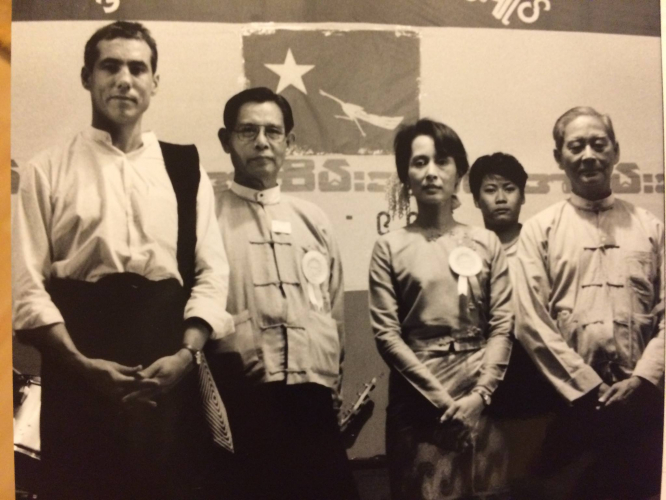