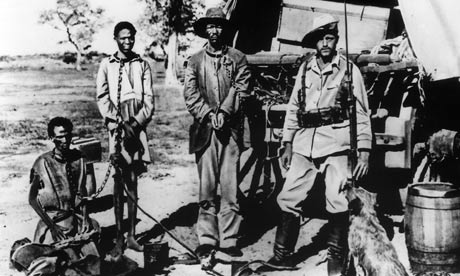 Namibian journalist and artist Kav Hambira discusses the history of Namibia including the role of German imperialism in the country.

In a recent Op-ed in the New York Times titled "Germany Apologized for a Genocide. It’s Nowhere Near Enough" Hambira and Kavena Hambira they discuss the struggle to force Germany to pay reparations for the genocidal crimes of German imperialism that South West Africa which is now Namibia faced.

Hambira discusses the history of imperialism and the apartheid system that Namibia and South Africa faced and the ongoing corruption crisis now engulfing Namibia, South Africa and many other countries in Africa. He also discusses the role of the working class in solving the economic and poltiical crisis.

This interview was done on 7/15/21 by WorkWeek's Steve Zeltzer.

Swapo, what is 'Socialism with a Namibian Character’?
https://www.namibian.com.na/183845/archive-read/Letter-of-the-Week--Swapo-what-is-Socialism-with-a-Namibian-Character

Germany Apologized for a Genocide. It’s Nowhere Near Enough.
https://www.nytimes.com/2021/07/08/opinion/germany-genocide-herero-nama.html
July 8, 2021
By Kavena Hambira and Miriam Gleckman-Krut
Mr. Hambira is an artist and the chair of the Namibia Institute for Democracy. Ms. Gleckman-Krut is a Ph.D. candidate in sociology at the University of Michigan who writes about violence, gender and the state.
More than a century ago, Germany carried out a systematic massacre. From 1904 to 1908, in what is now Namibia, the German colonial government killed about 80,000 Herero and Nama people.
In May, 113 years later, Germany at last acknowledged this massacre as genocidal. “In light of Germany’s historical and moral responsibility,” said Germany’s foreign minister, Heiko Maas, “we will ask Namibia and the descendants of the victims for forgiveness.” With this request for forgiveness came a “gesture” of $1.35 billion, to be spent on reconstruction and development projects and health care and training programs over 30 years.
The Namibian government accepted. But many Nama and Herero feel it is nowhere near enough. Nandiuasora Mazeingo, chair of the Ovaherero Genocide Foundation, called the agreement “an insult.” After all, the sum is comparable to German development aid to Namibia over the past 30 years — and the negotiations largely excluded Herero and Nama people. More than a century after the massacre, Germany’s apology falls far short.
One of us, Mr. Hambira, is a descendant of Herero survivors, while members of Ms. Gleckman-Krut’s Jewish family were killed in the Holocaust. We have a personal sense of the devastation Germany has wrought. To begin to atone for its Namibian genocide, it must negotiate directly with descendants of survivors — and commit to wide-ranging reparations.
Toward the end of the 19th century, German leaders sought what would soon be called “Lebensraum,” a “living space” outside their industrializing and overpopulated homeland. The Berlin Conference in 1884, where European colonizers divided up the African continent, provided an opportunity: Germany officially claimed the regions, which it called German South West Africa, where roughly 80,000 Herero and 20,000 Nama people lived.
Nama and Herero leaders such as Hendrik Witbooi and Samuel Maharero marshaled their people’s resistance to the colonizers. In 1903, a full-fledged revolt broke out.
Brought in to quash the rebellion, Gen. Lothar von Trotha won a decisive battle at Hamakari in August 1904. Then, in October, he issued an extermination order. Authorized by Berlin, German troops used machine guns, rifles, cannons and bayonets to massacre unarmed women, children and men. Families were forced to flee into the scorching Omaheke desert, where troops cornered them and poisoned their water holes. Soldiers killed parents in front of their children.
Von Trotha confined surviving Nama and Herero to camps, where captives were worked brutally hard and subjected to medical experiments. Some were sterilized; others were injected with arsenic and opium, or deliberately infected with smallpox, typhus and tuberculosis. An all-female camp was established for the purpose of sexual violence.
Death was no reprieve: Germans sold the skulls of the people they had slain to research institutions overseas. By 1908, the German colonial government had killed 80 percent of the Herero and 50 percent of the Nama populations. This was the first genocide of the 20th century.
More than a century of German denial has left much of the world unaware of the massacre. Today the sites of former concentration camps, such as those in Swakopmund and Lüderitz, are tourist destinations rather than memorials. While the Museum of Natural History in New York continues to conduct research on the human remains Germany stole, Herero and Nama have been denied for generations the opportunity to bury their loved ones. Many Nama and Herero live on unproductive soil, barred from the land taken from their ancestors. Most are disenfranchised minorities within Namibia or spread across the diaspora.
Some 30 years after the massacre in German South West Africa, Nazis murdered six million Jews. The two genocides are related. For it was in southern Africa that Eugen Fischer, later a prominent Nazi eugenicist, pioneered the pseudoscience about “racial hygiene” used to justify the slaughter of people Germans saw as an obstacle to Lebensraum — first the Herero and Nama, and later the Jews. Some techniques of slaughter, too, were first used in the colony: Victims were sent to concentration camps in cattle cars,tattooed and issued numbers, as they later were in Europe. Between the two atrocities, despite their differences, is a continuum in method and motive.
Germany’s response to this history, however, has been starkly different. Seven years after the Holocaust, in 1952, West Germany signed an agreement with 23 Jewish organizations and the Israeli government to pay reparations for the material losses suffered by Jewish individuals and people. In the years since, school curriculums, museums and memorials have placed the Holocaust at the center of national remembrance. Though insufficient, and unable to eliminate anti-Semitism, Germany’s efforts provide a baseline model for how to make amends for a historical atrocity.
As it did with Jews after World War II, Germany should meet with representatives from Herero and Nama communities to design reparations, taking into account both the material damages of genocide and the psychological and spiritual suffering caused by more than a century of denial.
These could take many forms: Germany could commit to direct compensation, work to return the land robbed from Herero and Nama people and return the skulls of those killed in German concentration camps. Germany could also integrate the Namibian genocide into its national narrative, through public education and commemoration, and build memorials at the sites of former concentration camps.
But to truly seek forgiveness and address the disaster it caused, Germany must first do something simple: Look Herero and Nama people in the eye, and listen to what they say.
https://youtu.be/_0W6wTGidlA
§German Imperialism & The Slavery Of Namibian People
by Labor Video Project
Friday Jul 16th, 2021 8:46 AM 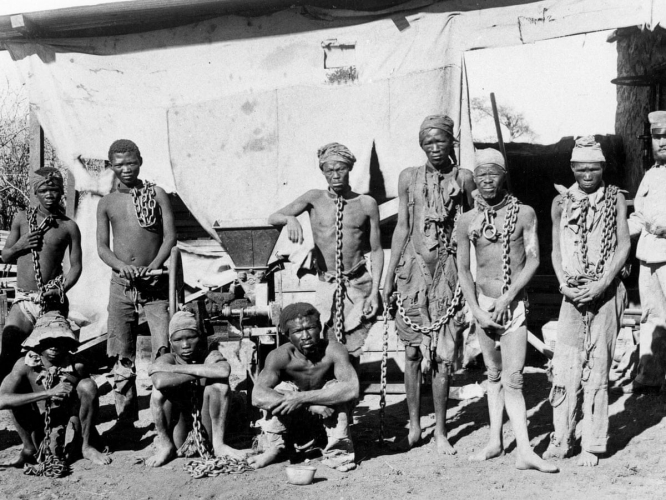 original image (1200x900)
German imperialism held the Namibians in slavery during their imperialist occupation and now Namibian people are demanding reparations directly to their families.
https://youtu.be/_0W6wTGidlA
Add Your Comments
Support Independent Media
We are 100% volunteer and depend on your participation to sustain our efforts!