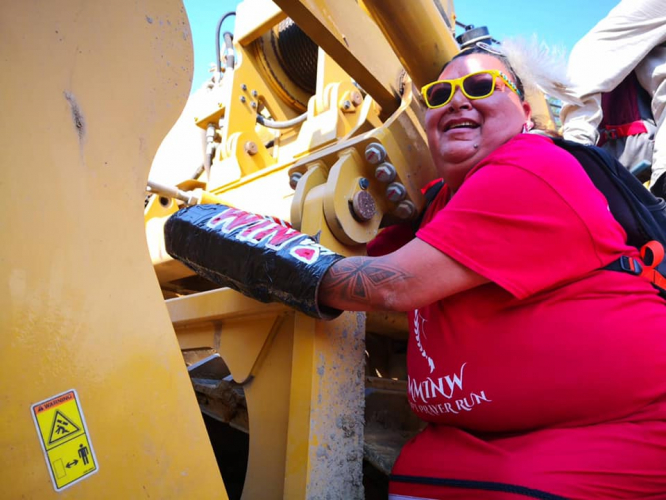 (Park Rapids, MN) Today, dozens of water protectors flowed over a Line 3 construction site while one Native matriarch locked to heavy equipment and the executive director of Rainforest Action Nework risked arrest, halting construction. The action comes as Enbridge has begun drilling over 20 rivers and 800 wetlands in Anishinaabe treaty territory.

Sheriffs in Hubbard County continue to blockade Giniw Collective’s Native-led resistance camp from accessing their own land by stating they cannot return by vehicle once they leave home.

A dozen people were arrested in their driveway on Monday night; Hubbard County police sent a riot line. Police continue to barricade Namewag, the Native-led encampment who owns the land, into their property. One water protector was pulled over this morning by Hubbard County as they left camp, the sheriff claimed they “violated the easement”. Governor Walz and Lt. Gov Peggy Flanagan remain silent about the ongoing gross abuse of power by the Hubbard County Sheriff.

Actions continue against Line 3, which has yet to receive any comment from the White House. While the federal and state administrations pledge action on violence against Native women, there are nearly 5000 employees in northern Minnesota building Line 3, most of whom are from out of state. A second sex trafficking ring that included Enbridge employees was busted on Monday.

Mama Julz, Oglala Lakota, founder of Mothers against Meth said, “We’re not going to stop this pipeline by prayer only. Prayer and action go hand in hand!”

Ginger Cassidy, Executive Director of Rainforest Action Network said, “This pipeline is a violent assault on Indigenous People and their treaty rights and a climate catastrophe that threatens all of us. Climate chaos is already causing real world suffering and massive new fossil fuel expansion like this is completely reckless. Biden and the Banks financing this project must withdraw support for Line 3 immediately.”

Giniw Collective is an Indigenous-women, 2-Spirit led frontline resistance to protect our Mother, defend the sacred and live in balance. We stand unafraid. Prayers into action. Follow us on Facebook, Twitter, or Instagram @GiniwCollective
https://bsnorrell.blogspot.com/2021/07/nat...
§
by Giniw Collective
Thursday Jul 1st, 2021 9:58 AM 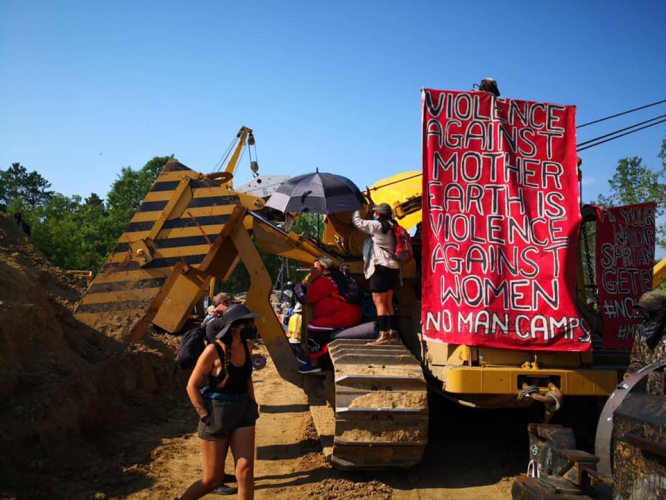 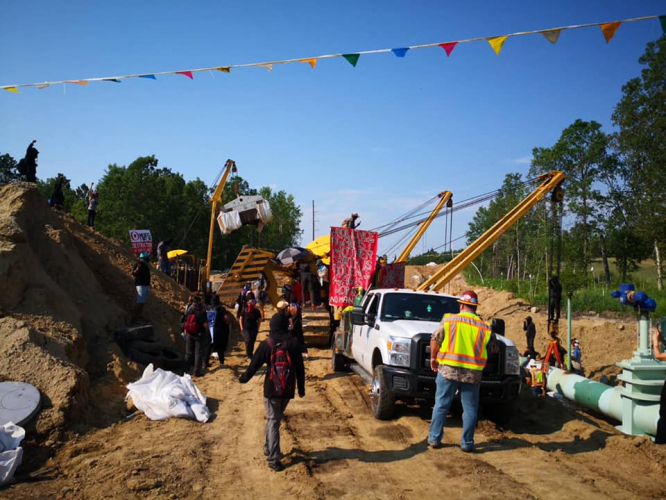 original image (960x720)
https://bsnorrell.blogspot.com/2021/07/nat...
Add Your Comments
Support Independent Media
We are 100% volunteer and depend on your participation to sustain our efforts!