Add an Event
Newswire
Calendar
Features
Home
Donate
From the Open-Publishing Calendar
From the Open-Publishing Newswire
Indybay Feature
Related Categories: San Francisco | Education & Student Activism | Racial Justice
California Buffalo Soldier's Trail - National Buffalo Soldier's Study
by Khubaka, Michael Harris
Thursday Jul 1st, 2021 9:33 AM
In California, Buffalo Soldiers protected our National Parks such as Yosemite and Sequoia serving as Park Rangers in the Sierra Nevada during the summer and were housed in the Presidio in San Francisco and Presidio in Monterey. 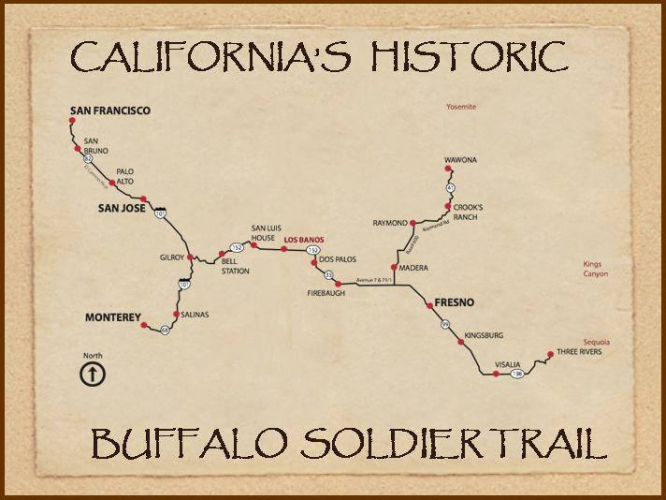 original image (712x534)
National Buffalo Soldier's Day is July 28 and commemorates the formation of the first regular Army regiments comprised former US Colored Soldiers after the US Civil War.

On September 21, 1866, seventeen months after the end of the US Civil War, Congress established these regiments who were the first peacetime, Black regiments with White Officers in the regular U.S. Army.

The Apache used the term because the soldiers had curly hair like bison. Yet another source recalls the Plain Indians using “Buffalo Soldiers” due to the coats they wore during the winter and courageous way the fought, like the Buffalo. No matter how the soldiers earned the name, they were committed to serving the country and sought to become a part of the great legacy of the United States Army.

He earned a commission as a 2nd Lt. in the Army. Under President Bill Clinton, Flipper was posthumously pardoned in 1999 after a review of an “unduly harsh and unjust” court-martial and dismissal from the Army.

The 9th and 10th Cavalry plus the 24th and 25th Infantry participated in winning dozens of battles large and small against ‘hostile’ Native Americans who wanted to leave the reservation during the Indian Wars.

For example, Troops H and I of the 10th Cavalry fought so gallantly against hundreds of Natives at the Battle of Beaver Creek that they were thanked in a Field Order by General Philip Sheridan. By 1880, the Buffalo Soldiers, following orders, minimized Native resistance in Texas, Oklahoma, and Montana.
They built and/or served at Fort Sill in Oklahoma and Fort Huachuca in Arizona.

In 1903, President Teddy Roosevelt toured San Francisco, dedicating
Dewey Statue in Union Square and the Buffalo Soldiers served as Honor Guard under the Command of Colonel Charles Yound.
Later that year, the Buffalo Soldiers protected some of our National Parks such as Sequoia and Yosemite from wildfires and poachers, building and protecting trails through the Sierra Nevada during the summer. They were housed in the Presidio Army Post in San Francisco and Presidio in Monterey during the winter.

In WWI, the Buffalo Soldiers were relegated to defending the Mexican border. They trained for overseas deployment and combat in WWII but were deactivated in 1944 at Camp Lockett, San Diego.

The Buffalo Soldiers are US Veterans who served our country with distinction and honor. They had the lowest military desertion and court-martial rates of their time. Many earned the Congressional Medal of Honor, an award presented in recognition of combat valor which goes above and beyond the call of duty.

https://www.nps.gov/subjects/buffalosoldie...
Add Your Comments
Support Independent Media
We are 100% volunteer and depend on your participation to sustain our efforts!