Add an Event
Newswire
Calendar
Features
Home
Donate
From the Open-Publishing Calendar
From the Open-Publishing Newswire
Indybay Feature
Related Categories: U.S. | Labor & Workers
Hotel chains plan to lay off housekeepers in post-pandemic restructuring
by Alex Findijs (WSWS repost)
Wednesday Jun 23rd, 2021 3:35 AM
Major US hotel chains are making use of the collapse of business during the COVID-19 pandemic to permanently eliminate hundreds of thousands of housekeeping jobs. 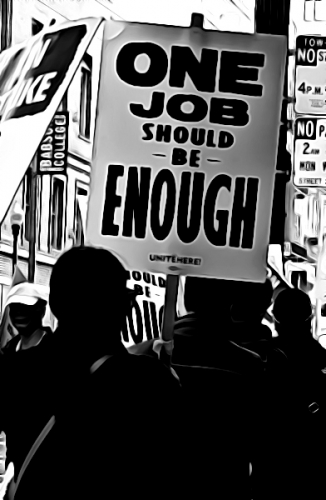 Major US hotel chains are making use of the collapse of business during the COVID-19 pandemic to permanently eliminate hundreds of thousands of housekeeping jobs.

An estimated 3.1 million hospitality and leisure workers have been laid off since March of 2020, accounting for 39 percent of the total number of unemployed in the United States. These are among the lowest paid and most oppressed sections of the working class.

The largest US hotel chains lost an estimated $14 billion in revenue in 2020, according to Travelweek Group, which estimates it will take three years for the industry to recoup the shortfall. As in other sectors of the economy, hotel industry companies are seizing on the crisis to drive up profitability by reducing labor costs.

Hilton Chief Executive Chris Nesetta told investors in February, “The work we’re doing right now in every one of our brands, including Tru and Hampton, everything else is about… creating more labor efficiencies, particularly in the areas of housekeeping, food and beverage and other areas.”

He continued, “When we get out of the crisis, those businesses will be higher margin and require less labor than they did pre-COVID.”

The same strategy is being adopted by other firms. Park Hotels and Resorts, which owns dozens of high-end and luxury hotels around the world, informed investors that it would be protecting profitability through a permanent reduction in full-time staff, saving an estimated $70 million in labor costs every year.

This restructuring is taking the form of a transition to “opt-in” housekeeping, in which rooms will be cleaned daily only if specifically requested. Daily cleanings are to be largely replaced by cleanings only after check-out.

This impact on hundreds of thousands of cleaning staff who work at hotels will be brutal. The union Unite Here, which represents 300,000 hospitality workers, estimates that ending daily cleanings will likely eliminate at least 39 percent of cleaning jobs at hotels, some 181,000 jobs.

But instead of mobilizing workers to oppose the planned cuts, Unite Here is focusing its efforts on working with management to promote the “Save Hotel Jobs Act,” which would provide millions of dollars in public funds to hotels to cover payroll costs for rehired workers. There is no language in the bill guaranteeing that all laid-off workers will be reinstated, implying on the contrary that only some workers will be rehired.

This is yet another attempt by the trade union bureaucracy to prevent workers from mobilizing their industrial power against the corporations and instead channel opposition behind the Democratic Party, itself a party of Wall Street and the corporate elite. The Biden administration has made clear its support for the early termination of supplemental unemployment benefits being implemented mainly by Republican-controlled states and announced its intention to end the program nationally on September 6. It is overseeing as well the ending of pandemic restrictions of evictions at the end of June.

These policies are calculated to blackmail workers into returning to unsafe factories, schools and work locations under threat of starvation and homelessness, as all safety measures imposed during the pandemic are lifted, in defiance of warnings by epidemiologists of the potential for new outbreaks and hundreds of thousands of more deaths from more deadly variants of the coronavirus.

When workers do return, they will be confronted with lower wages, longer hours and greater speedup.

The changes being prepared by the hotel magnates will mean increased workloads and more dangerous workplace hazards. By cleaning rooms every day, housekeeping staff are able to mitigate the buildup of garbage and dirt in rooms. Under the new model, the health and safety of cleaning staff will be put at risk as they are forced to do more cleaning in less time.

The job cuts will affect some of the most exploited workers in the country. The average wage for a hotel cleaner is around just $25,000 a year, below the federal poverty line of $26,200 for a family of four.

More than 86 percent of hotel cleaners are female and 25 percent are Hispanic, the second largest demographic. Many are immigrants from Mexico or South America. The average age of these workers is about 45, making a career change much more difficult.

The hotel chains, worth billions of dollars, have been given huge federal bailouts under the 2020 CARES Act and other bipartisan pandemic programs. The two big business parties placed no restrictions on their using the billions in taxpayer money to prepare a further attack on the jobs and living standards of their workers.

Hundreds of millions of dollars were given to hotels under the misnamed “Paycheck Protection Program,” presented to the public as a lifeline for small businesses and their employees. Loans to units of major national chains covered at least 2.5 times their monthly payroll costs through forgivable loans.

These government handouts have enabled hotel chains to increase their profitability despite the sharp decline in business over the previous 15 months. According to the industry website Hotel Management, hotel profit margins were 30.6 percent in April of this year, with a profit of about $35.45 per room. With the number of vaccinated Americans rising and pandemic restrictions being lifted, the industry is experiencing a sharp rebound in occupancy.

In an industry with 5.29 million rooms in the US, which generated upwards of $200 billion in revenue in the years before the pandemic, there is more than enough money to provide decent wages and benefits to all hotel staff.

According to STR, a business data firm, the hotel industry in the US generated $59 billion in earnings before interest and tax in 2017.

Instead, the industry is seizing upon the pandemic to permanently remove a large segment of its workforce. In doing so, it hopes not only to cover losses from the pandemic, but permanently raise its profit margin and increase the fortunes of its major investors and bankers.

This is welcome news to the vultures in the fast food and other service industries, who are gratified by the prospect of hundreds of thousands of low-paid workers suddenly finding themselves in desperate need of a job.

https://www.wsws.org/en/articles/2021/06/2...
Add Your Comments
Support Independent Media
We are 100% volunteer and depend on your participation to sustain our efforts!