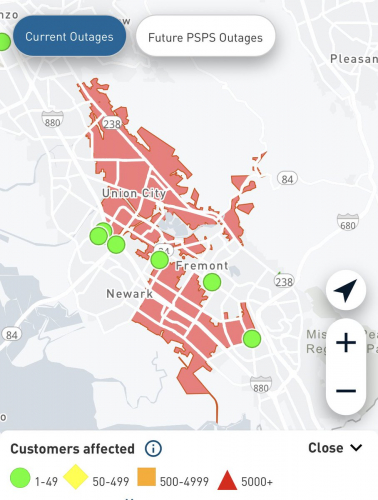 Oakland - As people in Oakland try to celebrate the new federal Juneteenth holiday on Saturday June 19, 2021, at Lake Merritt, during the past 24 hours there are reports of power outages occurring in the cities of Oakland, San Francisco, San Leandro, Hayward, Fremont, Union City, San Jose, Santa Clara, and Sacramento, according to Down.detector.com.

Additionally, according to a news report during the past two hours, around 50,000 people in some cities of Alameda County are experiencing power outages this evening which shut down the South Hayward BART Station around 9:00PM. A PG&E power outage map may be found by clicking here.

Meanwhile, residents in the Oakland neighborhood near 8th Avenue and East 19th Street received threatening notices from PG&E in the mail dated June 16, 2021. On the envelope in big red letters it states, “Temporary Power Outage In Your Area”, OPEN IMMEDIATELY.

In part the notice states, “PG&E will be temporarily interrupting your electric service in order to safely perform the following work in your area.

It appears that the power will be out for the PG&E customers near 8th Avenue and East 19th Street for around 8 hours, or perhaps more, or less, on June 28, 2021.

According to the threatening notices, PG&E is not offering to cover the costs or reimburse people for any spoiled food that may occur in people’s refrigerators when they cut the power off in their homes and apartments for around eight hours on June 28, 2021.

According to the Food Safety Information Council, some food spoils in a refrigerator after four hours, and should be thrown out after four hours without electrical power.

Additionally, another site claims, “Your refrigerator will keep food safe for up to 4 hours without power if you don't open the door. Throw out the following foods: All perishable foods (including meat, poultry, fish, eggs, and leftovers) in your refrigerator when the power has been off for 4 hours or more.” Or an additional site states, “If the power was out for no more than 4 hours, refrigerated food should be safe as long as the doors were kept closed. ... Discard any perishable food (such as meat, poultry, seafood, milk, eggs, or leftovers) that has been at refrigerator temperatures above 40°F for 4 hours or more.”


That’s right. The electric service will be interrupted on Monday, June 28, 2021, from 9:00AM to 5:00PM, for the residents near 8th Avenue and East 19th Street, and the notice from PG&E does not state that PG&E is willing to cover the cost for perishable items in peoples refrigerators. The cost of food has been skyrocketing during the pandemic and people are suffering.

Now comes PG&E to add to the stress and suffering that people are already experiencing. This is a real hardship for poor people who do not have cars to go and replace their spoilt food, or the poor folks who use oxygen machines to keep themselves alive in the neighborhood.

In spite of threatening to cut off the power for eight hours to the Oakland residents in the area of 8th Avenue and East 19th Street on Monday, June 28, 2021, PG&E has the nerve to state, “We greatly appreciate your cooperation and thank you for your patience. For outage questions, please contact the number below. For general questions about PG&E service, call our customer service center at 1-800-743-5000.

Meanwhile, as PG&E turns the screws on the poor and threatens to cut off their power while their bills are paid up to date, according to the Mercury News, “William Smith, who was interim PG&E chief executive officer during 2020, captured $6.17 million in pay, as measured by his total direct compensation, according to a company filing with the Securities and Exchange Commission. Smith took over as interim — and temporary — CEO in June 2020.”