Add an Event
Newswire
Calendar
Features
Home
Donate
From the Open-Publishing Calendar
From the Open-Publishing Newswire
Indybay Feature
Related Categories: Santa Cruz Indymedia | Police State & Prisons
Santa Cruz Grand Jury Finds Board of Supervisors Has Failed to Properly Oversee County Jail
by Santa Cruz Police News
Saturday Jun 19th, 2021 1:58 PM
Due to a number of disturbing incidents occurring in the Santa Cruz County Main Jail over the past four years, the Santa Cruz Civil Grand Jury has found that the County Board of Supervisors has, "failed to assert and exercise proper oversight within their purview of the Main jail." This week, the Grand Jury released its new report titled, "Justice in the Jail," which cites a number of incidents, including inmate deaths. The report concludes: "we have a problem." (Photo: Summary of the Santa Cruz Civil Grand Jury report "Justice in the Jail." Read the full report below)

Incidents addressed in the Grand Jury's report include:

- Allegations of sexual assault and/or illegal sexual conduct by Corrections Officers (COs) in 2017 and in 2020 resulting in convictions.

- An inmate assaulted by other inmates in 2018

- A suicide and then a homicide where discovery was delayed for over 30 hours, both occurring in a two day period in October 2019.

- The death of an inmate diagnosed with mental illness in May 2020.

- A total power outage where power was not restored for over 24 hours in September 2019.

- Within six months the Board of Supervisors should either establish a Sheriff Oversight Board or Inspector General as provided in Government Code § 25303.7, or alternatively place the issue before the voters in the county.

- Within six months the Board of Supervisors should agendize and open for public comment issues raised by Government Code § 25303.7.

- Within six months the Sheriff should propose for the Board of Supervisors’ review and approval an increase in Correction Officer staffing and associated budget to reduce the need for mandatory overtime and to sufficiently staff the Main Jail.

- Within six months the Sheriff should amend the Correction’s Policy Manual to remove inapplicable provisions and to add provisions relating to razors that more effectively limit and control the conditions of their use by inmates.

- Within three months the Sheriff’s Office and the General Services Department should establish formal protocols for regular monthly meetings to review the status of all correctional facilities, including providing estimates of completion for any repairs and/or replacements that are outstanding, and prioritizing items that directly affect the health and safety of inmates and/or staff. Such meetings should be documented and open to inspection by the County Administrative Officer and the Board of Supervisors.

- Within 60 days the Sheriff’s Office and the General Services Department should provide a written report to the Board of Supervisors and the Chief Administrative Officer providing both the specifications for, and a timeline for completion of each stage of the project to replace and/or repair the backup emergency power system, and thereafter update such report every thirty days until such project is completed.


More information about the Santa Cruz Civil Grand Jury can be found on the County of Santa Cruz website: 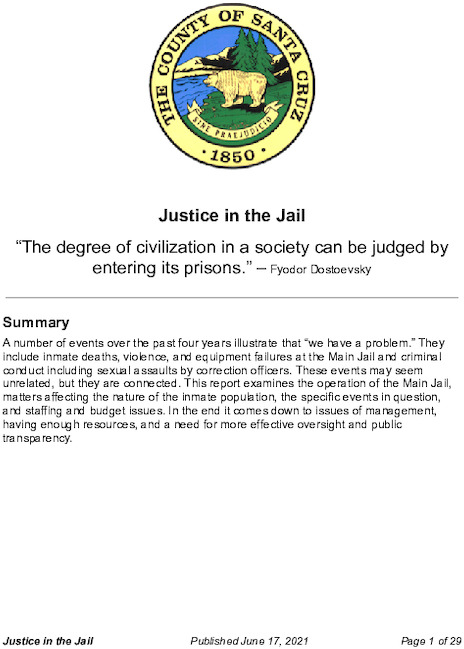 Download PDF (605.3KB)
Add Your Comments
LATEST COMMENTS ABOUT THIS ARTICLE
Listed below are the latest comments about this post.
These comments are submitted anonymously by website visitors.