Add an Event
Newswire
Calendar
Features
Home
Donate
From the Open-Publishing Calendar
From the Open-Publishing Newswire
Indybay Feature
Related Categories: International | U.S. | Anti-War | Media Activism & Independent Media
NYT marks 50 years since Pentagon Papers, ignoring persecution of Julian Assange
by Bill Van Auken (WSWS repost)
Wednesday Jun 16th, 2021 9:07 AM
The New York Times marked the anniversary of its publication of documents exposing the government’s lies and criminality in the Vietnam War with a complicit silence on the imprisonment of Assange for doing the same in relation to Iraq and Afghanistan. 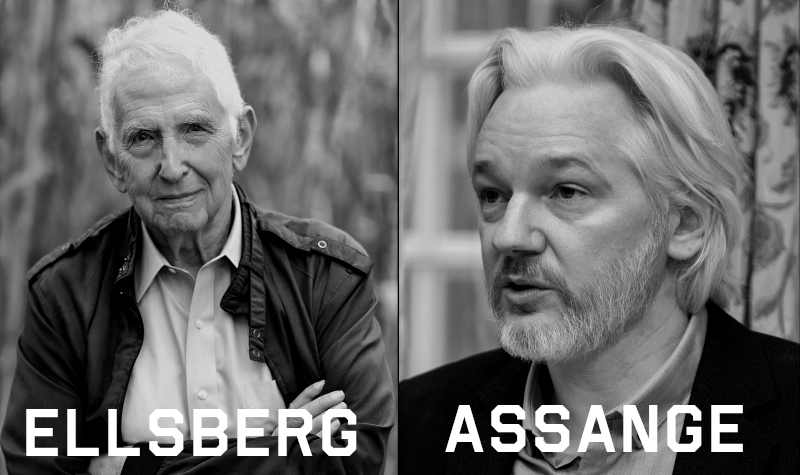 This week marks 50 years since the publication in the New York Times of the Pentagon Papers, which played a significant role in galvanizing popular opposition to the Vietnam War. The manner in which the Times itself chose to commemorate the anniversary provides a case study in the profound shift to the right by the media and the entire political establishment in the intervening five decades.

Nowhere is this shift expressed more nakedly than in the newspaper’s stony silence on the case of the imprisoned WikiLeaks editor Julian Assange, whose persecution by the US and British governments pose the issue of basic democratic rights to free speech and a free press even more sharply than the events of 50 years ago.

The Pentagon Papers, officially known as the “Report of the Office of the Secretary of Defense Vietnam Task Force,” was a 7,000-page internal study conducted by the Pentagon on the policies that led to the Vietnam war and it continuous escalation. Consisting of 4,000 secret US government documents and analysis, the report exposed the war’s criminality and the lies told to the American people to justify it.

The Pentagon Papers provided a damning indictment, not primarily of the Republican administration of President Richard Nixon, who had taken office in 1969, the eighth year of the US military intervention, but of his Democratic predecessors, particularly Lyndon Johnson, for invading Vietnam and waging a brutal colonial-style war against its people that would claim the lives of 3 million Vietnamese as well as 58,000 American soldiers.

The papers were secretly copied and then leaked to the Times by former Rand Corporation Pentagon consultant Daniel Ellsberg, who had become a determined opponent of the Vietnam War, prepared to place his life on the line to make these secret documents known to the American public.

The first installment of the Times’ reporting on the papers was published on June 13, 1971. The public impact of the revelations was immensely amplified by the Nixon administration’s quasi-dictatorial action of obtaining a court injunction enforcing prior restraint on further publication of the Times series. This act of censorship and abrogation of the First Amendment’s guarantee of freedom of speech and the press had virtually no precedent in the US.

Even as the Times was forced to halt publication, the Washington Post began publishing the papers, only to be hit with a similar injunction. Before the case was settled, the material had appeared in 19 different US newspapers. Within barely two weeks the injunctions were overturned by a 6-3 decision of the US Supreme Court.

In its 1971 editorial on the high court’s decision, the Times commented, “We believe that its more profound significance lies in the implicit but inescapable conclusion that the American people have a presumptive right to be informed of the political decisions of their government.”

Fifty years on, the owners and editors of the Times have thoroughly repudiated any commitment to this “presumptive right” in both words and deeds. The newspaper has served as an indispensable partner of the US government in promoting and fabricating lies used to justify imperialist wars, from the “weapons of mass destruction” that paved the way to a war that claimed the lives of a million Iraqis, to the current “Wuhan lab” propaganda campaign blaming China for the COVID-19 pandemic and the deaths of millions.

Speaking for the Times, former executive editor Bill Keller in 2013 defended the newspaper’s role as an instrument of state propaganda and a direct partner of the government in withholding information from the public: “We agree wholeheartedly that transparency is not an absolute good,” he wrote. “Freedom of the press includes freedom not to publish, and that is a freedom we exercise with some regularity.”

The statement came in the context of the exposure of Washington’s war crimes in Iraq and Afghanistan, massive US government spying on the people of the United States and the world and the global conspiracies of US imperialism. While the Times editor celebrated the newspaper’s collusion in suppressing such revelations, the Obama administration was pursuing the relentless persecution of those who had made this information public, principally Julian Assange, Chelsea Manning and Edward Snowden.

It was in this same reactionary vein that the Times marked the 50th anniversary of the Pentagon Papers. The principal essay in a special section published for the occasion was written by David Sanger, the newspaper’s national security correspondent.

Sanger lamented the emergence of “a whole new pipeline to the public that largely bypasses traditional journalistic safeguards—and that is already eroding the quiet give-and-take between government officials and reporters.”

Sanger, in addition to his writing for the Times, has taught at Harvard’s Kennedy School of Government, known for training future heads of state, top officials and generals from around the world, and is a member of both the Council on Foreign Relations and the Aspen Strategy Group. He is a personification of “traditional journalistic safeguards” and a favorite conduit for “leaks” and propaganda that the CIA and the Pentagon want published.

The emergence of the internet and sources of information outside of this cozy “give-and-take” threatened to undermine “the fragile post-Pentagon Papers understanding between the government and traditional news organizations,” Sanger writes.

He concludes the comment writing: “In 1971, when the Supreme Court ruled against the government’s attempt at prior restraint, these kinds of quasi-journalistic media outlets did not exist. And none of them have yet precipitated a legal showdown that might force a reconsideration of the Pentagon Papers case and its central protection of press freedom. But it is only a matter of time.”

What miserable cowardice and complicity! While Sanger mentions WikiLeaks four times in his comment, the name Julian Assange is deliberately omitted. The online version of the Times made the shamefaced addition of a photograph of Assange to Sanger’s piece. It still did not mention, however, that the WikiLeaks editor is currently being held for 22 hours a day in a 7 by 11-foot cell in Belmarsh, the UK’s harshest prison. He is awaiting possible extradition to the US where he faces an Espionage Act prosecution that could send him to jail for the rest of his life, precisely the kind of “legal showdown” that Sanger claims has not yet taken place.

For good measure, the Times marked the 50th anniversary by opening up its editorial pages to a guest column by Gabriel Schoenfeld, the former editor of the neoconservative Commentary magazine and Republican political adviser. The piece was titled, “Leaking the Pentagon Papers Was an Assault on Democracy.” The piece denounces Daniel Ellsberg as a “rogue actor” guilty of “illegally exploiting his privileged access to secret information.” In other words, he deserved the same treatment as Assange, prosecution under the Espionage Act and a potential death sentence.

Ellsberg was prepared to face that prospect. The case against him was thrown out in 1973 and he was spared the consequences, thanks to the gross misconduct of the government, which included sending the same operatives that would later carry out the Watergate break-in to burglarize his psychiatrist’s office in an attempt to dig up dirt to be used to blackmail or publicly smear him.

The Times neglected to inform its readers that in 2006 this same Schoenfeld used Commentary to denounce the newspaper’s own reporters and editors as traitors in the “war on terrorism” and call for their prosecution under the Espionage Act for exposing an illegal domestic spying operation mounted by the National Security Agency.

The “newspaper of record” is once again showing how broadminded it is toward those advocating methods associated with police-state dictatorship, even if it involves the potential execution of its own reporters. It did the same a year ago, inviting Republican Senator Tom Cotton from Arkansas to contribute an op-ed headlined “Send in the Troops,” calling upon President Trump to invoke the Insurrection Act of 1807 and send the Army into the streets to suppress protests against police brutality.

Unlike the Times, the man who made publication of the Pentagon Papers possible, Daniel Ellsberg, has remained true to the principles that guided his exposure of US crimes in Vietnam half a century ago. At the age of 90, he has made public fresh documents detailing plans by the US military to launch a nuclear war against China during the Taiwan Strait crisis of 1958. In doing so, he made clear that his decision was driven by the current US buildup to war against China and his conviction that those directing the Pentagon and the US government today were no less “stupid or thoughtless” than those who drew up plans to incinerate Shanghai then. Ellsberg has deliberately dared the government to once again prosecute him under the Espionage Act.

Unlike the Times, Ellsberg has unwaveringly opposed all those trying to draw some distinction between his leak of the Pentagon Papers 50 years ago and the publication of the Iraq and Afghanistan war logs and secret State Department documents by Julian Assange and WikiLeaks.

He testified last September via video link on Assange’s behalf at an extradition hearing held in London’s Old Bailey. He explicitly rejected the “‘good Ellsberg-bad Assange’ theory” in terms of exposing war crimes. He insisted that he and Assange shared “a great disagreement with not only the current administration but with all recent past administrations in the American government. Namely, that there was such a lack of transparency in government decision making, in really all of its declarations to the public—so many of them were untrue—as to the nature of the conflict, the prospects for success, what was being done in our names, that there was no effective democracy.”

The stark contrast between the attitude towards Assange on the part of Ellsberg and that of the Times only underscores the fact that within the American ruling elite and the corporate media, there exists no real constituency for the defense of the democratic principles involved in the Pentagon Papers case half a century ago.

Unprecedented social inequality, the dominant feature of US society, and the stranglehold over economic and political life by a financial and corporate oligarchy are incompatible with the defense of freedom of speech and the press, or any other basic democratic right.

The defense of these rights and the fight for the immediate release of Julian Assange can be carried forward only through the independent political mobilization of the working class on the basis of a socialist and internationalist program. Under conditions of a rising class struggle, these issues will become matters of burning importance for workers all over the world.

https://www.wsws.org/en/articles/2021/06/1...
Add Your Comments
Support Independent Media
We are 100% volunteer and depend on your participation to sustain our efforts!